Christian Atheists, Your Light Has Come

Here is an excellent article on the Gretta Vosper fiasco, "Unsuitable" Gretta Vosper is Why Mainline Denominations Are Dying by Christian Chiakulus.

Christian is a Christian Atheist.

Despite the fact that people do not want Christian Atheists to exist, they do.  There are more of us than you may think.   There is no school of Christian Atheism or denominational hierarchy.  Christian Chiakulus said he came to the label by himself:

When I first took the label of “Christian atheist” for myself last year, I felt at once liberated and nervous.  Liberated because I finally found a phrase that seemed to encapsulate who I am and what I believe, and nervous because I wasn’t sure how the Progressive Christian community I had been trying to join would react.  Would I be accepted?  Ignored?  Laughed at?  Puzzled over?

A part of my uncertainty had to do with the fact that I had come to this label on my own, not following the lead of any theologian or clergy before me.  While I eventually did learn of people like Thomas Alter, William Hamilton, and Gretta Vosper, their writings had no influence over my initial “conversion,” if you will.


The United Church of Canada is tone deaf to what people really think and has circled its wagons around beliefs and theology.   Christian writes:

At the end of the day, their concerns are over language and belief, which are really just methods of control.  Vosper dislikes using the term “God” because she feels that for some people it may act as a barrier between themselves and the type of universal love God actually stands for.  The Conference is ultimately missing the forest for the trees.

To illustrate, a commenter on one of my Facebook posts wrote:

As I get older, I understand less and less about the need for religions/churches to adhere to labeling. "I am a Christian, does that make me good? I am a Muslim, does that make me bad?" If I have to define myself, I guess it would be a seeker. Seeking what? Peace and calm for myself and helping humankind in any way I can. Where can I go to learn this - Christianity, Islam, Native American beliefs, Buddhism, Dr. Seuss, Monet, Bach, Pink Floyd, Atheism, and so much more.  I think if you really need to label, go to Office Depot, they have one on sale for $24.99.

Yes, that would be me. 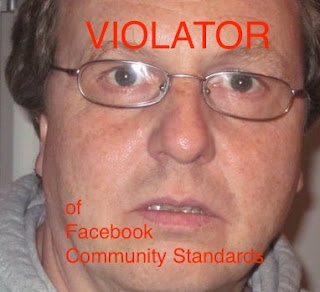 Oh what has he done?! Gasp!

He posted this piece on the atheist from Canada, Gretta Vosper.

She's a violator of community standards, too. 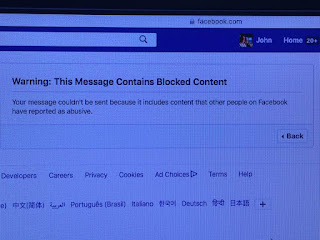 In my inbox of love notes from Facebook, it was because of the above post.    I guess I abused Canada.

Tell your friends that Shuck and Jive is back and in violation!

Deja Vu All Over Again

I served my first congregation as a minister from 1992 to 2000 in upstate New York.   The 90s were intense regarding debates and disciplinary actions against LGBT clergy.  It was in 1996 that our Book of Order had official discrimination written into it.

I was new in the ministry.  On more than one occasion I would give my annual "Sex" sermon then promptly go on vacation.   It was at my second church that I started to be more forthcoming about my views.   It was about 15 years ago, I guess, that I stated from the pulpit that I was in complete solidarity with LGBTQ clergy and with those denied ordination or stripped of ordination.

During Sunday's sermon, I declared my stance with Gretta Vosper that I, too, am an "atheist" minister.   I put "atheist" in quotes, because I am probably more of a "non-theist" or "post-theist" perhaps even a "pantheist" or what not, but the term "atheist" is where the fire rages.

If you asked me what the precise differences are between a non-theist, post-theist, or atheist, I'm not sure I could satisfy the question.   I just know that people get squeamish when they hear the word atheist.  They get nervous.  They put clergy on church trials even if they really have a similar philosophy.

What is an atheist?  As I mentioned in the sermon,


You know what an atheist is? An atheist is 28-year-old law student, Nazimuddin Samad. He was hacked to death with a machete in Bangladesh in April.

He was killed for being an atheist, not a non-theist or a post-theist.

It seems pretty obvious where I need to take a side, doesn't it?

That is why Gretta (also probably a non-theist or post-theist) has declared herself an atheist in solidarity with atheists.  She has done so since 2013.    (Her theological journey resonates with many.   It would make for a good group study).

Deja vu.  I felt the same thing Sunday that I felt 15 years ago.   The same fluttering in the stomach.  The same feeling of warmth in my cheeks.  The same concern and the same hope that my congregation would understand.

I, too, am an atheist minister.

I stood (and still stand) with my queer colleagues because I felt it was the right thing to do.

I stand with my Clergy Project colleagues (some out, some not, some in the church, some not) because I feel it is the right thing to do.

From my vantage point, it sure feels similar.

The pushback sounds the same:

P.S.
Facebook won't allow my blog to be posted on its site.  When I try, I receive the following message:

The Toronto Conference of the United Church of Canada submitted a 39 page report concluding that Rev. Gretta Vosper is "unsuitable" for ministry. The last few pages of the report include a dissenting report from a minority of the committee.  The Global News reported on the decision with the title:


Here is a bit more in-depth piece in The Toronto Star.

Earlier this year, Gretta issued her own statement in defense of her theological growth.   I think I am going to use these two documents in a class entitled, "Whither Christianity?"

For what it is worth, I am an atheist as well.  My beliefs vary little from Gretta's.  In fact, there are many ministers in a similar position.  So what now, witch hunts?  Thanks, Canada.

I thought you were supposed to be more enlightened up there?

It is a sad day for Gretta, West Hill United Church, the United Church of Canada, and church in general.   Yet, this is what it takes to move ahead.

We appreciate you, Gretta, and West Hill United Church.

For the back story, here are some of my posts on the topic.

Gretta Vosper: Can't We Talk About It?