KBOO has released a statement about the death threats to the organizers of the Good in the Hood event this weekend.   I was happy to work on this statement with others.   We hope that the multicultural celebration will get a great turnout and show that love not hate is our guiding ethic.

I would certainly be there this weekend, but Lovely is taking me on a cruise as summer vacation begins for her on Friday.   Anyway, here is the statement from KBOO.


KBOO Takes Stand for Love
PORTLAND, OR ­­­-The KBOO Foundation Board and its staff denounces violence and threats of violence in the Portland metro and reaffirms its commitment to resist hate with love. In response to:
KBOO reaffirms its commitment to resist hate with love, ignorance with understanding, fear with courage, and despair with hope.
For nearly 50 years, KBOO Community Radio has devoted its broadcast frequencies, and more recently its web presence, to the diverse voices of our community. We must step up to be even more assertive in resisting oppression and our KBOO community is committed to respond to hate by understanding its systemic structure and taking courageous action.
In addition to broadcasting dynamic programming from diverse sources to engage Portland and the world with radical love, and supporting conversation about oppression within our own community, KBOO has developed a strategic vision for 2017-2020 “to deepen its internal and external connections to build "The Beloved Community."
The KBOO Foundation Board and its staff encourage the community’s organizations, businesses, schools, religious institutions, police forces, media outlets, and government offices to join us to consciously and actively reduce systemic oppression within their organizations. KBOO also encourages all individuals to attend the....
25TH ANNUAL GOOD IN THE HOOD
MULTICULTURAL MUSIC, ARTS & FOOD FESTIVAL
June 23 - 25, 2017
LIllis Albina Park (North Flint Street & Russell Street, Portland, OR 97227)
KBOO invites everyone in its listening area to partner with us and build the Beloved Community.
KBOO broadcasts at
90.7 fm in Portland
104.3 fm in Corvallis
91.9 fm in Hood River
and worldwide at www.KBOO.FM
*************************

My Greeting at the Embrace Festival 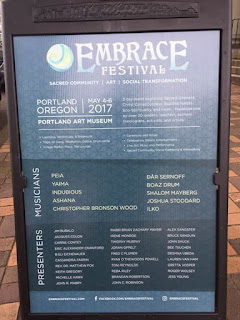 I thought I would share the text of the presentation I gave at the Embrace Festival that took place May 4-6 in Portland.  I was on the panel that opened the event.

My name is John Shuck. You can remember my name by thinking of Oh Shucks, or shucking corn or shucking oysters, or shuck and jive. That is the name of a blog I wrote regularly for awhile, since 2006 and now sporadically. Shuck and Jive.

I have been a Presbyterian minister for almost 25 years.

I currently serve a congregation in the Portland Metro called Southminster Presbyterian Church. It is in Beaverton. It is one of the sponsors of this event. It is my fourth congregation.

I record and produce the program at a community radio station here in Portland, 90.7 KBOO. I volunteer there and engineer and host Democracy Now on Mondays and Thursdays and I currently serve on the board of KBOO. I want to talk about this station a little bit because this radio work is my avocation, my hobby, my passion. My wife says I have two fulltime jobs, my church job and my radio work. Only one of them pays.

KBOO has been in existence for nearly 50 years in Portland. It is one of the early community stations. It provides a variety of programming and at the center of it are its volunteers. I want to share with you KBOO’s vision statement:


This community radio station is in effect a sacred community that participates in social transformation.

Is it perfect? Ha! Of course not, it is filled with humans. Of course, we have conflicts and hassles and budgets and everything else. But it is a community. A community that has heart.

Here is my point. We need communities with heart. I will speak for myself. I need such a community. I need it because I need to be reminded, prodded, and challenged to speak from heart, live from the heart, and be courageous. Courage and heart to speak truth.

We live in a country that lives by lying. In fact, lying, falsehoods, dissembling, has become so popular that our leaders don’t even fake it. None of our institutions from churches, to government, to corporations, to media, to education are speaking primarily from the heart, speaking the truth with courage.

I am going to speak about three people very quickly who I admire as people of courage and heart. Two of them are here and will speak at this festival.

Matthew Fox is a truth-teller. He told the truth that theological doctrines such as original sin and many others were not true and thus harmful. He wrote a book called Original Blessing. You will hear his story, but in short, he was booted from the Catholic church because he wouldn’t shut up about sharing what he thought was true even as it cost him his ordination. It was no small thing. He continues to tell the truth about our peril and our possibility. You are fortunate to be able to hear Matthew this weekend.

The second person in my trinity is Gretta Vosper. She is also going to be speaking today. She told the truth of what she thought about theological matters including concepts of God and has been viewed as unsuitable by her denomination, the United Church of Canada. I will let her tell her story, but what I found courageous and heart-full about Gretta is that she followed her heart in working with her congregation because she respected them enough to talk about what is life-giving and real. She said honestly what other clergy have for whatever reasons been unable or unwilling to say. You are fortunate to be able to hear Gretta this weekend.

The third person is not here this weekend. I think he will be remembered as one of the most important theologians in the 21st century, even as he did most of his scholarly work in the 20th. His name is David Ray Griffin. That’s right, David Ray Griffin the “conspiracy theorist.” Did you now that the label ‘conspiracy theorist’ was invented by the CIA in the 1960s to discredit critical thinking of official government narratives? Just say “conspiracy theory” often enough and no one will ever have the courage to examine the evidence for themselves.

David Ray Griffin became the first scholarly voice of the 9/11 truth movement, the movement to challenge the official government conspiracy theory. He has written perhaps 10-12 books on the topic, one published by my own denominational publishing house. Those who were responsible for publishing it lost their jobs. I am not saying anything more about 9/11 except as it relates to courage.

Last week the American Institute of Architects had their annual meeting. Architects and Engineers for 9/11 Truth made a resolution that there is sufficient evidence to open a new investigation into 9/11 because world trade center 7 that was not hit by a plane and that collapsed at near freefall speed into its own footprint later in the afternoon on 9/11 could not have collapsed by fire. The best scientific hypothesis is controlled demolition.

The AIA voted against the resolution just within the last couple of days. Only 4% voted in favor. Why? The Official statement was that WTC 7’s collapse “has been investigated thoroughly by competent authorities with reasonable conclusions.”

Members of Architects and Engineers for 911 truth interviewed about two dozen delegates who had voted no. They discovered this:


The vast majority of these delegates indicated no disagreement with the argument that WTC 7 did not collapse from fire. In fact, nearly half of them agreed that it was likely — if not completely evident — that WTC 7 was brought down in a controlled demolition.

Nonetheless, most of them voted “no” because, as they put it, this was an issue the AIA should not take on. “It’s not our responsibility as architects,” some said. Others felt it was time to move on. One of those who agreed that WTC 7 was demolished said he thought it would have little impact if the AIA took a stand on the issue. Perhaps most unsettling, though, were the few architects who said they simply didn’t care."

Sacred Communities and Social Transformation cannot be a marketing ploy. Regardless of what you think about 9/11, we are in deep trouble. We are facing serious crises to our planet and we have people in positions of power doing horrible things. They think they will get away with it because they know that like those architects who knew better but kept silent, most people won’t care.

I don’t care what your religion is or how you celebrate and lament and what philosophy guides you, but I do care about being in a community that supports truth-telling, and encourages it.

I hope you have one or find one.