Calling Out Portland on Its Racism

The Oregonian printed my letter to the editor.


I like Portland. I like it enough to call it out on its racism. Redemption is possible.

Portland, I have heard, is the place where young people go to retire. Unless they are black. The black young people end up being targeted and profiled by police. It is no surprise but a preventable tragedy that Quanice Hayes was killed by Portland police officer Andrew Hearst.

I spoke to Quanice's mother. I read the grand jury transcript. I am not satisfied. Regardless of the justifications offered by the police, the outcome is clear: A kneeling, unarmed 17 year-old child was killed by a bullet to the head and two to the chest. Whatever this child might have done that night, and however scared the officer might have been of him, there is no justification for this. While the police may have thought Quanice was a threat, it is more likely that racism got the better of the officer and he panicked.

That is no surprise. Portland has a long, violent history of racism. If Portland is going to change outcomes and rid itself of the cancer of racism, concrete actions need to be taken.

First, there needs to be a federal investigation into this case. Second, we need a special prosecutor, not a grand jury, when police use fatal force. Third, we need to end profiling. Fourth, police need body cameras.

Portland can do better. We are in this together.

A few days after I recorded the interview on Progressive Spirit with Venus Hayes, the mother of Quanice Hayes, and Teressa Raiford of Don't Shoot Portland, the grand jury decided not to indict Portland police officer, Andrew Hearst.    That decision by the grand jury was expected and wrong.

When I say the decision was wrong, that does not necessarily mean Officer Hearst was guilty.   It means that he should have faced trial.   Perhaps the outcome might have been the same and he would have been found not guilty of wrongdoing.    But the trial would have allowed it to be open to the public and to allow for cross-examination of witnesses.   It would have also have allowed the family and friends of the victim talk about the character of Quanice Hayes and see him as a human being whose life mattered.

The 500 page grand jury transcript was released on March 27th.  It is interesting reading.

Officer Hearst admitted that he did not see that Quanice had a gun:


Q.   I understand your testimony, you did not actually see a gun in his hand at the time that you pulled the trigger in your rifle; is that correct?
A. That's correct. I did not see.  (p. 506)

Hearst just believed that Quanice had a gun.   Some have objected to my writing that Quanice was unarmed.   We don't know.  The officer didn't see a gun.  We don't know if Quanice had it on him or not.   It was found on the ground after he was shot.  Why would Quanice reach for a fake gun when an officer with a very real gun is pointing it at him?   If possessing a fake gun is the same as being armed, then I would love to see cops armed with fake guns.

As far as the grand jury testimony was concerned, the questions to witnesses were softball questions without any cross-examination.    All we have is the word of the cops (who obviously will stick up for each other) that the victim didn't have his hands in the right place.  The grand jury seemed to be led to the conclusion that Quanice was some dangerous threat and that the only possible solution was what resulted.

As I said in my letter to the Oregonian:

1) We need a special prosecutor, not a grand jury, for incidents of fatal police shootings.

2) This particular case needs a federal review if for nothing else than to relieve the racial tensions caused by this killing.

3) The police and the entire metro needs to have honest discussions about race, targeting, and profiling.  It needs to end.

The killing of a teenager did not make Portland safer.   I am not saying that Quanice did nothing wrong.  Of course not.  If he did what was alleged, he made some seriously bad choices.   He should face the consequences for that.  He will never get to do so now.  But Quanice Hayes was a human being.   He did not deserve death.   There were many other ways to "disarm" him than shooting him dead.   If not, then the populace is in serious trouble.   If the police cannot control themselves more than that then it is the police who threaten our safety rather than act as our protectors. 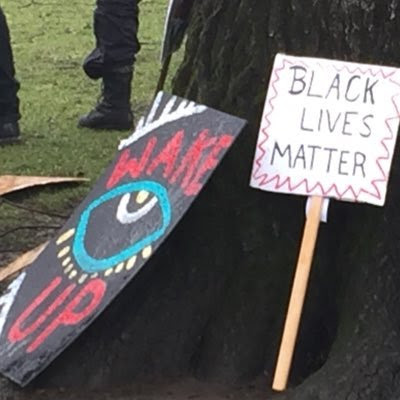 What does this have to do with racism?

If white people don't think Portland is a racist city, then white people should look at facts.   A good place to start is the recent series by the Portland Tribune entitled,

The High Cost of Being Black in Multnomah County.


In Multnomah County, ticket by ticket, arrest by arrest, African-Americans are charged three to 30 times as often as white residents for everything from pedestrian and transit fare violations to drug charges and crimes related to interactions with police.  For black people in Multnomah County, unequal treatment in the criminal justice system is nothing new.  Lauretta Reye Austin, 22, described being hassled by a cop while waiting at a MAX station.

Teressa Raiford, 46, and a leader of Don’t Shoot PDX, said it was only after talking to white girls that she learned police didn’t know all young kids by name — just the black kids.

Here is some truth:


'The relationship between blacks and the justice community has always been defined by the reality that police were assigned to keep the black population under control.'


That is the reality of Portland.  Police do what the white power structure instructs them to do.  Racism is our problem.  We are all in this together.

It is painful for white people to realize that they benefit from institutionalized racism, but it is far more painful for those who suffer from it.  Suck it up, white folks.   Read this important series:

Who are we fooling?  Certainly not people of color.

Let's be part of the solution, not the problem.