Analysis Of A Smear Campaign

Kevin Barrett, on March 16th's False Flag Weekly News, talks about KBOO's decision. The issue is about 9/11. Rather than debate, those who defend the official story censor.

The KBOO staff said the decision to cancel my interview at the last minute with Kevin Barrett was not due to "any type of pressure." KBOO Program Advisory Committee member Herschel Soles sees it differently. He writes: "I heard via a call to the station that there were threats of cutting funding and death threats which suggest there was some pressure." 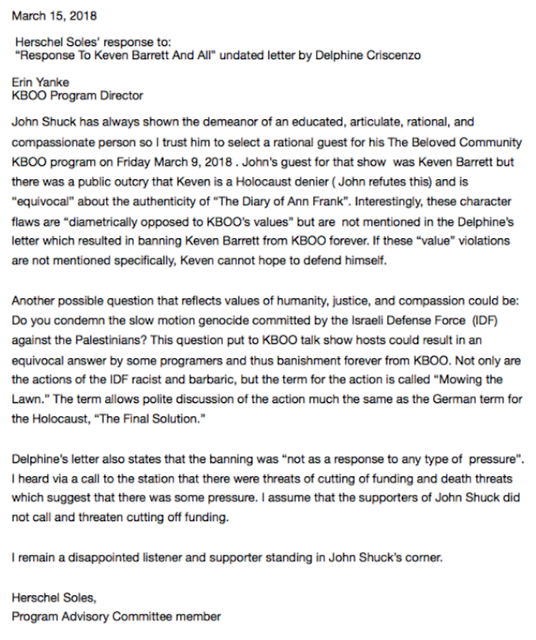 AR Ross, an antifa leader of the smear campaign I wrote about below, has had an article he wrote removed from the Southern Poverty Law Center's website.  The campaign against Barrett isn't Mr. Ross's first go-around regarding name-calling in an attempt to silence journalists and activists who are opposing the military industrial complex. According to Kevin Gastola of Shadowproof:


It lumped anti-war or anti-imperialist journalism in with the work of fascists, who are allegedly part of a massive Russian conspiracy to create a multipolar world where the United States is no longer the greatest superpower.

This is the SPLC's "Explanation and Apology" for Ross's article (Emphasis mine).


On March 9, 2018, we posted an article on our Hatewatch blog entitled “The multipolar spin: how fascists operationalize left-wing resentment.”

Shortly after its publication, we received complaints registered by or on behalf of several journalists mentioned in the article that it falsely described one or another of them as white supremacists, fascists, and/or anti-Semites, and falsely accused them of engaging in a conspiracy with the Putin regime to promote such views. Because neither we nor the article’s author intended to make any such accusations, we took it down while we re-examined its contents.

That re-examination has caused us to conclude that, while the intent of the article, which we thought was clear at the time of publication, was to show only that individuals on the left share some policy views with respect to multipolarism that are also held by the far right and/or appear on far-right media and conferences advocating them, the article did not make that point as clearly as it could or should have.

Accordingly, we have decided not to re-post it. In addition, we extend a sincere apology to those who believe they have been falsely described in it, including Max Blumenthal, Ben Norton, Tim Pool, Rania Khalek, and Brian Becker, and disclaim, as clearly as we can, any intention to suggest that any of them are white supremacists, fascists, and/or anti-Semites, that they hold such views, or that they are engaged in a conspiracy with the Russian government to promote such views or otherwise.

Meanwhile, KBOO's management has released a statement about canceling Kevin Barrett's appearance on my Friday show. When I spoke with them this morning, staff stated that the decision was not due to pressure. Morning news director, Derric Crooks, who was chiefly responsible for the decision, said he conducted his own research and helped draft the statement that said Barrett's "speeches, writing, and other publicly available material are diametrically opposed to KBOO's values." 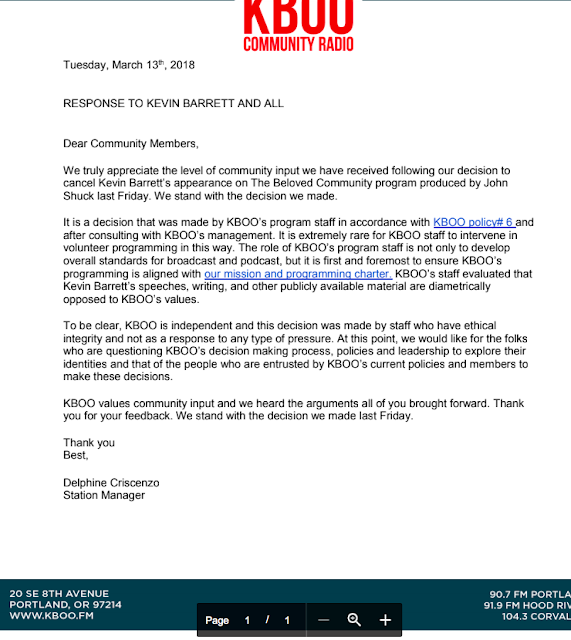 Obviously, I disagree.  Kevin is a well-researched scholar and academic and has sacrificed a great deal to point out some very uncomfortable truths about 9/11, Islamophobia, and Zionism which is exactly what we were going to talk about on my show.  The important stuff. Uncovering uncomfortable truths is a KBOO value.

It has been an interesting series of events.

Dr. Kevin Barrett was not on my monthly KBOO show, Beloved Community, last Friday, March 9th as scheduled. Dr. Barrett is a Muslim and an Arabic scholar. We were going to discuss his thoughts about Islamophobia and what drives it.  Here is that story.

I had planned to have him on my show for some time and it received on-line and on-air promotions.  A couple of days before the show was to air, the Program Director sent me an email that had been sent to her, ""Stop Kevin Barrett from polluting the airwaves with anti-semitism...."

I knew it was a smear campaign when I first saw the trigger words (antisemite, holocaust denier, conspiracy theorist).  I didn't take this email too seriously as I myself have been a target of smear campaigns. I wrote back to the program director that I would take responsibility because Kevin was my guest. I thought that would be it. I even replied to the RCA (Rose City Antifa) email and invited them to call in on the live show.

Then the smear campaign began in earnest. After a day's worth of libelous Twitter attacks, emails and phone calls to KBOO, the staff (for reasons I am not sure as I have yet to speak with them), called me and forbade me from interviewing him. I love the staff and I assume the best of them. My guess is that they panicked.

Kevin offers his take on the bullying by RCA here (9:45) while speaking with Dr. John Andrew Morrow. By the way, Professor Morrow is an Islamic scholar, author and activist with The Covenants Initiative. I will be on a panel with him in Seattle April 28th for an interfaith event. 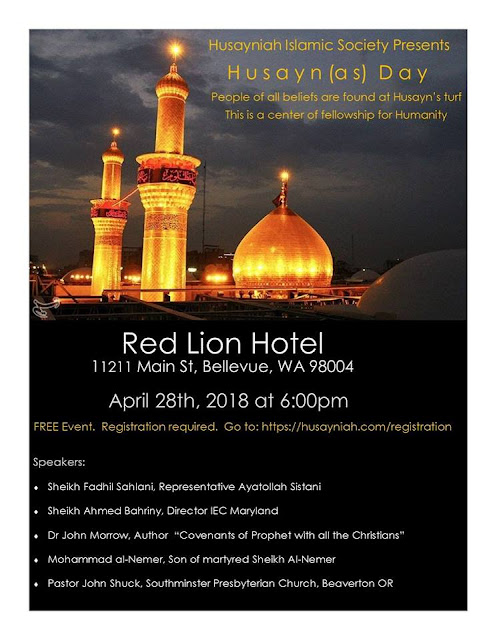 These are the Muslims who are 'peace through justice and truth' Muslims, not the Wahhabists. These covenants are about how to live together, how to coexist, Muslim and Christian. We keep saying, "Where are the peaceful Muslims?" Here they are. Do we really want to ban them from the airwaves?

My interest in having Kevin as a guest arose because I met him at a conference that was put on by Roots of Conflict. They invited me to moderate the discussion at Portland State on February 3rd  (Co-Sponsored by KBOO), because of my interfaith work with the masjid across from my church. We  have collaborated on the Ramadan Tent Project and shared birthday celebrations of prophets Mohammad and Jesus (Peace Be Upon Them).

This was the second conference in which Roots of Conflict had Kevin Barrett as a presenter. Here is a summation of the first. I was nervous about it at first as I knew he was outspoken about 9/11, but I said to myself, "These are the people my friends want me to hear. So I will."

My mind is opening. Islamophobia is real. Kevin has a defensible and interesting theory of how it arose and continues to do damage. Agree with his theory. Don't agree. Or as I quoted Aristotle at the beginning of the conference,

"The mark of an educated mind is to entertain a thought without accepting it."


Anyway, on Friday morning I had to scramble on what to air in the place of my interview with Dr. Barrett. Luckily, I had prepared a special program for my syndicated show, Progressive Spirit, featuring presentations by Dr. Aisha Jumaan and Mohammad Al-Nimr that were presented at the Roots of Conflict event at Portland State. KBOO was going to air it another time, but I decided to air it then in place of my live interview with Dr. Barrett.

[BTW, please listen to this and share widely. Look up Dr. Aisha Jumaan about the Yemen Catastrophe that would not happen without U.S. support. And look up the story of Saudi Cleric, Nimr Al-Nimr who was executed by the Saudis for speaking out about their human rights abuses.]


The irony is that Dr. Barrett also spoke at that event! I asked KBOO to co-sponsor it which it did.

Here is another irony. Sunday, I preached on Nicodemus. Nicodemus only appears in the Gospel of John and he appears three times.  Nicodemus is a member of the Pharisees, the religious establishment.  He is interested in Jesus and speaks with him about spiritual matters (chapter 3). Nicodemus also buys 75 pounds of spices to give Jesus a proper burial (chapter 19). In chapter 7, when Jesus is being maligned by religious leaders and their cops, Nicodemus comes to the defense of Jesus amidst a smear campaign.


Then the temple police went back to the chief priests and Pharisees, who asked them, ‘Why did you not arrest him?’

The police answered, ‘Never has anyone spoken like this!’

Then the Pharisees replied, ‘Surely you have not been deceived too, have you? Has any one of the authorities or of the Pharisees believed in him? But this crowd, which does not know the law—they are accursed.’

Nicodemus, who had gone to Jesus before, and who was one of them, asked, ‘Our law does not judge people without first giving them a hearing to find out what they are doing, does it?’

They replied, ‘Surely you are not also from Galilee, are you? Search and you will see that no prophet is to arise from Galilee.’

Smear campaigns are at least as old as the Bible and still as deadly. Before condemning him, maybe we should follow the wisdom of Nicodemus and give Dr. Kevin Barrett a hearing. Those who don't like what he says can share their views too.

KBOO station management should hear from you about this.  As I wrote in my email to them:


It is important to me that Kevin not be considered an enemy (nor me for that matter) because we explore controversial and often taboo topics.  I want to be able to do that at KBOO and not freak you all out. I don't want RCA members to be an enemy either, but I do want to call out this particular campaign tactic as unhealthy to a beloved community.

So I am eating my eggs at Shari's restaurant and using their wifi.  I am checking to see if the link from this post to my blog works, and I get this:

No I don't have an ssl certificate because I don't sell anything here.  My church website www.southmin.org doesn't have the ssl thingy either.  But you can eat your eggs at Shari's and enjoy perusing my church website. 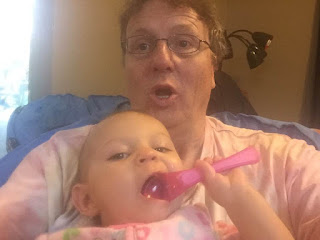