Why I Am Voting Yes On Measure 97

UPDATE:  Here are some places and times to knock on doors or make some calls.   It is actually fun! Go here to find out how to help.

Portland office:  917 Lloyd Center anytime between 10AM and 9PM from now until the election!


If you haven't yet sent in your ballot, you may be undecided about measure 97. I am hoping to encourage you to fill in the oval "Yes."

We have been in Oregon nearly two years.  My wife and I moved from Tennessee.  Full disclosure--she is a music teacher in the Beaverton school district.   It was pretty amazing that she found a job.  We really couldn't believe it when we heard that music programs and teachers had been cut for budgeting reasons many years ago.    Oregonians do know that music isn't just singing campfire songs for fun, right?  When schools lack education in music and the arts, our children are crippled intellectually.   No music?  Seriously?  Tennessee is no shining star but it has music.     Oregon's philosophy seems to be,  "if you don't have money in the budget, make the kids pay" by slashing music, art, physical education, and vocational education.

If you still need to save money, keep the kids home.   We were appalled to discover that Oregon students will have completed a full year less than their Washington state counterparts by the time they graduate.   That is, if they graduate.   Oregon ranks dead last in the graduation rate.  In 2013 only 68.7% of Oregon students graduated high school, lower than any other state.   When they do attend they are packed in to crowded classrooms because even as enrollment has increased, Oregon has 2,000 less teachers now then in 2008 and it has the some of the nation's largest class sizes.

This is a problem.  And it will get worse unless we change. 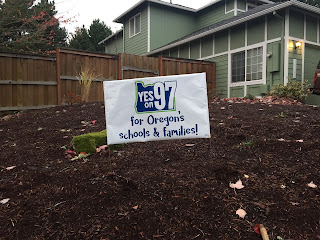 In addition to having one of poorest funded education systems in the nation, Oregon also has the lowest corporate tax rate.   That means large and out of state corporations take a lot of money out of Oregon but give little in return in terms of taxes.

You have heard and seen the ads funded by these corporations.   They are spending millions on misinformation and scare tactics such as these three statements in bold:

1)  Costs will be passed on to consumers.  No.  Prices are set nationally.  If Comcast could charge you more now, it would.  It doesn't because of competition.  The corporations will pay this tax, not the consumers.

2)  Businesses will move out of state.  That wouldn't be very smart.  They will simply lose on sales.  Many of these huge corporations are out of state already.  This tax is on sales made in Oregon.   Corporations have a sweet deal in Oregon.  It is time for them to pay their fair share.

3)  The legislature will spend the money on other things.  It says clearly in the measure itself, that this will be spent on education, healthcare and senior services:

It will be the law.  Black and white.  We will all be watching that the state complies with the voters' mandate.

Objections to 97 are red herrings and actually hysteria.   Large and out of state corporations don't want to pay it.   They have enjoyed this free ride.  They will do everything they can to try to convince you that up is down and good is bad.

Measure 97 will generate three billion dollars for our children, our seniors, and for the sick, the most vulnerable in our society.  This will help make Oregon sustainable.  This is an issue of social justice.  That is why I along with many other clergy have endorsed measure 97.

I even preached a sermon about it.

Here is an interview I had with Otto Schell, legislative director of the Oregon Parent Teachers Association on KBOO.  This is a great interview to send to friends and family and post on social media.