I Want To Be An Ancestor--A Sermon

I Want to be An Ancestor
John Shuck

The General Assembly of the Presbyterian Church (U.S.A.) will be meeting in Minneapolis in a few months. Once every two years Presbyterians gather to celebrate, lament, and make decisions in a revelry of Roberts Rules of Order.

Among the many issues that divide us, the General Assembly will consider a report from the Special Committee to Prepare a Comprehensive Study Focused on Israel/Palestine. This committee was formed in 2008. It has not yet finished its report but has made some recommendations. According to the Presbyterian News Service:

The report affirms historic PC(USA) positions — an immediate cessation of violence by both sides, an immediate freeze on the construction and expansion of Israeli settlements on occupied territory, the relocation of Israel’s “separation barrier” to the internationally recognized 1967 border, a shared status for Jerusalem, equal rights for Palestinian citizens of Israel, and immediate resumption of negotiations toward a two-state solution.

The report also calls on the U.S. government to end its acquiescence in the Israeli occupation of Palestinian lands, and to

“employ the strategic use of influence and the withholding of financial and military aid in order to enforce Israel’s compliance with international law and peacemaking efforts.”

“adoption of this poisonous document by the Presbyterian Church will be nothing short of a declaration of war on Israel and her supporters.”

The statement from the Wiesenthal Center got results. This past week during meetings in Louisville, Presbyterian leaders were flooded with over 2,700 emails protesting this committee and its report, even as the report has yet to be completed.

We are warming up for another thrilling General Assembly.

Meanwhile Jesus sits on the hill weeping over Jerusalem, like a mother hen who

“longs to gather her brood under her wings.”

Sadly, as usual, no one is willing to be gathered.

Today we read the story of Abraham who is promised descendants as many as the stars in the sky. YHWH tells him:

‘To your descendants I give this land, from the river of Egypt to the great river, the river Euphrates the land of the Kenites, the Kenizzites, the Kadmonites, the Hittites, the Perizzites, the Rephaim, the Amorites, the Canaanites, the Girgashites, and the Jebusites.’

Of course the Girgashites and the Kadmonites and today, the Palestinians, might raise an objection. Hey, how do we fit into this great plan?

In the Gospel of John, the following words are put on the lips of Jesus:

“I am the way, the truth, and the life. No one comes to the Father but by me.”

Of course, the Hindus, pagans, the doubters and the descendants of Abraham might raise an objection. Hey, how do we fit into this great plan?

In the Qur’an we read:

"But when the forbidden months are past, then fight and slay the Pagans wherever ye find them, an seize them, beleaguer them, and lie in wait for them in every stratagem (of war); but if they repent, and establish regular prayers and practice regular charity, then open the way for them: for Allah is Oft-forgiving, Most Merciful."

Of course the Christians, and the pagans and the Jews might raise an objection. Hey how do we fit into this great plan?

Samir Selmanovic in his book, It’s Really All About God: Reflections of a Muslim Atheist Jewish Christian, writes: 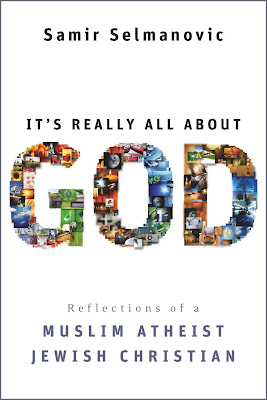 “Whenever a creature claims to have an exclusive grasp of God, someone gets hurt.” P. 141.

Samir Selmanovic is a minister in New York City. His book is a plea for religions to find a way to be good for all people. Rather than to see ourselves as a blessing to others (as long as "they" become like "us"), our evolution will require us to recognize that others are a blessing as they are.

The only God worth worshiping is a God that is outside of our religious boundaries. He writes:

‘Each of our three Abrahamic religions makes two claims. First is the claim we agree on: “God is One.” Second is the claim we deny we are making: “We are in charge of God....” Quietly, over the ages, our religions have colonized the name of God and become God management systems.” P. 91.

There is a way to come to terms with these exclusive texts. In fact, there are many ways. Throughout history we have changed the way we read texts. We do it because we read it with “the other” and the other becomes a subject engaged with us rather than an object..

Selmanovic, speaking of the exclusive texts I mentioned from all three monotheistic religions, writes:

That may be the central theme of his book.

The "other" is really us.

Only with that recognition will our religions be a blessing.

There have been harsh and I think deserved criticisms of religion surfacing these days. The title alone of Christopher Hitchens' book, God is Not Great: How Religion Poisons Everything makes the point rather clearly.

I think Hitchens is absolutely partially right. When he is right, he is right absolutely. It is certainly not difficult to find examples that prove Hitchens’ thesis.

But he is not totally right. It is authors like the gracious Selmanovic who have allowed doubt, love, and life to shape his religion into something life affirming for everyone.

In regards to being right, Selmanovic includes this poem by Israeli poet Yehuda Amichai entitled: “The Place Where We Are Right:”

From the place where we are right
Flowers will never grow
in the spring.

The place where we are right
Is hard and trampled
Like a yard.

But doubts and loves
Dig up the world
Like a mole, a plow,

And a whisper will be heard in the place
Where the ruined
House once stood.

I titled the sermon, “I Want to be An Ancestor.” I heard this statement from Nancy Ellen Abrams, author of the book, The View from The Center of the Universe. It was a phrase that jolted me a bit.

The promise of many descendants is not automatic. She was not referring to her own biological offspring. She was talking about the survival of the human race itself.


Implied in this desire is that the actions we make today may influence whether or not we do have descendants. Certainly not everything is up to human agency. Even with our best intentions we may make decisions that end up doing more harm than good.

Yet the statement, “I want to be an ancestor” affirms that we do have some choice. Our future is not fated. It is not predestined. We are not programmed for destruction or for glory. We have a choice to participate consciously in life.

Perhaps that is really what is being asked of us: to be conscious of the moment in which we live and to have an intent for the life and well-being of future generations.

According to the Great Binding Law, the Constitution of the Iroquois Nations, we find that crucial ethic:

“In our every deliberation we must consider the impact of our decisions on the next seven generations.”

“In our every deliberation we must consider the impact of our decisions on the next seven generations.”

Just to be conscious of it might be enough to tip us toward life rather than death.

We can read the story of Abraham in a narrow, provincial manner as the promise of real estate by Bronze Age deity to a particular tribe. In one sense that is exactly what it was. But the passage can have a more than that meaning. We can read it as promise of life and the inspiration to creativity for all people on this globe regardless of religion, or nationality, or ethnicity.

We can read the story of Jesus who wishes to gather his brood under his wing as another story that promotes Christian exclusivism. Everybody will be gathered up by our Jesus. Or we can read it as a symbol of compassion and security and the inspiration to make justice, unity, and peace for all people of Earth regardless of our divisions.

We can prove Christopher Hitchens right again and again that religion poisons everything, or we can discover the wisdom, beauty, and poetry from of all of our varied and rich religious traditions and use them to serve life,
to serve all of life,
and to serve life seven generations to come.
Posted by John Shuck at 2/28/2010 10:02:00 AM