Architects and Engineers for 9/11 Truth

Tonight at 7 pm we will watch the film, 9/11: Explosive Evidence Experts Speak Out.   I have determined that AE911Truth is doing solid work and does not chase after "conspiracy theories."  They focus on the science of the destruction of the three skyscrapers on 9/11.   They don't speculate on other issues surrounding that day but instead they present the evidence and the best scientific descriptions of that evidence.   They do seek one thing:  an independent investigation of 9/11.


Our mission is to research, compile, and disseminate scientific evidence relative to the destruction of the three World Trade Center skyscrapers, calling for a truly open and independent investigation and supporting others in the pursuit of justice. 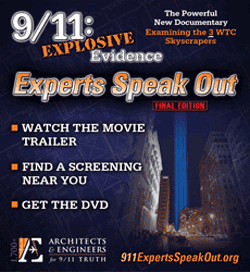 Beyond Misinformation: What Science Says About The Destruction of World Trace Center Buildings 1, 2 and 7 is a helpful book that accompanies the film.  Everyone who attends tonight will get a photocopy of the pdf.

Last week I offered my own personal journey through 9/11 and tonight I let the film speak for itself and invite whatever discussion arises.   If you think enough doubt is raised with the film to at least question the official narrative of what happened on 9/11, you will be interested in signing this petition from the 911Truth Action Project either on-line or I will have paper petitions available tonight as well.  It reads:


I hereby petition for, and demand, an independent, comprehensive investigation, satisfying all standards specified by the 9/11 Truth Action Project, including subpoena power, testimony under oath, and study of all relevant evidence, leading to transparency and accountability for the crimes of September 11, 2001 and justice for its victims. My name, city, and state will be publicly presented to Congress at www.911TAP.org. My other information will remain private and not released to third parties.

I have signed the above statement. If you are an architect or engineer, the AE911Truth welcomes your support.