Religion For Life in Kingsport-Times News

Thanks to the Kingsport Times-News and to Wes Bunch for this article on the front page of today's Times-News, "Religion For Life": Show Strikes Chord with WETS-FM Listeners.  Today's Johnson City Press also included the article.


Nearly nine months ago, the Rev. John Shuck hosted the first episode of his show, “Religion for Life,” on the airwaves of public radio station WETS-FM.

In the 30 or so episodes he has recorded since then, Shuck has interviewed a variety of guests on topics ranging from how science and religion can coexist to one-onone interviews with local leaders of various faiths.

Shuck, who has served for the past seven years as pastor at First Presbyterian Church of Elizabethton, said the show — whose subtitle is the intersection of religion, social justice and public life — is not designed to act as a sermon, but to educate listeners about religion itself and all that it entails.

“The idea is to look at the influence of religion, which is a huge topic, in terms of how it affects the way we think, our culture, our religious practices, our politics — all kinds of things that fall under the heading of religion,” Shuck said. “So we look at religion from a variety of perspectives, both positive and negatively.

“A big part of it is to introduce some of the voices in our community that we may not know about from different religious perspectives, whether it’s Muslim or Jewish, Buddhist or Hindu.”

Shuck added: “My show’s goal is not really to promote religion, or one religion in particular even though I happen to be a Christian minister. I really want to have voices critical of religion as well.”

Episodes of “Religion for Life” — which air on Thursday evenings and Sunday afternoons on WETS-FM 89.5 in the Tri-Cities and on WEHC-FM 90.7 in Southwest Virginia — have featured interviews with the Rev. Jacqueline Luck of the Holston Valley Universalist Unitarian Church and Dr. Jay Mehta of Kingsport’s Regional Indian-American Community Center. Shuck said he hopes to one day host Muslim Community of Northeast Tennessee Director Taneen Aziz.

While exploring different faiths and beliefs is an important part of the 30-minute show, Shuck said he also uses it as a platform to have discussion topics, or groups, that are tangentially related to religion.

“There are faith groups that are interested in a lot of different types of things from a social justice aspect, or environmental or economic aspect, that are interesting to talk to as well,” Shuck said.

One of those guests was Anthony Flaccavento, the Democratic candidate for Virginia’s 9th Congressional District, who discussed the role of religion in creating sustainable economies. Others have included controversial religious figures like Bishop John Shelby Spong, or authors like Sarah Sentilles, and even doctors and scientists.

The key to conducting a good interview, Shuck said, is to find a subject with an interesting take on a topic that many people can relate to, whether they realize it or not.

One example of a compelling interview, Shuck said, was his discussion with “Breaking Up With God” author Sentilles. 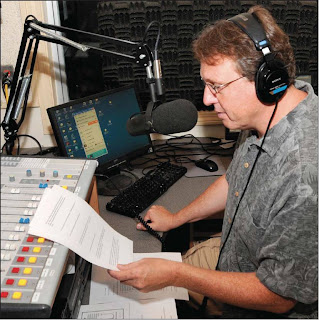 “That was more of a theological book and about her struggle with religion,” Shuck said. “She was going to become an Episcopal priest, and through the course of it she said ‘I don’t really believe in God the way it was presented to me.’

“The reason she was interesting is she was very engaging as an interviewee, but she also talks about a topic that I think is really on people’s minds in terms of what do we mean when we talk about God today and looking at faith. The most interesting guests are the ones that touch on a topic that many people feel who might not have voiced them yet.”

No matter what the topic of discussion is, Shuck said his goal is to provide his guest with a forum to share what religion means to them.

“It isn’t an adversarial show, and I don’t come at it that way,” Shuck said. “The model that I look to is someone like Bill Moyers who talks about religion and public life in a lot of positive ways. I really admire him. Also on NPR, Terry Gross and ‘Fresh Air,’ I like her style of things. It isn’t a talk show where they get up there and yell at each other. It’s more of a conversation, and I really want to hear what these folks are saying — what their view is.”

Shuck said the fact that the show is recorded and produced by WETS is one of the main reasons he is able to touch in depth on such a wide array of topics.

“They’re really great at WETS. They don’t tell me anything about content,” Shuck said. “I just go with who is of interest to me and go with it from that. The goal overall was to make it educational instead of a sermon. But it gives you some real freedom to talk about different things. It’s only a half hour, but even at that level it’s more than the three- or fiveminute clips you get from the news.”

WETS Program Director Wayne Winkler said locally produced content like “Religion for Life” and “Your Weekly Constitutional,” which is hosted by Appalachian School of Law professor Stewart Harris, are not only a natural outgrowth of a two-year-old format change to news programming, but also help carry out the station’s goal of providing quality radio to its listeners.

“I believe that local content is essential, especially in a public radio station,” Winkler said. “I believe it would be a misuse of our license if we didn’t try to do something that reflected our local community , some of the ideas, or a local take on national issues. We do have a great number of people here who do have expertise and knowledge in a wide variety of topics, so we want to capitalize on that whenever we can.”

Winkler, who produces the shows, said they both have been well-received in their relatively short histories, with listeners providing lots of positive feedback and the longer-running “Constitutional” even finding its way to new markets.

“(‘Religion for Life’ is) a great program and is one that brings us lots of attention, and it’s something that people talk about,” Winkler said. “So we’re really pleased with both of our locally produced programs because they are of a quality that people would expect from a radio station in a much larger market.”

“Those two programs probably get more comments than even the NPR programs too in terms of listener feedback,” Winkler continued. “It tells you that people are listening, and we are getting a surprising level of feedback on those two programs.”

While the sometimes controversial nature of religious topics has drawn some detractors, Shuck said he too has received largely positive feedback from his listeners and congregations.

“I get emails and calls to the church, several a week, from people who listen to it,” Shuck said. “Some people don’t like it. I’ve had a couple of negative ones.... But that’s okay, as long as they’re listening. But then one day we had a gentleman come into the radio station and say ‘Here’s $100. I really like that show “Religion for Life.”’ And he wouldn’t give his name or anything.

“So I think what the show does is it gives a voice to people who have these ideas but haven’t really heard it said in a local setting.” 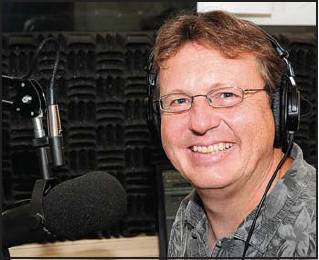