For the past several years we have had a study group at the church.  We meet on Thursdays from 10:30 until noon.  The group is called "Thursdays With Jesus" even as Jesus has yet to make an appearance in any non-metaphorical manner.  I keep hope alive.

We have been watching and discussing a great Teaching Courses series by Bart Ehrman, called Lost Christianities:  Christian Scriptures and the Battles Over Authentication.   We are down to the last four lectures.  We watch two per week.  It has been well-received.

We are going to read Robin Meyers, The Underground Church:  Reclaiming the Subversive Way of Jesus.   Here is the blurb: 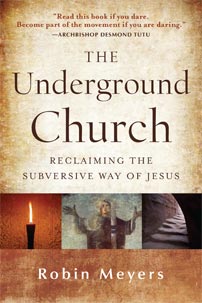 The Underground Church proposes that the faithful recapture the spirit of the early church with its emphasis on what Christians do rather than what they believe. Prominent progressive writer, speaker, and minister Robin Meyers proposes that the best way to recapture the spirit of the early Christian church is to recognize that Jesus-following was and must be again subversive in the best sense of the word because the gospel taken seriously turns the world upside down.


Robin Meyers is a good guy.  He granted me an interview for Religion For Life.   He will be coming up.  I have a bunch of interviews recorded.  I need to get into the WETS studio and produce them.   Good programs are on tap including:

Religion For Life is a lot of fun.   I am getting a lot of good response since that nice article in the Kingsport Times and Johnson City Press.

Feel free to join us for Thursdays With Jesus at your favorite underground church in the woods.