For several nights a week I have been sleeping in Zach's bed in Zach's old room.  Over the past couple of weeks I have had some dreams.

I am in a funeral home.  It is an old funeral home in Gray, Tennesssee.  In real life I had been there for another funeral a few weeks ago.   In my dream, Zach is in the coffin.   Suddenly he sits up.   He starts looking around with jerky motions like in those zombie movies.   The funeral director is kind of wild-eyed and wild-haired, like the scientist in Back to the Future.  He is holding Zach and says, "Don't worry.  They do this all the time."

Zach is trying to speak and he looks angry.  He finally says:  "My parents didn't understand my pain."

Then he starts mumbling all kinds of things that don't make any sense.  I realize there is there is nothing there for me and I leave.

In another dream, Zach isn't in it, but I know somehow it is about Zach.  With me is a little girl.  She wants to climb Rapunzel's hair.  But it is more like a hair rope.   The story is really Jack and the Beanstalk.   I tell her it isn't a good idea.  But she starts climbing and I reluctantly climb with her.  I know that if we start this we won't come back because everything is moving up too fast.   Different worlds appear to us.  She enters one and finds herself older, but in the same abusive relationship.   I realize the worlds are the same even as we may be different people in them.

Zach is a baby or maybe one or one and a half.  I am tickling him and saying, "Funny boy, funny boy."  He is laughing that gutteral, "Heh, heh, heh," he used to do.  I feel his body.  His stomach.  The soft skin on his shoulders.  We are happy.  Then I see he needs his diaper changed.   It is filled with tar black poop.   His sister knows where the "Wet Ones" are and I start to clean him up.   I have to clean him up on a white carpet.  It is a big job but I think I finally do it.

I wake up crying. 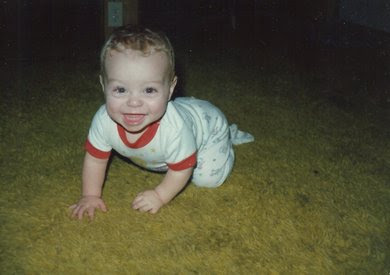