On the Way
John Shuck

“If I do not go to the hell to help the suffering beings there, who else will go? ... if the hells are not empty I will not become a Buddha. Only when all living beings have been saved, will I attain Bodhi.”
--Ksitigarbha Bodhisattva 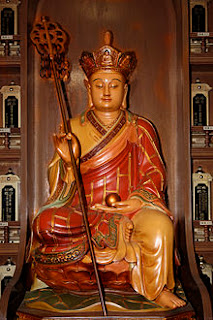 Today we wrap up the summer preaching series on happiness. It has been hard even to say that last sentence. Life has been lived in a fog since the death of Zach. I feel like I am living but not living. I am not exactly sure what the word “surreal” means, but it seems to apply. I am thankful for the mind and body’s natural defenses that only allow this shock of realization at intervals.

It has been jarring to continue this sermon series on happiness at a time when my family and I are going through the most devastating period in our lives. And yet amidst this injustice, the birds are oblivious and inappropriately, keep singing.

In that same inappropriate way, I preach on happiness. Yet oddly enough, it is appropriate.

The word happiness sounds so trite. It is like finally getting to meet the President and all you get are a few sentences and you waste them commenting on the weather. It is like sitting down for dinner and all that is served is candy.

Is it the word, “happiness” that is the problem? Would the word “joy” be better? Could be. Is there something too self-focused about the word happiness? Too much navel gazing? It is like skimming the covers of the tabloids in the supermarket aisle. The celebrities only have first names. Kate and Tom breaking up. Justin and Aniston getting engaged. Miley and Pink jealous of each other’s mohawk. If these celebrities with their looks, wealth, and connections cannot quite seem to corner happiness is there any hope for the rest of us? What is this happiness that we are chasing?

This summer we looked at the work of psychologist Jonathan Haidt, author of The Happiness Hypothesis: Finding Modern Truth in Ancient Wisdom. He seemed to me to make as much sense as any. Happiness is pretty much something we are wired for or not. We can cheat and boost up our biological set point by meditation, possibly medication, and reframing our behaviors and outlook. Increasing the quality and quantity of our relationships can increase happiness. Plus discovering and using our strengths to do meaningful things can add to happiness.

There are other things he writes about that can add to happiness, like surviving adversity and working on those old fashioned ideas called virtues that our great-grandparents knew. Ben Franklin made his own list of 13 virtues. He made a chart and he would evaluate himself at the end of the day as to how well he did exercising his virtues. These virtues included humility, tranquility, silence, chastity, cleanliness, moderation, justice, sincerity, industry, frugality, resolution, order, and temperance. He said he wasn’t perfect by any means. But the discipline, he said, made him a better person. Ben Franklin was a pretty happy guy.

My first congregation was in upstate New York. I remember some of the Mennonite families would use the names of virtues to name their children. I found myself taken aback when I would run into someone named Temperance or Patience. I wonder if it helped. With a name like Patience you don’t want to be caught cutting in front of others in the line at the Wal-Mart.

Earlier this year Columbia University’s Earth Institute published the World Happiness Report. They made their conclusions based on a number of factors including health, job security, political freedom and so forth. They discovered that the happiest nations were Scandinavian countries. Denmark, Finland, Norway, and Netherlands topped the list. Following in order of happiness were Canada, Switzerland, Sweden, New Zealand, Australia, Ireland, and then coming in at eleven was the United States. The authors of the report wrote:


"While basic living standards are essential for happiness, after the baseline has been met happiness varies more with the quality of human relationship than with income...Policy goals should include high employment and high-quality work; a strong community with high levels of trust and respect, which government can influence through inclusive participatory policies; improved physical and mental health; support of family life; and a decent education for all."


I appreciate that Columbia University is making an attempt at uncovering what social, political, and economic factors contribute to well-being or happiness and what we can do as communities of people to increase levels of happiness. They show that happiness or contentment or well-being is important to evaluate and to pursue. Happiness it appears is not so much a state or a goal, but a way or a path.

According to this report great inequality within a nation or community is one thing that serves to decrease the level of happiness of everyone, even those who appear to benefit.

It is an old lesson. If we wish to be happy, we would do well to increase the potential for the happiness of others. If meaningful work, education, good relationships, a comfortable income, good health, personal freedom, and so forth are available to me and make me happy that is good. But if my neighbors are not able to attain those things, my happiness actually decreases. That is only reasonable because that means I am a human being. Human beings cannot truly be happy in the midst of the suffering of others unless they are actively engaged in relieving that suffering. Happiness cannot ever be an individualistic pursuit. We can only be happy to the extent that we bring happiness to others.

That wisdom is at least as ancient as the bodhisattva. The bodhisattva is motivated by compassion to bring Buddhahood or enlightenment to all beings. The image is that the bodhisattva refuses to enter Nirvana, or heaven to use a Christian word, until all beings enter Nirvana. The idea that there would be heaven where the righteous experience bliss while others suffer in hell would be an anathema. Only a sociopath could be happy--if that is what you could call it--in such an existence.

It is impossible truly to be happy and at bliss knowing that others suffer. The bodhisattva devotes his or her existence to bringing others to enlightenment. The point is that this is a never-ending task. The deeper point is that it is in the doing of it, it is in the compassionate work of bringing others to enlightenment that the bodhisattva actually lives happiness. Happiness, or enlightenment, or contentment is not a state or a goal but a way.

Jesus Christ can be understood as a bodhisattva. This is the great hymn from Paul’s letter to the Philippians about the Christ:

I appeal to all of you to think in the same way that the Anointed Jesus did, who
Although he was born in the image of God,
Did not regard “being like God”
As something to use for his own advantage,
But rid himself of such vain pretension
And accepted a servant’s lot.

Since he was born like all human beings
And proved to belong to humankind,
He recognized his true status
And became trustfully obedient all the way to death,
Even to death by crucifixion.

That is why God raised him higher than anyone
And awarded him the title that is above all others,

So that on hearing the name “Jesus,”
Ever knee should bend,
Above the earth, on the earth, and under the earth,
And every tongue declare: “Jesus the Anointed is lord!”
To the majestic honor of God , our great Benefactor.  (Scholars' Version)

Paul, in reciting this hymn, is admonishing his friends to do the same thing, to share the same attitude. Even as Judaism and Christianity on one hand and Hinduism and Buddhism on the other come from geographically different places and from different cultures and developed differing languages and different symbolic expressions, at the deepest levels, their fundamental affirmations are similar.

The literature about the bodhisattvas is wonderful. There are billions of these beings and they appear to us all the time even as we don’t know it. Sometimes it is the cashier at the store. Sometimes it is an animal. They appear to us and do things to awaken us. You can’t just make people enlightened. People have to realize it on their own. The Bodhisattvas have to sort of, well, trick you into it. In those experiences in which you have had an increase in awareness or an aha! moment, a bodhisattva opened that path for you. You can have fun with this. You don’t have to take it literally, but the imagery of the universe filled with bodhisattvas in disguise seeking to make all beings happy and enlightened is a wonderful image. When feeling discouraged knowing that all these beings are on our side is comforting.

Now the thing is…that you are a Bodhisattva as well. You are that for others. Don’t be afraid to take that role. That is the deep wisdom. Now this same thing is in the Christian tradition. The Cosmic Christ is within and among us. As the risen Christ was with the walkers on the Emmaus road and they didn’t realize it until they all broke bread together, so the Christ is with us and is seen in the aha! moments, the breaking of the bread, the unexpected laughter, the act of compassion, the suffering shared. The point again, as Paul writes in Philippians, is that we are to be of the same mind. We are to be Christ for another.

You want to be happy? You are not alone. Billions and billions of bodhisattvas and little christs are conspiring at this very moment to help you.

The clincher is that you are one of them.