An Evening of Jazz with Gilad Atzmon

Southminster will host British Jazz artist and author, Gilad Atzmon, Monday, May 14th at 7:30 p.m. This is from his bio:


Gilad was born in Israel in 1963 and trained at the Rubin Academy of Music, Jerusalem (Composition and Jazz). A multi-instrumentalist he plays saxophones, clarinet and ethnic woodwind instruments. His album Exile was the BBC jazz album of the year in 2003. He was described by John Lewis at the Guardian as the “hardest-gigging man in British jazz.” Atzmon tours extensively around the world.   His albums, of which he has recorded fifteen albums to date, often explore political themes and the music of the Middle East.

He is fighting a law suit in the British high court on free speech.


Together with veteran Pink Floyd star Roger Waters and many other artists and thinkers worldwide, I am being subjected to an international smear campaign, orchestrated and promoted by various Zionist institutions that attempt to silence every form of legitimate dissent of Zionism and Israeli politics.

Local councils, clubs and festivals that promote my music or my thoughts around the world are being subjected to a barrage of emails sent in a clear and malicious attempt to slander me. In these emails I am called an ‘anti-Semite’, ‘bigot’, ‘racist’, ‘Holocaust denier’, and so on.

Obviously, there is no truth in any of this.  As a writer I have indeed criticised Israel and other manifestations of Jewish political exceptionalism, I critically analysed Zionism, Jewish politics, ideology and identity politics in general. I do believe that all states, ideologies and politics must be subject to criticism, but I have never criticized Jews (or anyone else for that matter) as people, as a race or as a biological entity. In fact, my work is deeply anti-racist and focuses only on the political and the cultural.

He did an interview with me at KBOO on Friday during my episode on The Nakba: 70 Years of Oppression.

He will also speak Tuesday in Clackamas on Truthfulness and The Role of Controlled Opposition. 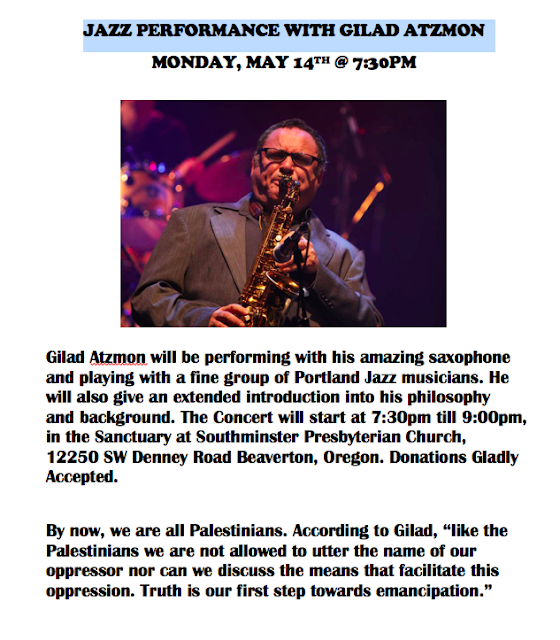