No Longer "Happy to Be a Presbyterian"

A few weeks ago I was banned from the Facebook group, “Happy to Be a Presbyterian.” I had been a member for some time, close to its beginning, I think. It has about 11,000 members and I think of it as the social media living room for members of the Presbyterian Church (U.S.A.), my denomination that I have served as a minster for 27 years.

I was informed by one of the moderators that I had broken the group’s rules. I don’t doubt that I broke the rules. I often break rules. But in this case, what rule? What rule was broken?  The moderator did not say except that I broke the clear rules. Spelling that out from my point of view will be the point of this post.

I should provide a bit of history about my relationship with my denomination. I am probably one of the most obnoxious ministers in the church. Many people do not like me. For good reason. I made a lot of enemies battling for LGBT rights (ordination, marriage). The same for my support of the Jesus Seminar, Evolution Weekend, and atheist ministers. Of course, I wrote and spoke out against the American Empire and its wars and Israel and its genocide of the Palestinians. I wrote about Peak Oil and the coming collapse of the American way of life (which will likely happen in very short order).

My record is public. You can find all the stuff I have done on my blogs, Shuck and Jive and  Progressive Spirit, and now on Facebook (even as I despise it). You can even read or hear nearly all my sermons including those I have preached at my current church. Speaking of my current church, waters are again rough as you can hear by my most recent sermon and read in my most recent missive to the congregation.  My days as a Presbyterian minister in a pulpit are likely numbered.

These days I write, speak and post against Islamophobia and in particular anti-Shiism, and have found renewed faith in God through my exposure to the person of Imam Hussain (a.s.) after having journeyed to Karbala. Let’s be clear. My theology like my politics are independent. I will not be owned by any gatekeeper of any religion, political party or movement.  I care about two things—Truth and Goodness.  I affirm this old Presbyterian principle:

“That truth is in order to goodness; and the great touchstone of truth, its tendency to promote holiness, according to our Savior’s rule, ‘By their fruits ye shall know them.’ And that no opinion can either be more pernicious or more absurd than that which brings truth and falsehood upon a level, and represents it as of no consequence what a person’s opinions are. On the contrary, we are persuaded that there is an inseparable connection between faith and practice, truth and duty. Otherwise it would be of no consequence either to discover truth or to embrace it.” (F-3.0104) 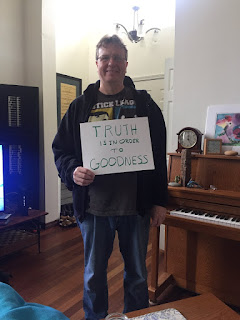 With that, let’s go back to what happened at “Happy to Be a Presbyterian”. I posted this link. This was a link to a study completed by the Civil and Environmental Engineering Department at the University of Alaska-Fairbanks regarding the collapse of World Trade Center Tower 7 on September 11th, 2001. The study concluded

Within 38 minutes my post was removed. I posted it again. It was removed again almost immediately. I messaged the three moderators asking them if they removed it.  Each said no. One even suggested that Facebook might have removed it. After messaging the moderators, I posted the link to the study for the third time. It was again removed immediately. I wrote another piece (without the link to the study this time) saying what just happened with my suspicion that Facebook removed the post (they have done that before).  A spirited conversation resulted with many people commenting.

Finally, in the course of the conversation, a fourth moderator emerged and said he removed the post. I told him it would be nice in the future to let me know when that happens. In the course of responding to comments on this post, I once again linked to the study. In short order, the comments were frozen. The fourth moderator messaged me that he froze comments and and that my link to the study was again removed. That was the fourth removal of the link to the study. In my messages with him, he said he closed comments because the conversation was “not productive” and he removed links to the study because it “was not scientific.”  He decided that for 11,000 members of the group. I told him he was working for dark forces by his actions. I complained to the other three moderators about him. I was then told I was banned.

What rule did I break?

It wasn’t that I posted something political. Political stuff is posted there often, including previously by me. Maybe my post doesn't concern Presbyterians? It concerns everyone. A Presbyterian touchstone is speaking truth to power. Maybe I am just obnoxious. Maybe they didn't like that I protested the deletion rather than just accept it. I am sure people will say all of those things are rules I have broken. Whatever.

Here is what I think. I am a member of Religious Leaders for 9/11 Truth and have been for nearly ten years. Exposing the lies of our government regarding the events of September 11th, 2001 cannot be tolerated by our media or any of our public institutions including the church even as the church is founded on the truth of Jesus Christ.

That is the rule that I broke. I posted information that shows that our government lied and continues to lie about the defining event of this century. I posted information from an accredited university. I posted a study showing that our government lied. This is no small, insignificant lie. This lie has resulted in massive surveillance, torture, Islamophobia, the stripping of civil liberties, post 9/11 wars costing trillions of dollars, the destruction of nations, and the deaths of millions. It goes on. It matters.

A 47-story skyscraper came down in 7 seconds (2.5 of those seconds at the acceleration of gravity). Obviously, it was the result of explosives. This is only the beginning of the lies.  We have been lied to. And I am squealing.

It is Hussain who has given me the spiritual courage to write about it and talk about it come what may. Since going to Karbala, I have been writing and posting more about this (and other crimes of the elites) than I ever have. I don’t care if Muslims or Christians don’t like me talking about this. Muslims don’t own Hussain any more than Christians own Jesus.

Hussain knew he would be martyred. He and his 72 companions versus 30,000? Seriously? What other outcome is there? But he is victorious. His story lives. Thus he lives.


As for Jesus. He, too, was martyred in Jerusalem at the hand of Rome and its temple conspirators. He stood for truth. He knew he would be martyred. What did he think he could accomplish turning over tables in the temple? He lived for truth. Like Hussain’s his was a losing cause. But he is victorious. His story lives. Thus he lives. Jesus is also my spiritual inspiration.

When Imam Mahdi and Jesus reveal themselves, then I guess we will all know. All of us will likely be wrong about a lot of things.

In the meantime, I care about truth and goodness. I will speak it so help me God.

I am sad I am no longer “Happy to Be a Presbyterian.” It is my family. But, as we know, all families are toxic when they require you to suppress your truth to be a part of them.

I am leading a study of David Ray Griffin’s book The Christian Gospel for Americans: A Systematic Theology, for four Tuesday evenings in October (8, 15, 22, 29) from 7-9 pm at Southminster.

Dr. Griffin writes that the church is in a time of status confesionis (confessional status) in regards to the American Empire.

It is now time for Christians in America—actually, long past time—to engage in an extensive examination of the nature of the American Empire to see if it is so “perverted and oppressive” that Christians, individually and as churches, should “publicly and unequivocally” reject it…

American political, economic, and military leaders have long been engaged, since at least the end of the Cold War, in a “global domination project,” similar to the Nazi project. Like the Germans, America has used its power toward bringing the whole world under its control. How could we fail to regard this American Empire’s domination project—like the Nazi project—as wholly antithetical to Christian faith?

Our Christian faith at its best would lead us, both as individual Christians and as churches, to oppose the American Empire in the name of God. As long as the church does not explicitly oppose this empire, it is, by its silence, a de facto supporter.