These are the notes from a speech I gave at the Hussain Day Conference in Somerset, New Jersey at the Masjid-E-Ali Mosque. The conference was entitled, "Rise Above Hate."
It was sponsored by Payam-e-Aman and Stand With Dignity. 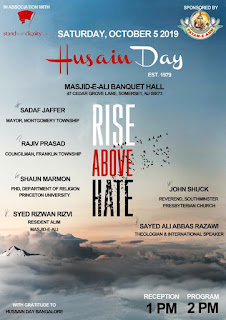 Last year I had the opportunity of a lifetime. I don’t say that lightly. It is an experience that will stay with me for my lifetime, insha’Allah.  I visited the shrine of Imam Hussain (peace be upon him) in Karbala, Iraq during Arba’een, the largest annual peaceful human gathering in the world.  Estimates range from a low of 15 million to upwards of 30 million people who make the journey to Karbala every year.

My friend and I made a film about it. You can find it on YouTube, “For Love of Hussain.”

The trip was sponsored by The Husayniah Islamic Society of Seattle. Sister Zahra Abidi has a vision for a Hussain Revolution in the United States that includes bringing people together to discuss important things, sometimes controversial things, but things that matter not only to Muslims but to all human beings. That is how I met her.

In addition to being a pastor I host a radio show on KBOO, a community radio station in Portland. I moderated a panel discussion regarding the war against Yemen at Portland State University in February 2018. It was entitled “The US – Saudi Coalition: Bringing Peace or War?”

It was in the follow-up of that conference during an email exchange that I first heard of Hussain. He was referenced in regards to the panelists, all of whom had taken risks, and had sacrificed in varying ways for their work in bring truth to light. Each of the panelists was a truth-teller. They told inconvenient truths about the powers that be.

That is how I was introduced to Imam Hussain (Peace Be Upon Him). He was a truth-teller and was martyred for embodying the truth. I knew nothing else about him except that.  I wanted to learn more.

Sending Christians and Sunni Muslims to Iraq for Arba’een is one of the things Sister Zahra and the Husayniah Society of Seattle does. I am happy to support her good work. They have just purchased property in the north of Seattle, in hopes, insh’Allah, of creating a center. I am sure she would love to talk with you about it and hear your encouragement. You can visit their website.  Search Husayniah Seattle.

The Husayniah Islamic Society of Seattle paid for the trip for my friend, Josh, and me. Josh has done some filming. So we went to make an amateur documentary.  It was more than that for me. This was timely in my life. It was a search, you could say. I have been experiencing I guess you could say a spiritual growth spurt.  Maybe it is a mid-life crisis.  I have discovered the need in my own life to search more deeply about what is really going on in our world and what are the forces at work and to what paths we are being led. I realize I cannot trust our traditional sources of information, especially the mainstream media to do that.

I am discovering that these forces are dark forces as the title of this conference indicates. Rise Above Hate.  What is hate? How do we rise above it?

You really cannot have an interfaith interaction and expect not to be changed in important ways. Unless we are vulnerable enough to have our hearts touched by another, it is not really an interaction. It is just us trying to convince others of our position. It is just a sales pitch.

I cannot worry about whether or not others are changed by what I say. That is up to God. I want my heart expanded by others—by you.  Or to put it more accurately, to have God expand my heart through you.

That has happened a great deal in this past year in all my interactions with Muslims through the Islamic Center across the street from my church in Portland and with the Husayniah Society in Seattle as I mentioned, through my on-line interactions, through the generous opportunity to attend conferences, through the helpful resources in which I am slowly beginning to learn more about Karbala, through reflection, through my ministry in my church, and, of course, through the opportunity I was given to visit the holy sites in Iraq.

That is what I think it means to “rise above hate.”  It means to have one’s own heart expanded. Let me explain.

You know the book and movie, “The Grinch who Stole Christmas” by Dr. Seuss?  The Grinch’s heart was three sizes too small, remember? He hated the Whos in Whoville. Then, by a miracle, his heart expanded. He met a Who, Cindy Lou Who, who showed him kindness and he saw what the Whos really loved and valued, what the birth of Jesus (peace be upon him) meant, not things, but generosity, and the Grinch’s heart grew three sizes that day.

Sometimes the simplest children’s stories tell the most profound truths.

Hate is out there. We can find it in our institutions in our governments. They can be overtaken. In my tradition, we call this force the demonic. It can take over a whole nation. The demonic does not work for the good of the world or the people or its creatures. It works to divide us, to shrink our hearts with hate. The demonic works in secret. It works in the dark. It works with deception. It works with lies. It works with marketing. There are forces at work in the world that want to shrink our individual hearts and our collective heart as a people. So we live in suspicion and fear and become docile to these forces.

Any of us, all of us, are susceptible to having hate shrink our hearts. Hate is like a toxic weed that grows in the soil of ignorance. Hate is the result of so many complex negative emotions. You can’t convince people or prove to people or sell people on your opinion.  You can only actually love. You can only do that by allowing your own heart to be expanded by another.

Rising Above Hate. How do we do that? If hate shrinks our heart, how does love expand our heart?

How do we become courageous? How do we expand our hearts?

The Buddha in the Dhammapadda is reported to have said:

So I am in the Shrine of Imam Hussain (peace be upon him). It is beautiful. The air conditioning is on. It is filled with the sound of prayer. People are crying. Some are standing. Some are sitting. Some are in various positions of prayer.  Poetry is being recited from many places. I don’t understand a word of it, except now and then I hear a name I recognize, Ali, Zainab, Abbas, Hossein.

This is about a week before Arba’een. I am with the tour group. I decide I want to go and touch the big box in the center of the shrine, the lattice work above the grave of Hussain. At first I wasn’t sure if I would do it, or should do it. If it was appropriate. Hussain was not a person in my religion. But I kept hearing all week that Hussain is for everyone. So I decided to go and do it.

I don’t know what it is like on the women’s side, but on the men’s side, even a week before the day of Arba’een the place is packed. it is a push and pull like ocean waves of bodies. Your feet almost leave the ground. There are so many people. You know where you are headed. And you aim for it. But it is like swimming in the ocean. You don’t need to be aggressive but you need to hold your own. You swim through the bodies, pushed left and right. Finally, I got close enough, almost there.

I should stop again. I was conscious of being different. Different religion. I only speak English. From America. My reddish hair, now reddish-gray, pale skin.  Of the thousands of people inside the shrine that day, I was probably the whitest guy in the room. I reach up and put my hand up to touch the lattice work and I can’t reach it.

A hand took mine and pushed it up against the grate. It was a brown hand, taking my white hand up against the final resting place of Imam Hussain (peace be upon him). It was a visual imprint in my mind that beyond all color, all race, all religion, all language, the language of love and truth and courage is one. The love of Hussain. Our eyes met. We just looked at each other.

As I swam away, just a few yards away, I saw this man. He stared at me. Tears were streaming down his face. He asked me as many did on my trip, “Where are you from?” I told him, America.  He just started bawling. He hugged me and kissed me. I have joked that I never have been kissed by so many men with scratchy beards.

But what is this?

Iraq. A country that felt post-apocalyptic to me. I, like many of us Americans, watched from a distance as our leaders lied us into war, destroyed Iraq, and then ignored its suffering. No one goes there. No one that I know, except my brother-in-law. He is a professor at NYU and he goes often to the northern part of Iraq because of his work of peacebuilding with the University of Duhok. Besides my brother-in-law and soldiers, I know of no one who had been to Iraq. A country that Americans like me need to visit. A country devastated by the demonic, by lies and wars, by bombs and depleted uranium. By hatred from outside powers, mercenary terrorists and puppet tyrants, the people left to fend for themselves.

The US state department tells Americans not to go to Iraq.  Too dangerous. Bad. Whatever. What did I find? I found love. I found tears. I found joy. I found hope. I found my heart had expanded.  A Christian American was embraced and shown the love of Hussain (alayhi s-salam).

That is how we rise above hate.  We allow ourselves to be vulnerable so our hearts can expand. If you cannot go to Arba’een, then bring Arba’een here.

Courage is the result of an expanded heart. With courage is insight to tell the truth as best you know it when you need to tell it.  That is what I try to do now in my ministry and on my Facebook page and radio show, where ever I do my thing. That doesn’t mean I know truth more than others. That doesn’t mean I am not ever wrong. I am wrong often.  Courage is admitting it and learning from it.

But it does mean that we cannot be afraid of what we know or of what we learn because of the discomfort of truth to us or others or to the powers that deceive.

Nor can we be afraid of exploring and researching in taboo areas.
Exposing the demonic and its lies.
That is where the hatred infests.

Nor can we be concerned if people will reject or ridicule or whatever they must do to protect their illusions. Hussain’s sacrifice shattered all illusions.

In particular, he shattered an illusion that you fight hate with more hate and that you lead with power and coercion.

Hussain showed the world that you lead not with might but with right.  You fight hate with love from an expanded and courageous heart.

That has always been the way that the true heroes rise above hatred in all its forms.

May we all be heroes in that same spirit.