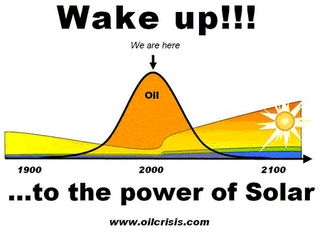 It is time for part two!

What makes stuff go? Energy, baby. As Eric Idle has shown us in song, the sun “is the source of all our power.” You might want to listen to him again to put yourself in the right frame of mind!

However, that darn sun is difficult to harness. For the last 150 years or so, we have found our energy source by digging. What makes stuff go? Oil, baby.

We are so addicted to oil that we can barely imagine other sources of energy. As much as I would like to hope that oil is in endless supply, it does not appear to be so.

But he may not have missed by much. Many really smart folks have suggested that world oil supply has already peaked or will peak soon.

The concept I learned just a few months ago is “Peak Oil”. If you search “Peak Oil” on Google this site will appear first.

One of the primary spokespersons for Peak Oil is Matthew Simmons. He is no left-wing Cassandra. He served as energy advisor to President George W. Bush.

Wondering why gas prices are now $3.00 per gallon?

What does this mean?

It means we had better get our acts together.

The used to export oil. We had so much of the cheap stuff that we sent it away. Now, we import it. We import it from some countries that are not too friendly toward us. This site will provide much information regarding oil imports.

Oil is not our only source of energy. We still have a lot of coal. The Scientific American
has devoted its September 2006 issue to energy. The editor is confident that we have the energy we need. You can hear a podcast regarding this.

Yet even the editor of SA is concerned. Are we headed for a hard or soft landing? Can we make the transition?

I am no expert. Yet, I cannot imagine any of us not taking this seriously.

In Charles Dickens’ A Christmas Carol, our hero, Ebeneezer Scrooge, is confronted by the Ghost of Christmas Future. Scrooge asks him if the shadows the ghost presents are certain to happen or if they may happen. The Ghost does not answer. The answer is up to Ebeneezer.

The answer is up to us.

The first step is to get real about what is happening.

When I first learned of Peak Oil six months ago, I became really depressed. I watched the film, The End of Suburbia with several others in my congregation. It is an important film and a copy is in our church library.

It has taken me awhile to process this. I found help on a site dedicated to those who are aware and reeling. It is a place to talk about the feelings and the impact of Peak Oil.

Again, I am not saying that their conclusions are what will happen. But like Ebeneezer Scrooge after his revelation...

I am ready to get active.

We do not need to move from not being aware immediately to despair.
The middle step is action.

Conservation certainly would help. We could use less energy. However, if that is all we do, the prices would simply go down and we would use more. What if we added a dollar tax to every gallon of gasoline and then used that tax to fund R&D for alternative sources of energy?

I do not have the answers. But we do. We, together, the people, have answers. We need to put our heads together. We need to make our voices heard. And we need to demand of our elected officials (and those desiring to be elected) that they regard this issue as a top priority.

Here is an interview by Jim Puplava with Richard Heinberg entitled, “The Party’s Over.” Heinberg has the hope that “if we keep cool heads, remain optimistic and make good choices, our grandchildren could be living in a very beautiful world…”

Next time, I will talk about the major difficulty regarding change.

It is the third “E” Economy.