"Tennessee Is Better Than Blowing the Tops Off Its Mountains"

The title of this post is from a prayer delivered before the Tennessee Senate opened this morning by Presbyterian Minister, Rev. Michael McGloughlin.  Watch and listen here.

Sorry.  No way.   Tennesseans do not want you outsiders blowing up our mountains.  Period.

This is coming to Tennessee unless legislation is passed to prevent it: 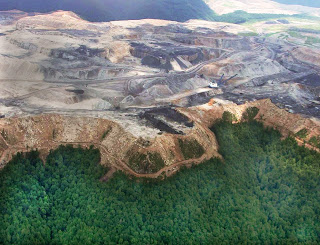 While we are terribly disappointed by the mockery of the legislative process made by Senator Bell, the fact is that the bill could have died in Committee today, or it could have moved to the floor. We now have a chance to go to the floor of the Tennessee State Senate and have a conversation about mountaintop removal, while trying to add some meaningful language back into this bill.

I just received this from LEAF:


LEAF is very disappointed with SB 577 as amended by the Senate Energy and Environment committee on Feb. 29, 2012.


The sponsor, Mike Bell, and the Lt. Governor both say the amended bill simply codifies current practice. Current practice includes blasting off Tennessee's ridgelines. For five years, citizens of this state have asked the legislature just to put a buffer zone around the highest elevation ridgelines. Now they have passed a bill which they admit does not change the status quo, and call that a "point all honest stakeholders can be proud of." The bill was not discussed or shared in advance of the committee meeting with any stakeholder other than industry. Industry does seem to be proud of the bill as now written.


As to the substance of the bill:


LEAF must take exception with the claim that SB 577, as amended by the Bell Amendment #0137872, is a ban on mountain top removal.


LEAF's request to stop mountain top removal, is not a shell game or semantics. We mean, do not let coal companies blow the top off mountains to get the coal out. LEAF is not working for a bill like the current amendment that relates to what happens after the mountain is blown up. We are concerned with the only time that matters for Tennessee’s virgin mountains, before the permit is issued.


The bill voted out of committee repeats federal law on what coal companies do with “overburden,” a sad industry pseudonym for the little pieces the mountain becomes after it has been blasted apart. LEAF is not working for a bill about where to put the little pieces. LEAF seeks and will continue to seek protection of the natural ridgelines.


The bill, as amended, says that there is no mountain top removal so long as the coal industry molds the rubble into the “Approximate Original Contour.” The Northern Cumberland Plateau is not known for “Approximate Original Mountains.” It is known for some of the oldest and most beautiful mountains on this earth, molded not by engineers and bulldozers, but by the hands of God himself.


If a state has no mountain top removal, it has no need to reaffirm federal law regarding molding rubble. On the floor, LEAF calls on the Senate to redeem this weak deception by voting for the bill as proposed by the sponsor, the bill that requires the coal companies to leave the original ridgelines on Tennessee’s mountains.

I am happy my denomination is stepping up.  This is from the PC(USA) Washington Office:

As part of our prophetic witness, we take a stand against the injustice of mountaintop removal coal mining and the devastating impacts it has on Creation and local communities' health and livelihoods.


Over the past 20 years, mountaintop removal mining has left thousands of communities in extreme poverty, destroyed 14 million acres of forest and 2,000 miles of headwater streams, and leveled 501 mountains.


Mountaintop removal puts nearby communities at risk from: mudslides, flooding, loss of crops, and increased levels of birth defects, respiratory disease, and cancer.

I have been told that Stated Clerk (and Tennessean, Rev. Gradye Parsons) will write an op-ed for the Nashville Tennessean that hopefully the paper will print.

In the meantime, it is critical to contact your Tennessee Senator before March 8th when it could go before the senate.   Tell her or him to restore the original language of the bill and protect the original ridgelines of Tennessee's mountains.  SB 577.

For inspiration, last Sunday following worship members of my congregation sent a total of 119 handwritten leetters to key people on the committee.  Please send a letter to your senator. 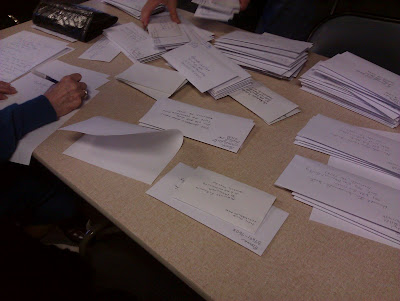