We Are Going to Make This Place Your Home

Lovely and I returned from GA at 1:30 this morning.  I am going to take a few days of R and R and then write some blog posts about my experience at General Assembly and the actions taken by the assembly.

Presbyterians are enjoying and enduring their 15 minutes of fame and pundits of all varieties are posting opinions of the actions.   Have fun reading all of that.  I am exhausted and will wait to offer my thoughts as I process them later this week.

I will also host a conversation about GA probably next Sunday evening (June 29th) at my church.  I will present the actions of this assembly and allow people to ask questions and voice their thoughts.  More details on that to come.  But...I do need to post this picture from the LA Times. 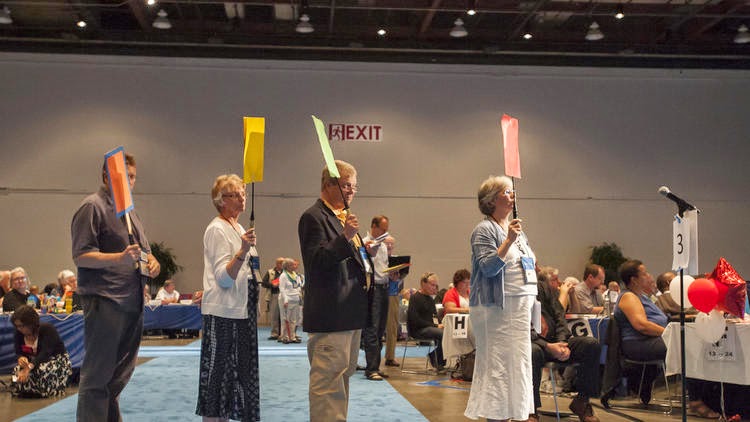 That is me in the back hiding behind the orange sign.  The reason I kept my sign low is not because I am particularly bashful, but because I didn't want to capture the moderator's attention until the opportune time.  When that time came I raised the sign to catch the moderator's eye, called the question, and thus moved the assembly to vote.   We defeated a measure that would have delayed action for two more years.   I had a speech prepared, but felt my role was to move the proceedings in a good direction rather than offer my opinion especially after so many others had done a great job doing just that.

What did we decide?  We got everything we ever wanted and could get.

We approved an "Authoritative Interpretation" of the constitution allowing for teaching elders (clergy) to officiate at any wedding in states in which that wedding would be legal.  It allows churches to host those weddings in their sanctuaries.   So for example, the wedding for Katy and Amber at which I officiated in New York City would fall under this ruling.   This is in effect now.   PCUSA ministers can officiate at same-gender weddings without fear of disciplinary action.  Here is the text:


“When a couple requests the involvement of the church in solemnizing their marriage as permitted by the laws of the civil jurisdiction in which the marriage is to take place, teaching elders have the pastoral responsibility to assess the capabilities, intentions and readiness of the couple to be married (W-4.9002), and the freedom of conscience in the interpretation of scripture (G-2.0105) to participate in any such marriage they believe the Holy Spirit calls them to perform.

“Exercising such discretion and freedom of conscience under the prayerful guidance of Scripture, teaching elders may conduct a marriage service for any such couple in the place where the community gathers for worship so long as it is approved by the session; or in such other place as may be suitable for a service of Christian workshop.”

It was approved by a vote of 371-238.  Regardless of what happens in the second action the assembly took, the above ruling will stand.  The second action was to change our Directory of Worship to reflect marriage equality.   Here is the key text:


“marriage involves a unique commitment between two people, traditionally a man and a woman.”

The phrase "traditionally a man and a woman" was an amendment made by the leaders of Covenant Network and More Light Presbyterians (the two leading LGBTQ advocacy groups) for the purpose of being conciliatory.  Nothing is lost with this amendment and it is true.  Traditionally marriage has been "a man and a woman" in our denomination, and now it is between two people.  This vote passed 429-175.

Because this requires a change in our constitution, it will be sent to each of our 172 presbyteries for a vote.  If 87 presbyteries vote in the affirmative the constitution will change for the entire church.  That is our work for the next two years.  This will be a significant move for marriage equality.   We have our work ahead of us, but now, we celebrate!

Speaking of celebration, next Sunday is More Light Sunday at First Presbyterian Church of Elizabethton, Tennessee!   It will be a party, Beloveds!   Get the word out!

We are making this place your home.