Interview An Atheist At Southminster

This Sunday I am thrilled to welcome Kile B. Jones to Southminster.  Kile is the founder of "Interview An Atheist At Church Day." 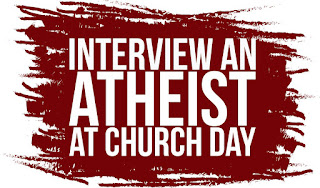 Why would we want to interview an atheist?  Here are Kile's thoughts on that:

Interview an Atheist at Church Day is a project created by Kile Jones, a Ph.D student at Claremont Lincoln University, an inter-religious school to train ministers. Kile is an atheist who is interested in helping liberal religious people work together with unbelieving communities for the betterment of society.

Interview an Atheist at Church Day is a community project aimed at bettering the understanding between atheists and religious persons. We hope to connect atheists who are willing to be interviewed with congregations in their area that are interested in developing ties with atheists in their area. The “day” represents our desire to grow into something far-reaching and beneficial to atheists and churchgoers alike.

As unbelieving populations around the world continue to rise, dialogue and understanding between atheists and people of faith is more important than ever. We live and work in the same world: understanding better what both unites and divides religious and non-religious people can only help us make this world a better place.

I interviewed Kile about this project a couple of years ago.  You can hear that podcast.   Kile has posted a number of the interviews on the website.

On Sunday, I will ask him about the project, his experience of being an atheist in America, and why it is important for liberal religious people and atheists to develop ties.   We will open up questions to the congregation as well.   He'll stay after church for a while for further conversation and dialogue.

If you are near our evergreen, join us at ten a.m. and share the Interview an Atheist Facebook event with your friends!

Also, this Sunday is the beginning of Sunday Starter, our adult education hour.  I am presenting the first four weeks on "The Evolution of God."   Get up a little earlier and join us in Room Seven at nine a.m!
Posted by John Shuck at 9/16/2015 03:46:00 PM