The Best Democracy Money Can Buy

Several of us watched Greg Palast's new film, The Best Democracy Money Can Buy:  A Tale of Billionaires and Ballot Bandits.   This is a great film.  A must see.  It will make you angry but it will also inspire you to fight for democracy, especially for the rights of the poor and people of color.


When Donald Trump says, “This election is rigged”—he should know. His buddies are rigging it.

Crosscheck is controlled by a Trump henchman, Kris Kobach, Kansas Secretary of State who claims his computer program has identified 7.2 million people in 29 states who may have voted twice in the same election–a felony crime. The catch? Most of these “suspects” are minorities—in other words, mainly Democratic voters. Yet the lists and the evidence remain “confidential”.

Palast and his investigative side-kick Badpenny do what it takes to get their hands on the data, analyze it and go find some of these 7.2 million Americans tagged “suspects” and “potential duplicate voters” whose votes are threatened this November.

They hunt down and confront Kobach with the evidence of his “lynching by laptop.” Then they are off to find the billionaires behind this voting scam. The search takes Palast from Kansas to the Arctic, the Congo, and to a swanky Hamptons dinner party held by Trump’s sugar-daddy, John Paulson, a.k.a. “JP The Foreclosure King.”

Palast and Badpenny stake out top GOP donors, the billionaire known as “The Vulture” and the Koch brothers, whom Palast nails with a damning tape recording.

Voter repression and voter suppression is a reality and Palast lays it out for us.    Here is an article he wrote about it for the Rolling Stone.   We learn about caging, purging, and what he calls the death star, interstate crosscheck.  All of these methods are removing people from the voter rolls or not counting their votes when cast.   It is ugly.  It's illegal.  It's nasty and according to Palast, it is why Bush "won" twice.  It is happening now.

See this film and show this film (we chose the $50 license fee option) wherever you can before next Tuesday.

Get active.  Here are Palast's seven ways to beat the ballot bandits. 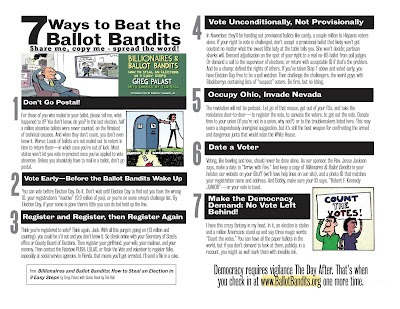