I begin tomorrow my trip to Iraq. This wasn’t on my agenda. That is how it is with things that matter. Spirit blows them into your life. I read that Isa (Jesus) is the Spirit of Allah. Husayn is the Spirit of Isa.  Ali Asghar was the youngest person martyred at Karbala. He was six months old. He was the son of Husayn and Rubab. 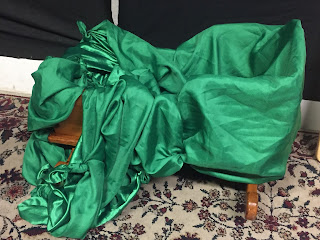 This crib was one of the ways he was remembered at the Islamic Center of Portland on Ashura, the day that commemorates the martyrdom of Husayn and his 72 companions including members of his family, including his son, Ali Asghar. As I write this, I wonder if the spirit of Ali Asghar is in the children of Yemen.


A somewhat grainy video, presumably shot from a decade old cell phone, shows more than two dozen load Yemeni kids, aged 6 to 15, playing, laughing, and excitedly moving about their school bus, invoking warm childhood memories for anyone who has ever caught a bus to and from a school outing.

Moments later every single one of these kids were killed, vaporized by a Saudi fired missile. This atrocity took place on 9 August, leaving 51 dead, 40 of whom were children, with most victims under the age of 10, while another 77 were seriously injured, according to the International Red Cross.

A Saudi fired missile made by Lockheed Martin in Fort Worth Texas:


Remnants of the missile, which were posted on Twitter by Hussein Albikaiti, a Sana’a-based journalist, show its CAGE code, serial number, and the wording, “FIN GUIDED BOMB.”

A search of the CAGE code shows the missile to be issued by US defense contractor Lockheed Martin, while the serial number shows it to be a MK-82 missile manufactured by General Dynamics in Fort Worth, Texas.

“A US made laser guided bomb did this 2 a bus full of school children,” tweeted Albikaiti. “The bus was directly hit by a Saudi-UAE jet, fueled by USA plane, coordinates by US and UK satellites. One bomb sent these happy children to the graves after burning them alive and cutting them to pieces.”

I do not know what is in store for me or what I should expect as I make my Ziarat to the various shrines in the Holy Land of Iraq. John Andrew Morrow in a beautiful article about "The Call of Karbala and the Awe of Arbaeen" also writes this:


Iraq is a country that has been bruised, battered, and brutalized. It has suffered under the savagery of the Baath regime. It suffered through a senseless fratricidal war with Iran. It has suffered from American wars of aggression, invasion, and occupation. Millions of civilians lost their lives. Although Iraq has little in terms of infrastructure, and has spent over one hundred billion dollars in the war against ISIS, it hosts, with pride and pleasure, the largest religious gathering in the world, a peace march that receives essentially no attention by the major media outlets in the world since it contradicts the Islamophobic narrative that they advance.

I am going to Karbala and I am not even a Muslim. Many don't think I am even a Christian. Why argue? They are right as far as it goes. Johnny Cash said he was a C-minus Christian. For the likes of a heretic like me, a C-minus is an aspiration. I am afraid I would be an even worse Muslim. So how is it that I am going on the most spiritual event on the planet to honor some of the most important figures of Islam? I don't know. I know many, many Muslims hope to do this their whole lives. I don't take this lightly. I am humbled to be invited by my friends at the Husayniah Society of Seattle, yet on another plane, the invitation comes from Imam Husayn himself, who in my mind, is the spiritual brother of the historical Jesus. The Spirit of Allah. Truth and Goodness is my shorthand.

"Hal man nasirin yansurun?" "Is there anyone to help me?"

And the response from those with ears to hear:

I am here. We are here to hear.
Hear voices silenced by the oppressors and their media.
Hear the cry of Ali Asghar and the children of Yemen.
Hear the cry of the faithful, "Labbayk Ya Husayn!"