(Update: October 5. Just learned from an admin at that group that none of them removed the post. It must have been Facebook.  Take comfort that Big Brother is keeping you safe from mayhem like me).

The Happy to Be Presbyterian Facebook Group is not happy with me. I posted a link to my interview with Fran Shure and after few exchanges (civil from my end) the post was removed. Erased. Even the notifications in my history were removed. I don't know if it was group admins or Facebook who removed it. 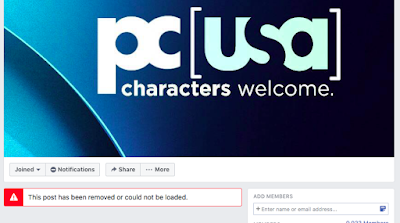 It was removed right after I posted a link to a study guide that had been created for David Ray Griffin's book, Christian Faith and the Truth Behind 9/11.  That book was published by WJK Press of the Presbyterian Publishing Corporation (PPC) over ten years ago. The book was later removed by the PPC in a shameful act of censorship. Dr. Griffin talks about that in his address, 9/11 and Nationalist Faith: How Faith Can Be Illuminating or Blinding.  He addresses Presbyterians in Section 3 B.

It was a strange feeling to have my work, just a Facebook post in this case, completely erased without a word, to vanish as if it never existed. I broke no rules. I was not aggressive. I did not use bad language. I wasn't even informed as to why the post was removed. Just gone. Why? What else could it be but that the content of what I posted is a direct threat to Empire and to Empire's church? Empire cannot dispute the evidence. It can only try to mock it and when that fails, to erase it.

We cannot live this way, citizens. Those who are seeking to unmask the powers of death and falsehood and bear witness to what they think is true, are being erased.  As Graeme McQueen said in my interview with him:


And so it’s the job of citizens to stand up and say, “We are whole persons. And our perception, and our sense of smell, sense of hearing and sight and touch, they are valid. And we know how to use our intelligence. And we’re going to insist on that. We’re going to speak out loudly for what we believe is the truth.”

I posted the link again. And I wrote this:


A little about myself for those who do not know me. I am a PCUSA minister in good standing and the pastor of a church. I have posted occasionally on this forum, not often, but when I think a particular topic is of interest and importance. I am the host of a podcast and radio show that has aired weekly for nearly seven years. I have interviewed many Presbyterians including two moderators and a vice-moderator. Throughout my ordained ministry, I have been concerned deeply about issues of censorship and the silencing of unpopular voices.

As it says in our Brief Statement of Faith:

"In a broken and fearful world
the Spirit gives us courage
to pray without ceasing,
to witness among all peoples to Christ as Lord and Savior,
to unmask idolatries in Church and culture,
to hear the voices of peoples long silenced,
and to work with others for justice, freedom, and peace."

This book that I featured for the past four episodes on my radio show offers evidence that should lead people of conscience to explore. The voices I lift up in this show are voices who have been long silenced, censored, vilified, and mocked because they seek to unmask idolatries in church and culture. I am not saying that anyone needs to agree to these voices or even to listen to the podcast. I should, however, be able to post a link to it without my post being removed.