A Sermon for Conspiracy Theorists

I haven't prepared a sermon since I left my church in November. Now that the country is doing "virtual church" and since I am a "virtual pastor" I thought I would create a "virtual sermon" for you to "virtually read."

Today is March 15th, 2020. It is Sunday. It is the Third Sunday of Lent. Many churches are closed. Many are offering instead “virtual worship.” The goal is of course not to gather in order to slow the spread of the coronavirus that has now been called a global pandemic.

It is this pandemic that made me think about my vocation. I am no longer the pastor of a congregation. Yet I still feel like a pastor. I feel the need to be pastoral to someone. A pastor should say something about our situation from the perspective of the Gospel. I wrote this on my Facebook page this past week:

“I am no longer the pastor of a congregation. It would be interesting to be one at this time. But still I am a pastor at heart. However this pandemic shakes out, either with massive death or sickness, or if it fades away, pastoral care is needed especially as we enter, in the US at least, unprecedented isolation and grave economic hardship as our economies (especially our individual household economies) are threatened by all of the shut downs. Perhaps we need more than anything a Gospel perspective as opposed to the partisan political perspectives that dominate so much of our discourse. Namely, I think we need to come to terms with fear in relation to survival and accepting anything authorities may do, whether illusory or real, that momentarily alleviates that fear. The reality is that we all will die someday. That fear of death must be faced. Life in the gospel is living as if one is ready to die. That of course is the gospel’s freedom. We live for this moment. For truth, for justice, for love with courage. When we die, we die as those who go forth to live.

I am not sure what I can offer as a pastor in this unique time for me as a pastor without a church. Perhaps I am at this point an internet pastor. I have been spending my time since leaving my last church reading, researching, and sharing what I learn from others on this FB page. It doesn’t seem like much. But it is what I do now in this time of my “sabbatical.” But more I feel is coming. There is a lot inside me that needs to come out.

Do know, whether you consider yourself spiritual or not from whatever philosophy or faith tradition or none, that I will do my best to communicate what I see to be real as uncomfortable and controversial as that can be. I will be wrong. I will not see everything. I will get stuck in a deceitful rabbit hole on occasion. But I will seek to explore what is real.

From whatever your perspective on philosophy/faith etc., you are welcome here.

I will do my best to be empathetic and hopefully kind as I do that. For those who find what I write and share too objectionable, then peace be with you in your journey. What will not work are attempts to silence me for following my path.

I do this, and I still do it as a pastor, because I feel called to it, summoned you might say. I have no idea what is to come for us as a country and a world. But I know that those guides who are real for me (Jesus and Hussain peace be upon them) are worthy of my trust.

Their example (and their presence that I feel) is stronger, more true, and more real than the enemies of humanity who I name here often and who I feel we are summoned to unmask, name, and engage.

I guess this is all to say that I am a pastor even at this moment—a brother in faith to some—a brother in humanity to others, and I am not afraid of what is to come for us, the human species, but I am ready and open to do what is to be done this day as a pastor.”

That is what I wrote a few days ago. Since today is Sunday, I wondered if it might be time to write a sermon. I started with the lectionary text for today, Romans 5:1-11, but my sermon didn’t seem to go anywhere. Although this line again sticks out as it always does. Paul writes that we

boast in our sufferings, knowing that suffering produces endurance, and endurance produces character, and character produces hope, and hope does not disappoint…


I decided not to write a sermon. But I want to write something. There is much in me that needs to come out about so many things. So much suffering is now and is on the way for so many people, for the whole of humanity. The most vulnerable, the elderly, the sick, will be on the front lines of this virus. If exponential infection proceeds as it seems to be doing, perhaps millions could die around the world, including in the United States.  My prayers and my gratitude are with nurses and doctors and first responders who are caring for the sick. As Presbyterian pastor, Fred Rogers, who we know as Mister Rogers, said, “Look for the helpers. You will always find people who are helping.”

I am taking precautions, not so much for myself, but so I don’t spread the virus if I am infected. We have been told that we can be contagious for weeks before we develop any symptoms. I am self-isolating with my wife and puppies. I don’t know what this is. I have no predictions regarding this virus. In this regard I am going along with the herd, but with a suspicious mind.

I could repeat the information we get from the mainstream media on our screens. But you know that as well as I do, possibly better, because I rarely watch it. My intuition tells me as well as what I have read and seen from people I trust, and from my understanding of recent history, is that something sinister is afoot.

I was asked if this is from God as a test. That is a question for which one can never be certain as are all questions about the workings of God. But I answered that I didn’t think it was from God. Yet in many respects, this is, as is all of life itself, a test.

Is this some random freak of nature such as the mainstream media tell us? Is this from eating a wild bat in a market in a China? My answer is again, I think not.

Aristotle is said to have said that “the mark of an educated mind is to be able to entertain a thought without accepting it.” So yes, I entertain many thoughts of conspiracy but I accept only those that are true. Aristotle might have been a conspiracy theorist. 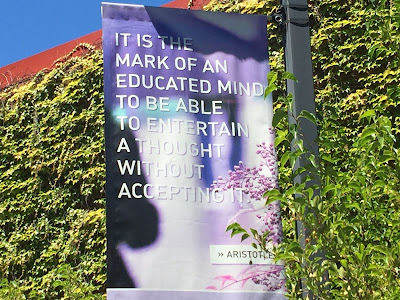 The quote unquote “conspiracy theory” that I entertain in this regard is that this pandemic is a combination of bioweapon/PSYOP to push through a variety of agendas. Whether it was unleashed in a calculated way or by an accidental escape from the laboratory is a larger unknown. People I trust entertain this theory as well and given that biological weapons are being manufactured all over the world under the auspices of governments and their militaries, it seems logical that would be the first theory any thinking person would explore. But the mainstream media, a megaphone for the powerful, will not entertain this logical theory and instead it promotes the theory that this virus is a product of nature and was transferred to humans by wild bats. This is most likely a cover story. The Hollywood film, Contagian, is a blueprint for this story.

The media cannot be trusted for the truth of what is really happening.

I say this with confidence. One piece of evidence will suffice for my view of the media. At 5:20 in the afternoon on September 11th, 2001, World Trade Center Tower Building 7 was imploded by controlled demolition into its own footprint in less than seven seconds. Mainstream media has covered up this story to this day on behalf of powerful agencies that are supposed to supply truth but do the opposite, at least on this matter, such as NIST, the National Institute for Science and Technology. The mainstream media by this continued cover-up shows that it has lost all credibility regarding anything of importance. Obviously, what happened on September 11th, 2001 and especially who is responsible is of utmost importance to the human race. Those who really did it are still in control of the world today and are protected by their propaganda arm, their own media outlets. 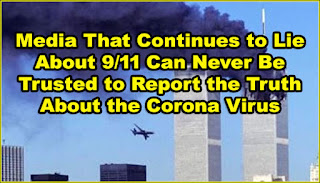 My working theory is that COVID-19 was created in a laboratory for the purposes of mayhem by the usual suspects and unleashed at this particular time and manner for a variety of reasons. Those reasons I do not know but I suspect these reasons have to do with population manipulation and control for the benefit of the world’s elite. Many people I trust and those I don’t have a number of views regarding what these agendas might be and I find it healthy to entertain them per Aristotle. As these new agendas are rolled out in the coming months and years, we will know, or at least those who follow Aristotle’s dictum will know.

The big question is whether or not the populace will know and with knowing will free themselves from slavery to the elites. I have decided that question is not mine to answer. I can only leave that to God. My calling or summons is to tell what I think is real to the best of my ability. That said I do believe that there are people who have a hunch that something isn’t what the mainstream media says it is in regards to all of this. Many are drawn to what conspiracy theorists entertain without admitting it to others or perhaps even themselves that these people may be right to question what we are told by official outlets. These curious people contain a spark in their consciousness that is waiting for ignition. That is my hope. But again, it is not my business. I just do my job. My job these days is assisted by an increasing freedom from concern about what others think.


“the rulers…the authorities…the cosmic powers of this present darkness…the spiritual forces of evil in the heavenly places.”

Conspiracy theorists are like Old Testament prophets.
No one liked them then and no one likes them now.

But as Paul says in today’s lectionary text,


we also boast in our sufferings, knowing that suffering produces endurance, and endurance produces character, and character produces hope, and hope does not disappoint…

Really I am not a pastor in my understanding of the word, because I have not been called to a congregation. But as a fellow seeker of what is true, I will hopefully be a fellow traveler to you should you decide this lonely path is yours as well.

At that I will heartily say, Amen.