I was on the Press TV program, "Palestine Files." This episode entitled, "Bethlehem in Jeopardy!", analyzed why the television game show, "Jeopardy" incorrectly ruled that the Church of the Nativity was in Israel as opposed to Palestine. Here is the story in The Intercept.

The Press TV program, now available on-line, wanted to explore why Jeopardy got this wrong, what is the reality for Palestinian Christians regarding Bethlehem and the Church of the Nativity, and was this Jeopardy error another sign of the calculated erasure of Palestinian identity.

I recommend watching the entire 25 minute program and sharing it widely. I was asked all the questions beforehand so I had prepared answers. The producers used two of my responses. I am on at 16:55. Here is the entire show.


Here is my response to the question:

According to several sources: Today, there are 23 settlements, which take up 8.1 square miles (21 square kilometers) of the Bethlehem area.
Some 165,000 Israeli settlers — comprising about one-third of the total settler population in the West Bank— live here on hilltops, in houses marked by their red tile roofs what is Israel trying to do here? These settlements are, of course, illegal, and immoral. Israel wants to take over all of Palestine and perhaps more, piece by piece by piece.  Why Bethlehem?  In part, this is my speculation, I think the immediate goal is to hassle relentlessly the Christian presence in Bethlehem. Wear the Palestinian Christians down. Drive them out. Bethlehem is a very important cultural and religious site for Christianity.

I think the endgame is to take over Bethlehem itself and make it part of Israel. Then they will include the Church of the Nativity as a tourist destination for American Christian Zionists. A Disneyland kind of thing.  Israel will be caretakers of this Holy Christian site.

And the other question:

Who is trying to delete the Palestinian identity here? Is it just Israel? 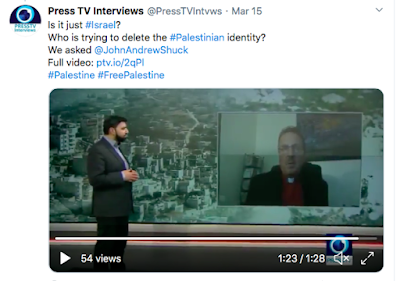 This is the big question, isn’t it?  Israel is more than just a country. Israel has more influence in the United States and throughout Europe and elsewhere than most people realize.  When you talk about the United States and its military-industrial complex, that which President Eisenhower warned Americans about in 1961, you have to see that Zionism is active in every part of it.

We should call it the Military-industrial-intelligence-finance-education-media-government complex. At the top of every node in this structure are ultra-Zionists.  They control the media, finance, congress, and the presidency. These wars in the Middle East against Iraq, Syria, Afghanistan and now Iran? They don’t benefit Americans. They benefit the elite who make money from it. And they benefit Israel. Netanyahu said 9/11 was very good for Israel. To point out this truth is to be labelled anti-semitic.

This is a global takeover. It is not by Jews. Jews are victims. American Jews more than any, need to separate Judaism from Zionism. They have been co-opted by these ultra-Zionists.

In a very real sense, we are all Palestinians. The Palestinians and Gazans are on the front lines. May they continue to resist and may people of conscience around the world support their resistance. Our struggle for freedom is tied up with theirs.