On Friday we received the official death certificate from the funeral home.   It took over three months for the officials to finish their work.   On the lower left a little box was checked next to the word, "suicide."   We knew that of course.  The police had originally told us it was an accident but eventually we determined what had happened.   Now it is official.  A box has been checked on a government document.  Signed. Sealed. Delivered.

Saturday was a hard day.  There are many hard days to come.   I wonder how long it will take for me to create my own meaning from this.  Grief experts say I need a narrative.   I suppose I have been trained for that task.  I am after all, a "religious professional."     One of my working definitions of religion is to create meaning out of a meaningless existence.   We are storytellers and narrative-makers.  We come from a long line of them.

Lawrence Krauss tells us that universes pop in and out of existence without any supernatural shenanigans.   We live and move and have our being in one of those "pops."  What does that mean?    The author of Genesis took a crack at it, "When God began creating..." as did the author of the Gospel of John, "In the beginning was the Word...."  I suppose for some Genesis and John still work well.   At times even for me.   I am giving it a college try to create my own narrative of meaning in a Krauss Universe.   You can find it in the pages of this blog and in my Sunday sermons.  It isn't much, but it's mine.

Religion tries to make sense of out of senseless tragedy and violence.  The Romans tortured and executed thousands of rebels and undesirables by public crucifixion as a warning and as demonstration of power.  One of these poor wretches is named, has stories attached to him, and is turned into a god.  His death saves the world from sin.  His resurrection brings believers to eternal life.  That is quite a narrative.  It was a narrative compelling enough to create Christendom.   It works for some.   At times, even for me.    I am giving it a college try to create my own narrative of the meaning of Jesus.   You can find it in the pages of this blog and in my Sunday sermons.  It isn't much, but it's mine.

I admit that I am better at deconstructing than constructing.   I am better at poking holes in narratives than in creating them.   But my personal task now is to construct.  So what is the narrative for the life and death of my beautiful boy?    It won't be much but it will be mine.    Hopefully, it will be a narrative that will help me to carry on, to forget myself in laughter more often than not, to get lost in a sunset, to grow old a little wiser, to grow closer to my Lovely and my daughter, to own my sad feelings and to weep through them, to discover a deeper sense of compassion, to live life as fully as I can, and to live it for my son and for me.   I want my narrative of Zach to help me do that.

It will have to include the story of the time he called us into the bathroom.   He was maybe two or three.  He was sitting on the toilet, bent over with the seat cover on his back.  He laughed and said he was a teenage mutant ninja turtle.  Any narrative of my Zach will include a story of him racing down the street in his Big Wheel wearing his cowboy boots.   It will include him standing proudly with me and greeting parishioners on their way out the door.  It will have to include both of us in our Taekwondo uniforms, and playing video games, and skiing at Snow Ridge.  Hugs.  How do you tell a narrative about Zach hugs?  How do you put hugs in words?    The way he called me, "Pops."   How do I write the way he called me "Pops"?

His heart.  His big heart.   His big compassionate heart that wouldn't let him hurt a bug.  His big heart wouldn't let him stand for meanness or let him see someone bullied without speaking up.   His big heart and his mind knew pain.   He felt pain, excruciating, senseless, meaningless pain that he couldn't share, that I couldn't take from him, that I couldn't reach.   I don't know how to tell that story, not now, not yet, but someday I may be able to tell of his courageous and lonely struggle.   I may never grasp this meaninglessness, but I will tell his story--my story of Zach.    He gave us so much joy.   Amidst it all, he gave us joy.  I will keep him in my heart, always. 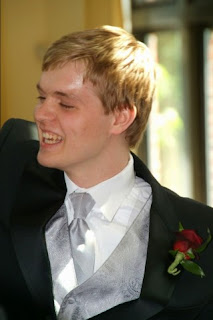