Why Portland Should Be Given a Chance to Hear Kevin Barrett


I am appealing the decision to cancel my March 9th interview with Kevin Barrett through the conflict management process. A happy outcome for me would be a big party, a debate between Kevin Barrett and Alexander Ross of Rose City Antifa who led the smear campaign against Dr. Barrett. 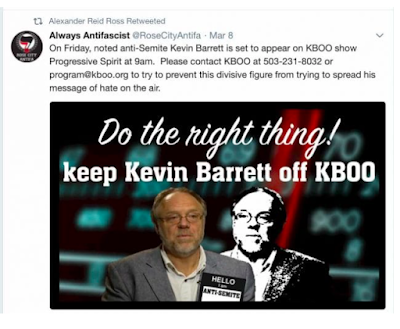 This same Alexander Ross is going to be on KBOO Friday, April 27th.

Interesting that KBOO staff thinks Ross is KBOO-ready when in fact he leads smear campaigns (hardly a Beloved Community value) and writes articles that have to be removed and apologized for  because he smears reporters (such as Max Blumenthal) as anti-semites, white supremacists and what have you. He's a peach. But I see no reason to ban him or censor him from community radio.  We should have a big party, a debate between Ross and Barrett. Bring out the cameras, the microphones, the band. Let's play Who's the fascist?  It can be a KBOO fundraiser. I'm serious.

On second thought, I think I will ban Ross.  Ani and Lyn, I hereby declare as a volunteer interpreter of KBOO values that Ross cannot be on your show on Friday. He is banned from KBOO. I have declared it. So it has been said. So it shall be done.

Alas, I have no power to ban. The keys to that kingdom belongeth not to me.

Beyond those tiresome spats and more crucial to the future of humanity, Barrett and Ross or Barrett and anyone else could debate what is happening in Syria and to our collective souls.  On my March 9th show, Dr. Barrett and I had planned on discussing false flags. A false flag is doing something bad and blaming it on an enemy to rouse up one's own population toward war or some other goal. False flags have been raised for this purpose throughout history. It is a preferred method for the elite to engage the masses in wars that are against their own interests.

It is not always easy to determine what is and what is not a false flag. That is where Dr. Kevin Barrett, and others like him, have a crucial role in enabling humanity to be critical of official narratives. He even has a show specific to this topic, False Flag Weekly News.

Did Assad really gas people on April 7th 2018? Could this be a false flag?

If we don't like those questions, then we do not need alternative media. We turn on our televisions, eat our salty chips and watch the wars of aggression and human suffering escalate while the mainstream media reads the cue cards.

One might make the modest case that it would be good for us to hear an alternate point of view especially when so much is at stake. Banning and censoring are only done when those who ban and censor have something to hide and when the facts call into question the narrative provided by those who control the media.

Banning and censoring are not done by those who seek truth. Those who seek truth welcome debate. They welcome a variety of points of view and say, "Let's discuss. Present your case. I will present mine." Alternative media such as community radio should be a place that provides this platform.

Dr. Kevin Barrett is an expert in helping us understand false flags. We need his point of view, not because I think his view is "the truth." Agree or disagree, he has important information to share. An open sharing of information and a lively debate about it is the heart of a democracy.

So listen to Ross on KBOO with Ani and Lyn. Pledge money during their show. But when you do, ask KBOO to invite Dr. Kevin Barrett to provide an alternative to Ross's point of view.