After completing my interview Friday with Hugh Turley and David Martin about their book, The Martyrdom of Thomas Merton: An Investigation, I saw this image on my Twitter feed. 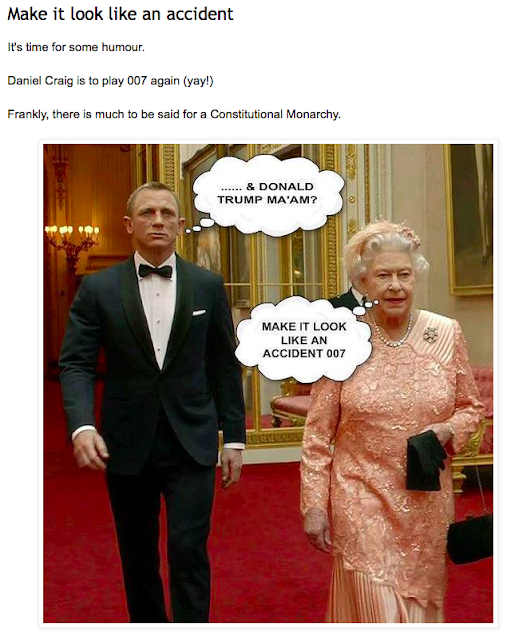 In the world created by Hollywood in which murder by governmental spy agencies is romanticized, I suppose it is. The spies only kill the bad guys, right? Bad guys like President Trump?

What is not funny is that in reality the spies kill the good guys, make it look like an accident, control the press, pass off lies as truth, and continue to kill to this day.

He was murdered on December 10th, 1968 and the murder was covered over to make it look like an accident. Lies and legends were created to promote the false narrative that Merton accidentally killed himself by touching an electric fan (or other appliance) while coming out of a shower. This story was invented years after the event.  It is a lie. The evidence as researched and presented by my guests on Friday expose this lie and others.

Truth will win. One person awakens at a time. The awakening can be slow and tentative. But it happens. It happens when awakened people bear witness to truth.  People like Hugh Turley, David Martin, and Matthew Fox.

As the 50th anniversary of the murder of one of the most significant spiritual leaders of the 20th century approaches, this truth needs to be heard. Those who suppress the truth are many and wily. But they are not all-powerful.

I highly recommend their book. It is meticulous. For a summary you can read in a few minutes, read What We Know About Thomas Merton's Death.

His death was not mysterious. It was murder.

Thomas Merton and the truth he expressed throughout his 53 years summon our courage to awaken and bear witness.