Peeps in the News


The Johnson City Press has featured a couple of FPC Elizabethton folks in the news. They are not in the news because they are FPCE peeps. They are doing good deeds all by themselves. I take the opportunity to drop names whenever I can. It is "proud of my peeps" day. 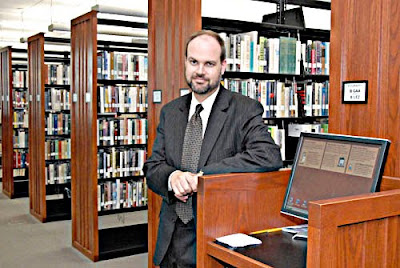 Bob Swanay is the director of the Johnson City Public Library. Folks are swarming to the place. Why is that, Bob?

“The library is a safety net during times tough economic times like this,” he said. “People know they can use our resources for job searches. As they research, they sometimes encounter a wide range of information that may help them enter into a new career.”

The demand for computer use also has increased sharply, largely due to the fact that many times it is the only option for researching career opportunities and filling out job applications. Also, the offerings available on the library’s website include a wealth of information and links that open portals to a shared library system, Heritage Quest, World Book Online and access to a number of online programs.

In 2009, the library’s website registered 1.5 million hits, and that number is only expected to rise. And all the increases have been most pronounced over the last three years, about the same length of time the country’s economy has been on a downhill slope.

“People are feeling the effects of the slowing economy and have a little extra incentive to come in,” Swanay said. “Part of our strategic plan includes the creation of a career center with more emphasis on providing information on job searches.

“Another factor is that when you’re pinching pennies, you’re looking for a cheap form of entertainment. We have lots of programs for children that keeps them engaged. DVDs are very popular. We’re not Blockbuster, but we do dabble in popular materials. We’re trying to strike a balance between entertainment and education.” 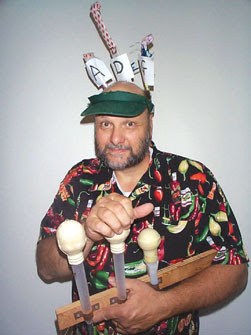 Another FPCE peep is Jim Miller. He was featured in Sunday's (April 11th) JC Press.


Music is more than a hobby for Hampton’s Jim Miller, or even a profession. Heck, he’s made it a way of life.

Miller doesn’t just listen to music like most of us do. He hears it in his head, in his sleep, all around him. He plays various kinds of music on numerous instruments, performing and making recordings. He teaches music to students of all ages and leads jam sessions.

For years, Miller was a maker of fine hammer dulcimers. He even invents instruments, using everyday items like turkey basters, a drill, a bicycle wheel or a DustBuster to make music.

“Anything you can get a pitch off of, I’m all for it,” he said with a laugh. “The wackier the better.”

At one point, he said, “I was jamming down” by plucking on a cable used to crank open a camper. It made for some good bass notes.

Why so much music?

“It’s a universal language,” he said. “Every culture has music. It’s a great way to express yourself. If you play oldtime music, you can go anywhere in the world and if you find an old-time banjo player you can play with him. It’s a real camaraderie.”