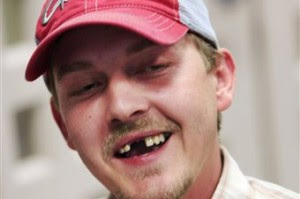 What do you think will happen to this man?

He just won the jackpot of 258 million dollars.


Here is the story:

JEFFERSON CITY, Mo. (AP) — A Missouri man who won a $258 million Powerball jackpot and plans to use some of the money to pay bills, replace his two missing front teeth and take his children to Disney World said he hasn't decided yet if he'll quit his job at the convenience store where he bought the winning ticket.

Chris Shaw — a 29-year-old tattooed father of three who was raised by his grandparents in rural southern Missouri — came forward Thursday as the winner of the 10th-largest Powerball jackpot ever. Shaw said he had just $28.96 in his bank account and recently bought a 1998 Ford Ranger from a friend who agreed to let him pay off the $1,000 price $100 at a time. Now, he said, he no longer has to worry about how he'll pay his friend — or his utility bills.

"We didn't come from money. For us it's just going to be a huge relief to know I'm going to be able to pay my electric bill, my gas bill," Shaw told the Associated Press. "It's like a weight lifted. I had bills at home I didn't know how they were going to be paid."

Shaw said he bought the $5 ticket Wednesday at the Break Time convenience store where he works in Marshall, a central Missouri town about 80 miles east of Kansas City. He accepted his ceremonial check at the Missouri Lottery headquarters in Jefferson City wearing a tan and red plaid shirt, a red hat and a huge grin — minus two front teeth he says he lost because he didn't take care of them but can now afford to have replaced.

"I'm just a regular guy working paycheck to paycheck ... well not any more," he said.

Shaw said he needed a few days to decide whether he will keep his minimum-wage job at the store where he has worked for just three weeks. He also plans to seek advice "from people who know about money" about whether to take the jackpot in 30 payments over 29 years or the lump-sum amount of $124,875,122.

"He's just a great guy, a good employee. When you think of a large winner like this, everyone likes to see that the person who won is somebody like Chris," she said in a telephone interview with The Associated Press.

Shaw — who has a 10-year-old son, a 7-year-old girl and a 5-year-old girl by two different women — said he had played Missouri Scratchers lottery tickets before, winning at most $80. He checked his Powerball ticket against the state lottery's website only after his girlfriend, Tosha Ewry, told him the winning ticket was bought at the store where he works.

When Shaw called Ewry back to tell her the news, she thought he was joking, he said. Finally, he said he told her: "I swear on a stack of Bibles, you need to leave work and come home."

Shaw said he looks forward to spending more time with his kids, who live with their mothers about 240 miles southeast of him in his hometown of Alton, as well as with his girlfriend's two sons — 13-year-old and 15-year-old boys Shaw says he considers his own. He plans to take them all to Disney World in Florida.

"I can be with them as much as I want now," Shaw said.

He said his children already have been asking for new skateboards, bicycles and "just stuff that's really hard to do when you make $7.25 an hour."

Can you imagine how this would change his life? Think of all the advice he is receiving and all of the requests and expectations from his extended family, friends, and neighbors. How will he handle the envy? Could he really live in the same town with everyone constantly harassing him, talking about him (and his family), demanding from him? Do rags to riches stories ever turn out well? What would you do?
Posted by John Shuck at 4/23/2010 07:27:00 AM