Peace Is Every Step--A Sermon

Peace Is Every Step
John Shuck

“I tell you, don’t react violently against the one who is evil:
when someone slaps you on the right cheek, turn the other as well.”

“If someone is determined to sue you for your coat,
give that person the shirt off your back to go with it.”

“When anyone conscripts you for one mile of service,
go along a second mile.”

"The concept spread very slowly at the start. People did not give it a whole lot of thought. It was during the Second World War that the spirit caught hold, because we were trying to hold the world together. World Wide Communion symbolized the effort to hold things together, in a spiritual sense. It emphasized that we are one in the Spirit and the Gospel of Jesus Christ."

The Presbyterian Peacemaking Program chose World Communion Sunday as the day to emphasize world peace and to receive a special offering, the Peacemaking Offering, to encourage the church at all levels to engage in acts of peacemaking.

This week our presbytery is participating in the International Peacemakers program. We have a visitor from the Democractic Republic of the Congo. He is Rev. Augustin Mukendi. He will be here Monday night at 7 p.m. to share with us what is happening in his part of the world. 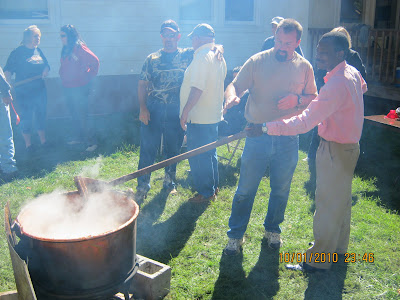 I had the opportunity to spend yesterday with him. We went to Magill Memorial Church in Roan Mountain and watched them make apple butter, enjoyed lunch, and then I took him to Carver’s Gap.

Augustin and I walked up to Round Bald. I think he was impressed with that. It was a beautiful day. You could see a long way. 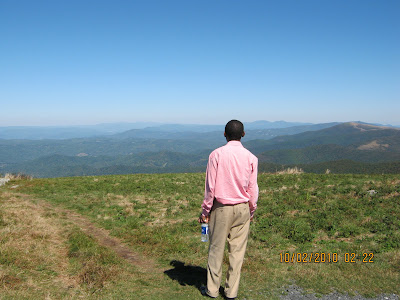 I asked him what his message is to Americans. What message does he want to communicate this week with us? He said that the message is that we are one. We are one world community. He also said that it is important for Americans to learn about other people around the world and who they are and what they are doing. He didn’t mean to be critical when he said this, but he said that the world knows what America is doing. But Americans don’t often know what the rest of the world is doing.

That is certainly true. We cannot do the things that make for peace if we don’t know our neighbors. We make a big footprint around the world and the products that we use have costs of which we are often unaware. For instance, some of the minerals (tin, tantalum, tungsten, and gold) that are mined and refined for our cell phones, I-pods, and other electronics, come from the Democratic Republic of the Congo. OK. Except that in the words of this article:

A horrific war has raged on in the Congo since 1994, killing an estimated 5 million people and earning the nation the moniker "the rape capital of the world." The persons responsible for this brutality and abuse are financing themselves through the extraction of these minerals.

“thousands of U.S. companies to disclose what steps they are taking to ensure that their products — including laptops, cell phones, and medical devices — do not contain "conflict minerals" from the Democratic Republic of the Congo.”

Credit for awareness of the situation and activism toward enacting this legislation goes in part to the Presbyterian Peacemaking Program. The folks at the Peacemaking Program and the UN Office have been trying to communicate this to us for some time now. Part of the calling of being peacemakers is being aware of the hidden costs (not just money and energy, but ecology, and human life) associated with what we take for granted and consume on a daily basis.

World Communion Sunday is a day to be reminded that we are interconnected.

The phone call I make on my cell phone is connected to someone’s life in the Congo.

The light I use to read by at night is connected to someone who lives near a mountain top removal strip mining operation in West Virginia.

The hamburger I eat is related to a factory farm in California which may or may not be the most just and humane use of food energy.

The point of this is not to get bummed out about every possible thing we do. The simple point is to reiterate what our peacemaker of the Congo said to me yesterday: 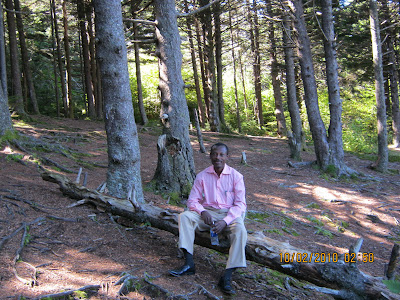 the world knows what America is doing. Americans do not often know what the world is doing.

We don’t know because we are intentionally kept in the dark. It takes a lot of energy to keep us dumb and docile. It requires a great deal of spectacle, advertising, and info-tainment to keep us from looking behind the curtain. Because if we did look behind the curtain we might be repulsed at what we see and demand change.

Now there is such a thing as compassion fatigue. We can only take so much before we tune out. If we attempt to carry the weight of the world on our shoulders we will be crushed by it. So we have to carefully pick our battles, address those things that are most important to us, always have (even if it seems very small) a concrete action to take, and walk our path for peace one step at a time. Peace is every step, as Thich Nhat Hanh reminds us.

And perhaps most importantly, to remember through prayer and ritual that God is big, as Rev. Mukendi said when he saw the beauty of Appalachia from atop Round Bald. To use Christian words (which when used correctly is a particular symbol for the universal) Christ is our peace.

God is big. Christ is our peace.

We participate in peace when we penetrate barriers.

Jesus reminded us to love our enemies. He told us to turn the other cheek, go the second mile, and offer our shirt when they take our coat. Jesus was not advocating passivity. In all three cases he is speaking to those who were abused and humiliated to respond to abuse in ways that do not return evil for evil, but do not accept evil passively. Instead each of these actions is intended to assert one’s dignity.

Walter Wink, in his book Engaging the Powers has helped us to understand these puzzling statements by putting them in context. He writes that each of them is a strategy of responding to evil by disarming it.

If a superior backhands an inferior with the back of the right hand striking the right cheek, the person struck could do a couple of things. Strike back which would be suicide or look down and be humiliated. Turn the other cheek would do something different. In this non-verbal communication the person struck is saying,

The second mile refers to a soldier who was prohibited by Roman law of requiring a peasant to carry his pack for more than one mile. So if a soldier tells you to carry the pack for one mile, don’t resist. You’ll just get beaten for that or worse. Don’t be humiliated. Offer to carry it two miles. Now you have put the soldier on the defensive. You are causing him to break the law. Now he has to wrest his pack back from you.

In the case of the coat, it is really an outer garment and an inner garment. You could take a person’s outer garment in lieu of payment on a debt. The law stated that you must give it back at night so the person would not freeze. So when humiliated by having your outer garment taken, the third way of resistance is to take off your inner garment and hand it over as well. What are you then? Naked. The idea here is to show the world the injustice being done.

Walter Wink suggested that these activities were not meant to be understood as passively receiving evil and humiliation from another. They were instead creative attempts to expose the injustice of the relationship and forcing the oppressor to see the humanity of the person humiliated.

You will see me as a person.

That is the purpose of non-violent resistance. The point is to expose the injustice. The point is to show the oppressor and the world the injustice of the relationship and ultimately to disarm the oppressor. You don’t love the enemy because you have some kind of masochistic tendency. You love the enemy in order to change the relationship. You love because hate makes you the monster you are trying to disarm. You love because you are seeking to move from labels that de-personalize and de-humanize to one of equal relationship: I – Thou.

That of course is the meaning of peacemaking and the meaning of world communion.
Thou art that. That is what John Martin is attempting to tell us with his study of Joseph Campbell’s book by that name. Come tonight to that study.

Thou art that.
You and I are each other.

That is what is being said here.

The philosopher Schopenhauer understood Thou Art That or I – Thou in this way.

“...so that the other was no longer perceived as an indifferent stranger but as a person “in whom I suffer, in spite of the fact that his skin does not enfold my nerves.” Joseph Campbell Thou Art That, p. xii.

That is compassion. That is what makes us human.

I ultimately have great hope for humanity and for Earth.

I know I sound apocalyptic now and then about our future.

That is because I do not trust our economy, our politics, our technology, or our ideology (or anyone else’s for that matter). I do believe we are in the midst of major change.

But I believe in, I trust in, the I – Thou
in the Thou Are That
in the Communion of Saints,
in the compassion we humans have for one another when we allow barriers to be penetrated.

At the table we become aware that we are one. When you suffer, I suffer. Regardless of our creed or metaphor, The Divine Spirit, Buddhahood, Allah, the Cosmic Christ, is within each of us.

It will be kindness and compassion that will carry us through.

Let us Celebrate Christ, Our Peace.