We call it "Science And Religion" this conversation or, at times, contest.   I think the two terms are loaded and imprecise.   I hear people say that science can't explain everything.  I don't disagree, but I am not sure what they mean by saying that.   I don't know if the terms are science and religion so much as knowledge and meaning.

The broader meaning of science is public knowledge.   What can we know about the universe and how do we know it and how do we communicate with each other about it?   This public knowledge is available to anyone who can develop the skills and learn how to use the tools.   An assertion to be valid must be able to be proved wrong.   This knowledge builds and corrects itself.

Religion, or its new cousin, spirituality, traditionally has been based on special revelation or private revelation.  You go to the cave and a supernatural being gives you the meaning of the world.  You take it on faith.  For those of us who didn't get called to the cave, we are required to trust the messenger.    The Bible, Qur'an, or a contemporary spiritualist provides answers that are not able to be disproved.

I find this understanding of religion to be problematic.   It does nothing to advance public knowledge or meaning.  It is simply a matter of power.  If you cannot make a reasonable argument that can withstand the critique of public knowledge, then attempt to speak for God and require that people trust you.  Thankfully, this notion of religion (and "spirituality") is being exposed for its fraudulent claims.

Religion is no longer legitimate as a depository for special revelation.  If it has anything to say about the natural world and its meaning for us, then we can use public knowledge to test its claims.   If it tries to protect its claims from a public test, then it has no legitimacy.

When someone says to me that science cannot explain everything, I ask what the alternative might be.  Outside of public knowledge, what can be explained and how is it done?  If the answer is some version of "the gods told me" I call it either delusion, wishful thinking, or abuse of power.   I trust no one whose claims cannot be tested.

I think it is time to do away with any claim to special revelation.  This goes for our texts and creeds.   They are products of a time that relied on special revelation to answer life's questions.  This method has proven to be inadequate to describe the universe.    Instead I advocate that religion fully embrace the principles of public knowledge and devote itself to making life meaningful in a public way.

What can religion be and what is its role?  I think the task of religion is to further the possibility of survival of the human species and to preserve our ecosystem for future generations. It is time to embrace the story of the universe that we are learning via public knowledge and work within that story to inspire a meaningful present and future for human beings.

Some may argue that for them, religion and/or spirituality is about escaping this universe.  They may suggest that their identity is outside of it and the purpose of life is to transcend their earthly existence via immortal souls and what have you.  I have no argument.  What argument can possibly be given?  This is private revelation and folks are welcome to it.  I have no interest in it and find no value in it for our public life (except that I think it is in our public interest to respect the freedom of private belief).

I think religion has so much more to offer than private or special revelation or speculation about matters that cannot be disproved.  We are in a unique and perilous position.   Humans have stretched Earth's limits to their breaking point.  We are not living sustainably.   Human beings may become extinct.   Earth will spin for 100s of millions of years whether humans are on board or not.

The amazing thing is that the universe has evolved consciousness.   We are it.  We are literally the universe's eyes, ears, and thoughts.   That is valuable.  Far more valuable than we may realize.  It is worth preserving.   We have a great work at hand and that is to survive.  We need the best of ourselves.   We need to tell the story of the universe that we are learning through public knowledge and we need to work together to find meaningful images and metaphors that will inspire us to do this courageous work.  That, to me, is religion. 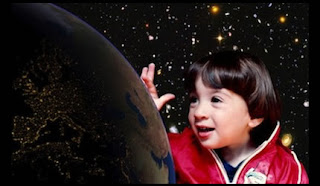 I make this post in gratitude to two people who I think will be the inspiration to many, Nancy Ellen Abrams and Joel Primack.  Check out their book, The New Universe and the Human Future:  How a Shared Cosmology Can Transform the World.     I will give them the last word:

What would it take, and mean, for Earth's citizens to become a cosmic society, a society capable of thinking in, and acting for, the extremely long term? The possibility of becoming a cosmic society may seem abstract, even pie-in-the-sky silly right now -- but in fact, it may only be possible now. There may be freedoms and resources available today that in a generation or two will disappear unless changes occur. How can we seize this opportunity? How can we help the world's people to recognize that the new cosmos is everyone's home, its origin story is everyone's story, and that sharing the unique place of intelligent life in this universe is a bond that unites us all?

Our goal in this book and this website is to inspire readers to imagine what a cosmic society that accepts and lives by the new cosmological concepts could become, and to start becoming it. We believe this may be humanity's best chance for a very long and successful future. And our best chance for infusing today with the hope and optimism necessary to get there.