Janet and Me to Rule General Assembly

After nearly twenty years in the ministry, I finally get to go to the PC(USA) General Assembly.

The LayMAN broke the story.


Shuck has been elected by Holston Presbytery to serve as a voting commissioner to the PCUSA’s 2012 General Assembly.


That is the truth.  Even though there may be a thousand other commissioners (or however many there are) what is important is that I am going.  As we all know Beloveds, it is all about me.

Well it is about me and Janet.


Shuck is not alone. At the General Assembly, he will find allies who are equally dismissive of God’s Word. The Rev. Janet Edwards, a self-identified “bisexual” whose officiating at lesbian wedding ceremonies have made the news in recent years, will also be there as a voting commissioner, promoting her bid to become moderator of the General Assembly.

Me and Janet the bisexual are going to occupy GA.   Because of that...


Biblically faithful Presbyterians by the tens of thousands are heading for the exit. That massive migration has so seriously enervated the few evangelical Christians remaining that Edwards may now campaign for the once-esteemed office of moderator while Shuck parades with impunity his unbelief.

I couldn't pay an advertising company to create a better endorsement.  Thank you, Parker!   He is my SuperPac Daddy!   Janet and I also received endorsements from his disciples:


"I am always amazed that leaders such as John Shuck are permitted to continue to minister within the PCUSA with their heretical teachings."  Rev. Soto

I am amazed too now and again.  But not all are amazed:

I cannot believe that anyone is surprised by the heresy and apostasy running absolutely rampant in the PCUSA.  With enormous hubris and arrogance, Shuck has been trumpeting his heresy in his blog and pulpit for years, aided and abetted by fellow travelers and non-believers in his "congregation" and his presbytery.

"That he and Edwards ("... who calls herself a prophetess. By her teaching she misleads my servants into sexual immorality...") and others like them will be allowed to pollute and poison the processes and activities of the upcoming GA, and is a completely foreseeable result of the capture of our hierarchy by liberal progressives who are hostile to, and dismissive of, the Word of God.  The orthodox believers remaining in this denomination should be prepared for even more apostasy in July.  Shame on Pittsburgh and Holston for even sending these people to GA."  Rev. Yearsley

There you have it.

But you don't know the latest.   Janet is "standing for moderator" for GA.  What that means is that all the candidates for moderator stand there and the one who pulls the sword from the stone gets to be queen.   I am certain that Janet, as prophetess and anointed bisexual, will receive this divine honor.

When Janet becomes Queen of Presbyteriandom she will in turn, crown me as Duke. 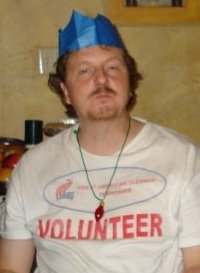 I already have the hat.

Together we will parade with impunity and pollute and poison the General Assembly with apostasy.

Here is our platform:

Free ice cream for everyone every Friday.

We learned our lesson from history.  It is not enough to let them eat cake as the fated Marie Antoinette learned too late.