The Relational Trinity and The Human Community--Bob

(Conversations with Bob! Join us for Virtual Sunday School!)

I said in my last post that one of the problems in talking about the Trinity is that sometimes the metaphors we use lean towards threeness and sometimes lean toward oneness. This post will lean toward the threeness end. 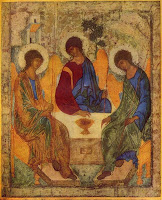 I’ve said that one of the metaphors for the Trinity that comes from our Easter Orthodox brothers and sisters is the metaphor of the Trinity as relational or community. In the words of Kallistos Ware:

God is not just self love but shared love. God is a triunity of persons loving each other and in that shared love the persons are totally “oned” without thereby losing their personal individuality . . . God is not just personal but interpersonal not just a unit but a union. God is social or dialogic; there is within him a timeless dialogue. From all eternity the First Person addresses the Second, “Thou art my beloved Son.” (Mk 1:11) From all eternity the Second replies to the First, “Abba Father; Abba, Father.” (Rom. ; Gal. 4:6) From all eternity the Holy Spirit “who proceeds from the Father and rests on the Son” sets the seal upon this interchange of love. It is this timeless dialogue that is movingly depicted in St. Andrew Rubelev’s icon, which shows the Trinity in the form of the three angels who visited Abraham (see Gen. 18:1-6). The three angels in the icon are not just gazing out into space or looking at us but they are looking at one another. Joining the three together – marked out through the inclination of their heads, and the lines of their shoulders legs and feet – there is in the icon an enfolding circle, the great O of love.[i]

When we see the Trinity as loving community and fellowship we also see one of the fundamental parts of the image of God in humans. God created us for community. We image God when we live together in loving peaceful community.

Is the doctrine of the Trinity practical? I mean by this does the doctrine have implications that should, (indeed must) affect the way Christians live? Ware asks these questions at the beginning of his article: “What practical difference does the threefoldness of the one God make to us most of the time? Can we say in all sincerity that it has a drastic affect on our understanding of human personhood, of society and politics?”[ii] I suggest that if the doctrine of the Trinity is nothing but philosophical speculation it is meaningless and should be abandoned. But the doctrine does have practical effects. In a later blog I will talk about the effects of the doctrine on salvation. Here I will focus on the implications of God as community imaged in humans, creating the human community.

If imaging the Triune God means being in loving community with all other humans, as I suggest that it does, then how we treat other human beings is vital. As we look at another human being we should see not just a person but the image of God. We should see a partner in the human community. Notice I do not say that this community is limited to the Church. Since all humans are created in the image of God, no matter how damaged and broken that image may be through sin, all humans still are created in God’s image and therefore part of the human community.

I believe this doctrine, if correctly applied, has several important ethical implications:

The list of human sins against other humans is tragically long. If the persons of the Trinity exist in an eternal fellowship of love and if at least part of the image of God in humans is to reflect that love, then how we treat each other is vitally important.

The Triune God is, from one perspective, a loving fellowship. May we so image God that we are the same.