(Conversations with Bob! Bob wraps up his faith/life story!) 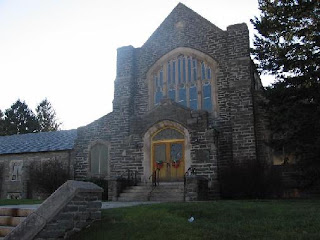 I became the pastor of Tully Memorial Presbyterian Church in Sharon Hill, PA in January of 2005.

Sharon Hill is one of the boroughs in the first circle of suburbs around Philadelphia. The city of Philly line is about 3 miles from my house. And that part of Philly is the ghetto.

Neither Sharon Hill nor Tully Memorial is very old. This was farm land until the late 1800’s. The Borough of Sharon Hill was incorporated in 1890. The Church was established in late 1908. Come to think of it, this is the youngest congregation I have ever served!

Sharon Hill has become a racially mixed community over the last 20 years or so. Curiously it avoided white flight. The town is made up of mostly row houses and double houses. Many people moved here to get out of the city over the years, including the African American families who moved in during the last 20 years.

Tully Memorial is an elderly congregation with the average age over 70 years old. There are currently 68 members on the roll. The Sanctuary seats 300. Unlike many urban congregations most of the members of Tully still live either in Sharon Hill or within 5 miles of the church.

So how does the congregation survive? Members left money to the church in their wills. Besides the offering the congregation brings in a decent return on its investments. That’s how we afford a full time pastor, namely me.

I started by hoping that we would be able to reach out to the neighborhood and become a multiethnic congregation. This has proved more difficult than I thought it would be. We need to begin some community outreach, which I hope to begin working on this winter.

I have taught 3 Kerygma classes since I’ve been here, The Lord’s Prayer, Halleluiah, on Handel’s Messiah, and am currently teaching Bible Introduction. I’ve also started a small group Bible study.

We’ve lost members, mostly to death since I’ve been here. Soon we will have a small new members’ class join the church, including an immigrant from Africa.

1. That Jesus Christ alone is Lord of all and the way of salvation.

2. That Holy Scripture is the Triune God's revealed Word, the Church's only infallible rule of faith and life.

3. That God's people are called to holiness in all aspects of life. This includes honoring the sanctity of marriage between a man and a woman, the only relationship within which sexual activity is appropriate.

I can’t say that we have made any great progress since I’ve been here. But I can tell you a few things that have happened.

1. My wife got elected and ordained as an elder in 2006. This has been an interesting and sometimes humbling experience for me. Debby has no problem disagreeing with me at Session meetings. The rest of the Session thinks this is funny and cheers her on. Unfortunately for my ego she is usually right more often than I am!

2. We rewrote the bylaws of the congregation and the corporation, no mean feat, and something that needed to be done. What surprised me was the number of people who read the proposed bylaws word for word. One member, who just turned 90, called me up and pointed out that one could no longer call an emergency Session meeting by telegraph because Western Union has stopped the telegraph business. She suggested we substitute email in place of telegraphs.

3. I have become much freer in my expression of political opinions from the pulpit. I don’t tell people who to vote for but I’ve had no problem telling people that the war in Iraq was a stupid idea and that taking care of God’s good creation is our responsibility, including decisions about what fertilizer or weed killer to put on your lawn.

How have I changed and what has God done in my life? My meds put me on a more even keel so I get angry less often. I’ve been more involved in Evangelical groups and feel more comfortable in the presbytery as Philadelphia Presbytery is theologically closer to where I am than any presbytery I’ve been in before. I’ve been reading, books on Islam, various viewpoints on homosexuality, translations of the Dead Sea Scrolls and of non-canonical books and stuff on archeology.

God still feels distant. I wonder sometimes if the meds I take have something to do with that. But I still believe that God is present no matter what I feel. I see God in the children who play next door in the park, in the people who come to the church seeking financial help, and the deep, deep faith of elderly people who know they are near the end of life and depend on God every day. One of my members says that every morning she wakes up and says, “Thank you God for another day. Now can you please help me get out of bed?”

My great hope is that we can reach out to the community and become a truly multiethnic congregation. Time will tell.

So John, you want to talk about essentials? I see theological and missiological essentials as intimately related. You choose the topic and we can talk about it!