Monkey Muck has more pics and story in his excellent report, This is What Democracy Looks Like, Part 2! Read Part 1 first!


Here is the account in The Johnson City Press with more great pics! 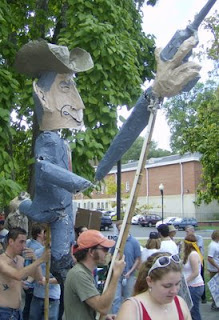 The Star of the show was a GW Bush puppet complete with six-gun and money bag! The guy with the red cap was his creator!

As promised, here is the text of my speech. It is a lot better heard than read.

To liven it up, I have interspersed it with pictures Monkey Muck took at the march and rally. At some point, I think there will be a website that will have audio for the speeches. 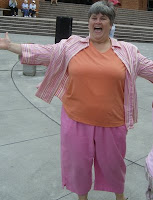 Thank you, Sandra. Thank you for your tireless energetic persistent work for peace. Thank you for providing this forum in which our voices may be heard.

Thanks to all of you for being here today. It is good to see you. More importantly, it is good to hear you!

You are in good voice this afternoon!

If there is one message I hope to make clear today, it is this: 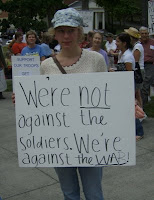 Your voice has power!

Your voice has power, but only when it is used.

But you can use your voice only when you feel that you have no other choice. There is a phrase for those who are going through recovery: 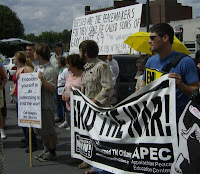 We will only change when we realize that the pain of remaining the same is greater than the pain of change.

We will only use our voices for peace and justice when we finally realize that it is too painful not to speak out. 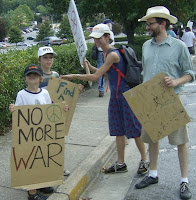 There is pain in speaking out. I can think of a lot of things to do with my Saturday. I am sure that you can as well. I don’t want to anger people who may disagree with me. I don’t want to put myself at risk.

But I have reached the point where it is too painful not do so!

Have you reached that point yet? Are you sick enough of our situation to speak out? Have we realized yet that we are addicted to a way of living that is killing Earth?

Before I came to my current church, I had to fill out a resume with a number of questions. One of the questions read: “What your most important theological question?”

What will the world be like when entering freshmen at ETSU are my age or your age? What kind of world are we leaving them? What kind of vision do we have? 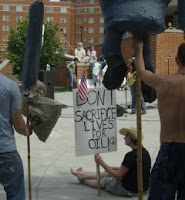 How sick are we? Here is how sick and addicted we are:

The United States makes up four percent of the world's population. The consumes 25% of the world’s oil. 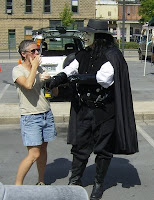 If every human being on Earth lived the lifestyle of the average American, we would need four planets worth of resources to sustain us. Four planets worth. We have one planet.

The neocons know this. Cheney, Wolfowitz and the gang. They know this reality. They further believe that Americans cannot possibly give up their way of living. “The of Life,” said George Bush, Sr. “is non-negotiable.”

The neocons have a vision. It is the vision of Empire.

Here is their vision statement from the Project for the New American Century:

The Project for the New American Century is a non-profit educational organization dedicated to a few fundamental propositions:

that American leadership is good both for America and for the world; and that such leadership requires military strength, diplomatic energy and commitment to moral principle.

Notice the word, “moral.” Moral is a code word for being blessed by God. We Americans are better people than those who live in other countries. So they need our protection, our benevolence, and most importantly our military presence. 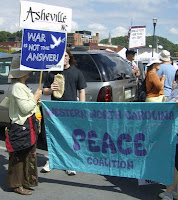 We have a military presence. We spend more on our military than the next 20 nations combined. The has over 700 military bases 130 countries. I am not sure I can even name 130 countries. That is Empire.

Just last week, the mainstream press reported that another base is being constructed in on the Iranian border. 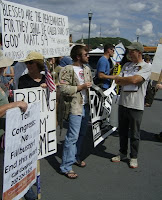 We are told that progress is being made in . Be patient, we will win. We are making the world safe for democracy. Meanwhile more and more die, and there is no end in sight.

In the time of Jesus, the Romans thought they were divinely inspired. Virgil in his Aeneid “claims that the divinely willed destiny of Aenas is to ‘bring all the world beneath his laws’ in order that ‘glorious shall extend her empire to earth’s ends, her ambitions to the skies.’

will rule because is good and blessed by the gods. 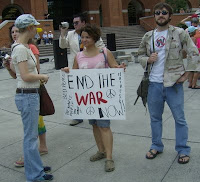 Octavian, who united Empire just a few decades before the birth of Jesus was divinized. He became the Divine Augustus Caesar who brought peace to and quiet to the provinces.

Jesus experienced that “peace.” He knew that peace for the elite of meant violence and oppression for the poor. It was peace for the few at the expense of the many.

Jesus was executed by Empire. What does it mean for us to follow Jesus when we live in an Empire? 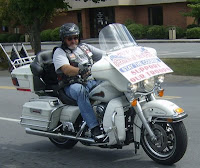 It means, like Jesus, we must use our voices. When we do, we will be met with opposition. We must respond to opposition with resistance. We must resist with the power of nonviolence.

Yet Jesus has been shackled by the neocons and by Christian dominionists who want to equate the Christian faith with the American Empire.

A friend of mine, Doug Hagler, a seminary student, wrote the following reflection.

“You have heard that it was said, ‘Love your neighbor and hate your enemy.’ But I tell you: Love your enemies and pray for those who persecute you (Matthew 5:43-44).

Here is how the Christianity of Empire has decided to interpret these words from Jesus: 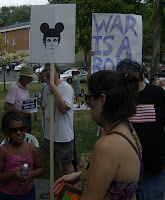 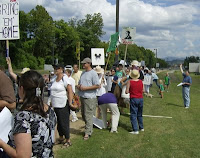 With so much love
with so many prayers
how can we possibly be wrong?

When in the prophet Isaiah’s time, the powers of Empire were expanding their kingdom, making progress, and justifying it by being moral and godly, the prophet stood up and he used his voice:

Ah, you who join house to house,
who add field to field,
until there is room for no one but you,
and you are left to live alone
in the midst of the land!

He could have been speaking to us. 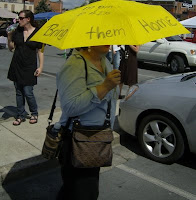 He could have been speaking to Empire builders, who believed wrongly that peace is the product of war. The vision of Empire is patriotically packaged and religiously legitimated.

This war is wrong. This war was and still is illegal, immoral, and unjust.
It has cost the people of Earth tens of thousands perhaps hundreds of thousands of lives, Nearly ½ of a trillion dollars. And it has cost its soul. 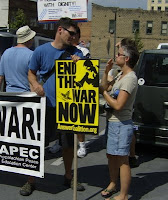 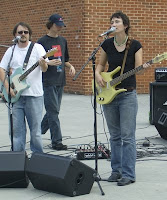 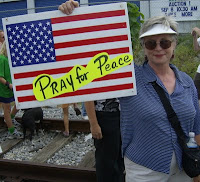