The Church and The Hospital--Bob

If you have been following Conversations with Bob you know I have Bipolar Disorder. It doesn’t usually get diagnosed as the first problem. I’d had problems with anxiety and depression since I was a teenager. But in things took a different spin. First Pres Titusville, (I have now been pastor at 3 1st Presbyterian Churches, all with no 2nd Presbyterian Church in town), is a great church. There was a bit more conflict there than I expected but all in all they are good people and a good congregation.

had mixed worship. That meant that we had some good old organ music with traditional hymns and also some contemporary music with guitars and an electric piano. (My first question was, “Where are the drums?” I was told the congregation wasn’t ready for drums.) Later we added a midweek contemporary service.

is a very small river town near . If you walk out the front door of the church and across the street the ground drops off rather dramatically down to the . And yes, the floods. Fortunately the church and the manse are on high ground. Also in town is the NJ side of . Every year on Christmas re-enactors come and cross the .

The congregation was starting the Alpha Program when I arrived. It is a really good program for leading people to faith in Christ and also in basic Christianity. You invite people to come to just one class, with free food and fellowship, and they usually stick around for the whole program. There is dinner, some singing, a talk on an aspect of Christianity, (you can use the videos with this crazy English pastor named Nickey Gumbel) and a time for small group discussions. All questions and comments are acceptable! Not to be missed is the Holy Spirit weekend. The nice part was that almost the entire program was congregation led. I started off as a guest in the first program and then moved to helping in the kitchen. I also taught a class on spiritual gifts on the Holy Spirit weekend.

In some ways was ideal. The kids were both off at college and Debby and I both got involved in the congregation. The problem was I really hadn’t gotten over my anger about being kicked out of 1st and it affected my ministry. More, it affected my mental stability.

To put it simply, Bipolar Disorder is a mix of depression and mania. It all has to do with messed up brain chemistry and the interaction between life and brain chemistry. I was used to being depressed and anxious. I had never recognized the low level mania before. I started to drink, spent too much money, and said whatever came to mind. Fortunately, or maybe unfortunately for Debby I tended to say whatever came to mind to her and not to people in general. It all came to a head in November, 2003 when I went into a massive depression and went into the hospital.

My other complaint is what hospitals do with those of us who have brain chemistry disorders. Most medications that affect brain chemistry take about a month to take effect. Insurance companies allow about 10 days in the hospital, no where near enough time for the medicine to work.

My time in the hospital actually, after I got over a massive panic attack, was actually not bad. There were a variety of people there with Bipolar Disorder and they are some of the smartest, kindest people I know – when they aren’t on a massive mania or unbearably depressed. There were a few people my age there and we became friends and talked about everything. The doctors changed my medications and I went home. Too early, of course.

I went into an outpatient program that actually was helpful. But I wasn’t ready to go back into ministry. Not for a long time.

I went into temporary disability. In the PCUSA this means you have to resign as pastor of your congregation, which I did. I moved out of the manse and into an apartment and tried to fill my days. The medications helped, kind of. I didn’t get too bored because I slept from to 15 hours a day. I got out and got some exercise. I even helped the presbytery start a group for pastors with mental and emotional disorders. It probably won’t surprise you pastors out there that I was the only one who went to the group. We pastors don’t dare be seen as crazy. That’s a career killer. I had a few people in mind in the presbytery that I thought needed the group but I kept my big mouth shut. BTW, do you know that somewhere near 60% of pastors in the have some sort of emotional disorder and that a whole bunch comes from abusive homes? It shouldn’t be a real surprise. After all a lot of people in helping professions sign up because they are self diagnosing.

Anyway. Over the summer my parents flew in to PA and I drove to my mother’s hometown. My great aunt needed to move to a nursing home and we had to sell the family homestead.

And where was God in all of this? Well, I’m alive. I could have committed suicide. I discovered that God is there even in the midst of the deepest depression. I also discovered that faith is not feeling the presence of God in the midst of deep depression and believing God is present anyway. I’ve discovered something terribly freeing about being openly crazy . . . um, I mean a person with a brain chemistry disorder. There are a whole lot more congregational members out there with emotional and mental disorders than you would ever believe. They talk with me because they know I know what they are going through. 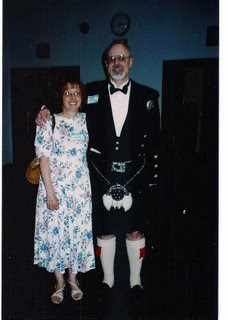 Oh! I forgot to mention, while in I got into my ancestry and all things Scottish. I’m a kilt wearing pastor, although I still wear pants most of the time. My children are embarrassed to be seen with me in a kilt.

My wife just accepts that it’s me. Have I said I really love my wife? She doesn’t put up with me wearing the bonnet. The bonnet is too much for her. Anyway, that’s why there is a picture of me in full dress kilt at the top of the page. You Can’t see the plain because the picture is too dark but that’s Black Watch, the original plaid.

Fall came and I felt well enough to circulate my dossier. Actually in the PCUSA it’s called a Pastoral Information Form or a PIF. Churches looking for pastors have similar forms called Church Information Forms, a CIF. It used to be done on paper but now you can download them. Still Pastor Nominating Committees print them out and hand them out to their members. Sometimes I think the motto of the Presbyterian Church should be “Kill a Tree for Jesus.”

As you might imagine it’s slim pickings out there for pastors on disability with a mental problem. Nevertheless this friendly church in suburban offered me a call: Tully Memorial Presbyterian Church.

Next Time: Tully and my present life.