North Carolina voted against marriage equality by about a 60-40 margin yesterday.   As you can imagine, religion played a role. 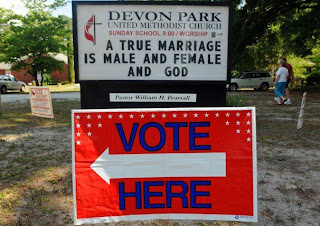 Add in female slaves, female booty captured in battle, and your cousin, and you're getting close to being biblical.

Yes, this is all backward and worthy of mocking, but note this.  Just a few days ago More Light Presbyterians reported in A Sea Change In Support for Marriage Equality that according to the Pew Research Center, in 2004, 31% of the U.S. population supported marriage equality and 60% were opposed.   Today 47% are in favor and 43% oppose.   Even the president knows the numbers.

North Carolina is a few years behind the times, that's all.  It took all of the religious bluster they could muster, including dragging out poor old Billy Graham to blather nonsense for them to get to the position where the whole nation was eight years ago.

I am not saying jump up and cheer.  This was a bad day for equality.  This amendment wasn't even necessary to prevent gays from marrying.  It was pure meanness.   Yet in perspective, and we should keep perspective, marriage equality will become reality, even in North Carolina.