A Bullet Point in PCUSA History

A handful of fundamentalist congregations in my denomination are agitated.   They are agitated, stirred and shaken by their leadership who want to move their churches out of the PC(USA) and take the PC(USA)'s property with them.   To make the case, these leaders present papers and put them on their congregations' websites.  These papers are designed to tell the sordid tale of the PC(USA)'s apostasy in order to stir up the crowd to vote to leave the denomination.

They bring up events and personalities from the last thirty years or so that have embodied this apostasy.   There is the Re-Imagining Conference of course where uppity women feasted on milk and honey and offered praise to Sophia.   There is Dirk Ficca who asked "What is the big deal about Jesus?"   Some guy named Kaseman said he didn't think Jesus was God and the presbytery let him be a minister anyway.  Of course, there are the ever-present gays.   Why won't the denomination just send them to hell already?

That is the big problem apparently.  The PCUSA doesn't have a taste for silencing the free thinking members of the clergy and condemning people to hell.  Therefore, the true believers feel the need to shake the dust from their feet and form a more perfect union where they can police all the clergy and their blogs.

I am somewhat honored actually.  Along with folks I admire like Janet Edwards, Jim Rigby, and others I have made it to the status of "bullet point."  I am a bullet point on the powerpoint of the sad saga of the PCUSA's descent into darkness.

Being a self-proclaimed narcissist, I quote the texts that mention me.   It is interesting how the material in these documents is discovered, shaped, and presented.  It has an urban legend feel to it.   Here are a few of these statements on websites of various congregations that are having conversations about leaving the denomination.   I have found a few of these statements (usually in pdf) and I offer them to you as an interesting study.  If you have the time, do read them through.

This is Saddlerock Evangelical Presbyterian Church in Wenatchee, WA.  This church used to be in the PC(USA) but moved and changed its name.  It keeps its rationale for leaving on its website.  A Biblical Case (pdf)
These fundamentalists object to the reality that the gospels are not history.  The fundamentalist movement started in response to higher criticism of the Bible.  They have not moved past the 1920s.  Here is a well-written article on the controversy.

Here are a couple of statements from Memorial Presbyterian Church at Palm Beach Atlantic University in Florida.  The first is from their clerk of session's town hall presentation.   This church either has left or is in the process of leaving the PCUSA.


At the same town hall meeting, one Presbytery representative was asked about John Shuck, a PCUSA pastor in Tennessee who denies the authority of Scripture. This representative said Shuck should be reprimanded by the PCUSA and that he would call the Presbytery Executive in Tennessee about this matter. Why should he be reprimanded? Here’s a quotation from his blog www.shuckandjive.org


Take for example, me. I think the Bible is wrong about most everything. It is wrong about evolution, slavery, women, and gays. It has no authority on those topics. I think the Bible is wrong about cosmology, history, our future, Jesus, and God. The texts were all written by human beings without any supernatural or special revelation. Yet I preach in a PC (USA) pulpit. . . .The Bible contains no truth outside of what we can discover through public means of inquiry. Don't misunderstand. I enjoy the Bible. It is a marvelous human book. I read it and study it with all the critical means at my disposal. In so doing, I will do my part to undermine its Authority which I think is the next important step for religious freedom.

You should be shocked at this. But you should even be more shocked that within two weeks of that town hall meeting at First Presbyterian, North Palm Beach, John Shuck was elected by his Presbytery to be a commissioner to this summer’s PC (USA) General Assembly in Pittsburgh.

There used to be a day when this honor of attending General Assembly was reserved for pastors and elders who actually believed in the essential tenets of the Reformed faith. The fact that we do not have the courage as a denomination to name heresy and discipline those holding it is surely a sign of spiritual decay.

This is already starting to get a little creepy.  I don't know any of these people.  Yet I am being quoted and used as one of their reasons to justify leaving.  I appear to be popular with this particular church.  Also on its website, of the Top Ten Reasons that the Session is Unanimously Recommending You Vote Yes on April  29th (that is vote yes on leaving the PCUSA), I am reason number four!


4. We confess in the words of the Apostles Creed our belief in the bodily resurrection of Jesus Christ and our pastor’s preach that truth every Easter. Many PC (USA) seminaries who train our future pastors, do not agree.  To cite just one of many examples, Douglas Ottati who taught theology at Union Seminary in Virginia for 30 years and now teaches at Davidson College, affirms “the resurrection,” but what he means by that is “a continuing presence” of Christ in the lives of his disciples. He says that the disciples “experienced” Christ’s presence after his death, although it is not clear how he differentiates this experience from a residual memory.  Recognizing that his denial of the bodily resurrection might become a problem, Ottati wrote in a paper distributed among his seminary colleagues: “I am not insensitive to the fact that my interpretation yields few hard and fast rules for the preacher at Easter.” Ministers like John Shuck in Tennessee, James Rigby in Texas and countless others teach this doctrine from their pulpit. They rightly perceive that a culture of theological pluralism is firmly entrenched in the PCUSA, a denomination which by forfeiting clear theological boundaries has therefore welcomed a multiplicity of divergent and often contradictory faiths. They also know that binding PC (USA) case law [Hick, Kasemann] protects them and their heterodox views.

Notice the meme of rejecting the bodily resurrection, which is one of the fundamentals.  In this meme my name gets attached to theologian, Douglas Ottati, Jim Rigby, and others.   In this pdf, Five Solas, from First Presbyterian Church of Yakima, Washington, the church admits it copied this document from another church.   My name alone without any reference is sufficient to transmit the meme.


In recent years, several PCUSA ministers have publicly declared their inability to believe that Jesus rose from the dead. Among them are John Shuck in Elizabethton, TN, Rob Martin in Palo Alto, CA, Helen Dekker, in the Presbytery of West Jersey, and James Rigby, of Austin, TX. Says Rigby: “The resurrection took place when the community was born. What rose was the body of Christ. Maybe a body got up; I don’t care. That’s not the point … It’s a symbol of something deeper … What these symbols are talking about are not things that happened; they are things that are always true. The Resurrection is happening now. … Heaven is not another world someplace else. It’s a profound understanding of this world, of that which is not born and that which does not die.”...


The meme has been established.

Here is a lengthy rationale from the Fountain Inn Presbyterian Church in Fountain Inn, South Carolina.  This is from the blandly titled Questions for the Denominational Relations Committee.  I am listed under bullet point 38 along with others "who have made public statements that question the Divinity of Jesus, His bodily resurrection, and/or salvation only by His atonement."   Here is the list:


I am in good company including Pearl S. Buck!  I read The Good Earth when I was in 9th grade.   If this congregation needs to leave the denomination because of Pearl S. Buck, they are a bit long-suffering as she was a missionary in the 1920s.   That is just funny.

This is from Trinity Presbyterian Church in Satellite Beach, Florida.   This is a pdf, Michael's Reflections with a link on the church's website.


I am convinced that the majority of PCUSA leaders still believe in the Lordship of Christ, but it is disheartening to learn of how tolerant the denomination has become of heresy. Several months ago I discovered the blog of a fellow PCUSA pastor, John Shuck: www.shuckandjive.org. Because his blog openly denies the essentials of the Christian faith, and because he describes how his congregation—First Presbyterian of Elizabethton—celebrates pagan festivals, I initial thought the blog was satire, like Comedy Central’s “Colbert Report.” But after months of reading “Shuck and Jive,” his heresy is no joke. For example:

“I do not mean this as an insult, but I find much of our modern theological work little more than dealing in antiquities. The Trinity, the person of Christ, the sacraments, the authority of the Bible, eschatology, and so forth were invented in the pre‐modern era and are best suited for that time period.” (June 11, 2011)

We are enjoying some new rituals at your favorite little pagan church in the woods. Actually, we are a little bit pagan, a little bit Christian, and a little bit rock and roll. Sunday night at 6:15 p.m. we are having a ritual to celebrate Lammas…a harvest festival, marking the end of the period of summer growth and the beginning of the autumn harvest. (Aug 5, 2011)

I’m not surprised when I encounter non‐Christians with these views, but as tolerant as the PCUSA has become of heresy, John Shuck’s public denials of Christian orthodoxy are nonetheless shocking.

So why does Holston Presbytery (the body to which Rev. John Shuck is accountable) allow him to be a Minister of the Word and Sacrament? Apparently there aren’t enough elders and pastors in that presbytery who believe strongly enough about the Gospel of Jesus Christ or care deeply enough about the integrity of the PCUSA to shuck Shuck! While this is an extreme example, the trend towards accepting heresy is accelerating.

Our denomination’s loss of biblical authority, manifested prominently as confusion over sexual standards for leaders, will likely sink the denomination.

That was a colorful rant.  Most of the larger churches aren't quite as colorful and tend to be more measured in their criticism of the denomination.  But the smaller ones are more fun to read.  They retain the passion.  I think collecting and analyzing these statements would make for an interesting paper, a bullet point in our denomination's history. 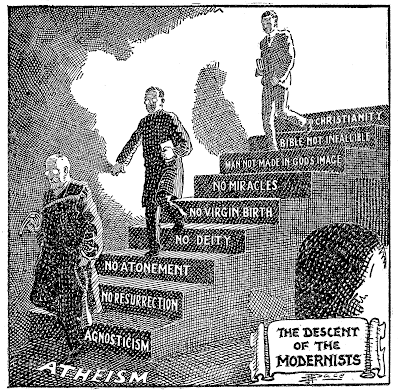