Another Helpful Resource from the LayMAN

The LayMAN has come out with another resource.  More propaganda regarding how the PCUSA is apostate.   And yes, I get a couple of honorable mentions.   The LayMAN just can't stand the "progressive" turn the denomination has taken.    They claim that they are the victims:


When it comes right down to it, this is not a conversation about leaving the PC(USA) but about how the PC(USA) has left us.

This particular document is virtually ready-to-copy and to distribute to church members, presbytery officials and so forth.  The convenient yellow shaded sections are suggestions for congregations to complete as they notice other clergy in their area that are not fundamentalist.


You very likely have examples from your own presbytery that you could present here.  Read the statements of faith of pastors and candidates in your presbytery packet.  Visit the websites of other area PCUSA churches and document the "beliefs" expressed.  See if there are churches associated with the "progressive" church movement and then call and ask what the pastors of those churches believe about the Bible, Jesus as the only way to salvation, the necessity of Christ's atoning death, His Virgin Birth, bodily resurrection, and miracles.  The idea here is not to set out on hunt for heresy.  The idea is to help you and your congregation understand that Presbyterians in the PCUSA espouse beliefs that are foreign to the historic Christian faith.   (bold mine)

"The idea here" is to fabricate a rationale for taking the property that congregations hold in trust for the PCUSA.   That is the bottom line.

I highlighted a portion of the above paragraph in bold to show a concerted effort to hassle progressive churches.  We have seen this action against progressive churches led by fundamentalist Presbyterians elsewhere.    David Felten was attacked most recently.   I interviewed David about it on Religion For Life. 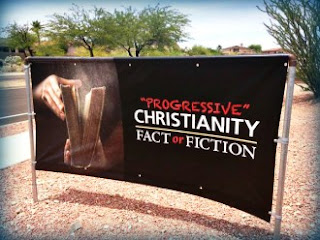 For what it is worth, I hope this document gets distributed widely and I am happy to help the LayMAN out with its publicity as the LayMAN is ever faithful in helping me with mine.   I hope a lot of people will visit my website www.religionforlife.com and witness a bonafide progressive heretic in action!

I hope they beat the bushes and expose more "progressives" because Heaven knows we need the publicity.    Far too many people actually believe the crazed proclamations by the LayMAN and don't know that historical criticism of the Bible and theological exploration as it relates to the modern world has been going on for centuries!

Perhaps it will be the LayMAN who will succeed in getting the word out that progressive Christianity exists and there are congregations in your neighborhood that don't believe all the nonsense that the fundamentalists proclaim.

Can I get an Amen?