Sunday is the fourth sermon in the summer series BYOS (Bring Your Own Sermon).   And the question is:
The questioner is referring to the guest post I wrote for the Friendly Atheist (I'm a Presbyterian Minister Who Doesn't Believe in God).     I have written more about that and related topics since that article was posted:
And of course, my sermons. An interview with Hemant Mehta of the Friendly Atheist is coming up next week on Religion For Life.  I think you will enjoy that.  I also interviewed Don Cupitt who just published his 50th book, Creative Faith:  Religion As A Way of Worldmaking.  You will like him, too! 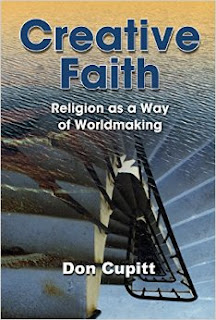 I found this quote from Cupitt:


So I am arguing that it is time for some of us to start being courageous. We must leave behind both cultural and ecclesiastical Christianity, admit our emptiness, and struggle for a new beginning. My constructive proposal is that we should learn to see our belieflessness not as a state of being derelict and damned, but as a clean sheet and a challenge to be creative.