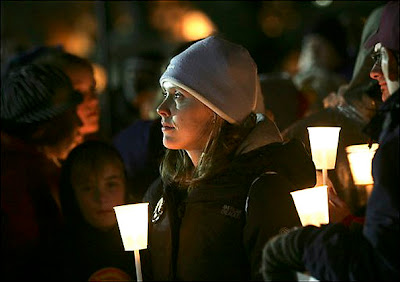 Jordan Schmidt, of Leesburg, Va., an anti-war protester, holds a candlelight vigil with others outside the White House in Washington, Friday, March 16, 2007. An estimated 3,000 protesters march from the National Cathedral to the White House to protest the military presence in Iraq and Afghanistan. (AP Photo/Lawrence Jackson) (Lawrence Jackson - AP)

We just returned from Washington D.C. from the Christian Peace Witness for Iraq. I will put up some of my own pics in the next couple of days. It began with non-violent direct action training followed by a service at the National Cathedral. Estimated attendance was 2,825 at the powerful worship service. Volunteers estimated about 2/3 marched down Massachusetts Avenue to the White House. About 200 or so decided on a planned arrest to raise awareness. It was cold, rainy, and snowy. I think they had planned on about 5,000 but the weather turned many away. Yet, I was amazed and impressed with the number of people who marched despite the conditions.

Here is an Associated Press Video

Jim Wallis of Sojourners told the truth. This is from CNN:

"This war, from a Christian point of view, is morally wrong -- and was from the beginning," the Rev. Jim Wallis, founder of Sojourners/Call to Renewal, one of the event's sponsors, said toward the end of the service to cheers and applause. "This war is ... an offense against God." (link)

Rev. Raphael G. Warnock gave a rousing witness. This is from ABC :

In his speech, the Rev. Raphael G. Warnock, senior pastor at Atlanta's Ebenezer Baptist Church, lashed out at Congress for being "too morally inept to intervene" to stop the war, but even more harshly against President Bush. 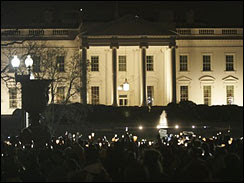 Anti-war protesters hold a candlelight vigil outside the White House in Washington, Friday, March 16, 2007. An estimated 3,000 protesters marched from the National Cathedral to the White House to protest the military presence in Iraq and Afghanistan. (AP Photo/Lawrence Jackson)


From CBS
John Pattison, 29, said he and his wife flew in from Portland, Oregon, to attend his first anti-war rally. He said his opposition to the war had developed over time. "Quite literally on the night that shock and awe commenced, my friend and I toasted the military might of the United States," Pattison said. "We were quite proud and thought we were doing the right thing." He said the way the war had progressed and U.S. foreign policy since then had forced him to question his beliefs. "A lot of the rhetoric that we hear coming from Christians has been dominated by the religious right and has been strong advocacy for the war," Pattison said. "That's just not the way I read my Gospel." (link) 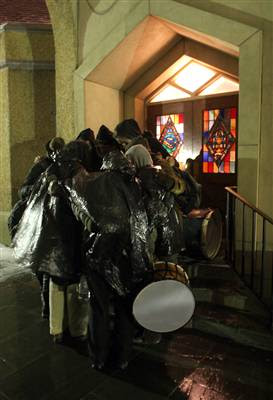 Activists from the Mennonite group the Psalters pray before taking part in an anti-war procession from the National Cathedral to the White House 16 March 2007 in Washington, DC. Members of Christian Peace Witness for Iraq along with other activists staged a rally outside the White House to call for an end to the occupation of Iraq and bringing the troops home. The protest is one of several to take place over the next few days to mark the fourth anniversary of the start of the war in Iraq. AFP PHOTO/Nicholas KAMM (Photo credit should read NICHOLAS KAMM/AFP/Getty Images)

Here is a pic from Al Jazeera 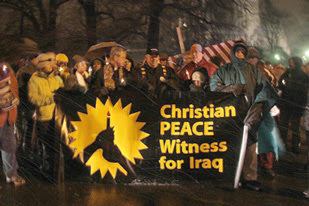 On Saturday there was a march on the Pentagon, in which we did not participate.

Jim Wallis said what I thought was the most important thing to say. He reminded us that beyond politics this war was and is immoral, unjust, and illegal. It has failed certainly to meet the ethic of Jesus of Nazareth and it fails the just-war criteria set out by Augustine.

I personally have been against this war from its inception. Perhaps now persons of conscience will continue to speak up and speak out and demand an end to this occupation.
Posted by John Shuck at 3/17/2007 06:40:00 PM