The Spirituality of Peace 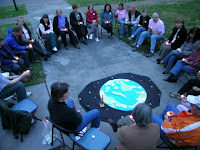 Jim Dahlman of the Johnson City Press has a nice column in today's paper about the peace movement in East Tennessee. In Spiritual Finds Spot in Vigils About War he observed the spiritual aspect to the peace vigils held this past week. This is the conclusion of his column:

But even people who don’t consider themselves religious recognized some kind of spiritual dimension to the war and their protests.
Steven Denton, for instance, calls the war a “moral-politicalethical issue” because of its heavy costs.
“What could we have done with that money, not to mention the loss of lives, the cost of taking care of the wounded?” he asked. This is a spiritual matter “on a human level — and a humane level.”

Several participants sounded similar notes that night. While the war isn’t necessarily a religious issue for them, at least in the formal sense, neither is it a mere matter of partisan politics. Their protests apparently rise from a deeper source. “A person’s faith should drive him,” Garrett said. “Regardless of a person’s religion, how we treat each other really defines who we are. Morality and the need to do good — that’s not a matter of religion. It’s a matter of humanity.” (Read More)

You don't have to belong to an organized religion, or to believe in a creed, or even believe in God to make ethical decisions or to have a deep spiritual life. Spirituality, for many, is connected with the deepest sense of being human. I think Sandra put it well: "Regardless of a person's religion, how we treat each other really defines who we are. Morality and the need to do good--that's not a matter of religion. It's a matter of humanity."

It is a bit of a challenge to have peace vigils that tend to touch on the spiritual--the deep issues that are more than political--while being senstive about the use of religious symbols. Even though it is a challenge, I think it can be done. Using a variety of symbols from different religious traditions as well as humanistic poetry etc. can make for an experience that is deeply ecumenical and powerful as well.
Posted by John Shuck at 3/24/2007 08:11:00 AM