Oh, bury me not on the lone prairie
These words came low and mournfully
From the pallid lips of a youth who lay
On his dying bed at the close of day

Oh, bury me not and his voice failed there
But we took no heed to his dying prayer
In a shallow grave just six by three
We buried him there on the lone prairie.
--Johnny Cash, "Oh, Bury Me Not" 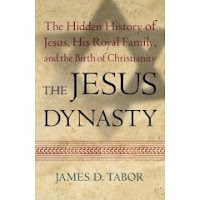 I have been following James Tabor's blog with interest. I have read his book the Jesus Dynasty (and have reviewed it here). 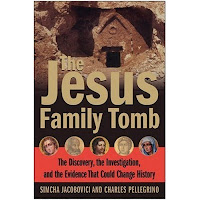 I have also read the book by Simcha Jacobovici and Charles Pellegrino The Jesus Family Tomb. This book tells the story of the making of the DVD with a lot more information. It is great fun!

I am finding this whole thing fascinating. What is fascinating is not only the discovery itself, but the hoopla surrounding it. It is vicious out there! But through it all, Tabor is cool and professional. His post today demonstrates that. In an essay he addresses two common objections to the Talpiot Tomb being the tomb of Jesus and family:

1) that Jesus would not have had a family tomb in Jerusalem, either because he was from Galilee or that he was too poor; and
2) that since the “names are common” in the Talpiot tomb (Peter, Paul, & Mary) the site can not possibly be connected to Jesus of Nazareth. (Read his essay, Tomb Mantras)

You can read his essay for yourself. I post his conclusion here:

Taken as a whole it seems to me that this tomb and its possible identification with Jesus and Nazareth and his family should not be dismissed. The evidence from the gospels I have surveyed, coupled with the cluster of significant names that fit our hypothetical expectations for a posited pre-70 Jesus family tomb, is strong, and should be further tested. Of course, if the ossuary inscribed “James son of Joseph,” is added to the cluster, and the evidence for that possibility is unresolved at this point, the correspondence would be all the more striking. What is needed is further work on the epigraphy, expanded patina tests, further DNA testing if that is possible, and since the tomb in 1980 had to be excavated so quickly, but now has been located, a fuller archaeological examination of the site itself.

I have no clout or authority. But whatever I have I will summon with this request. Check this out, scholars. Explore this with an open mind and examine all the evidence. Get those DNA samples, excavate the tomb again, and debate this. That is the job of scholars.

For clergy, we have the job of engaging congregations in conversations about the Gospels and the rest of the New Testament as both literary and theological products that developed over time. We need to talk about resurrection and all that it might have meant in the early centuries and what it might mean today. We will need to talk about the distinction between resurrection and resuscitation of corpses.

For laity in the church, you have the job of asking questions and of encouraging your clergyperson to talk about these issues in classes and in sermons.

It will be important for us to address questions about religion, Jesus, Christianity, life, and meaning. If Jesus is dead in what sense is he alive? Is Christianity the only true religion? Are heaven, hell, and the afterlife meaningful? For what do we hope? For what do we live? What is most precious? Good questions, I think, for religious communities. What are yours?
Posted by John Shuck at 3/22/2007 09:15:00 AM