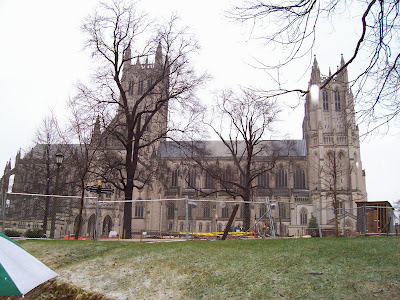 Here is a pic I took of the National Cathedral on Friday. I told the story of our trip to D.C. in my sermon today. The sermon will be on-line in a day or two. I will take excerpts from it and share some pictures with the story. 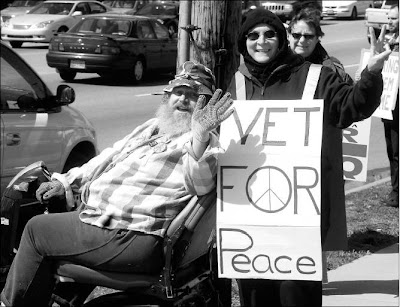 At this point I want to remind folks about the various peace vigils that will be happening in and around the tricities area this weekend.

Here are some pics in yesterday's Johnson City Press regarding the peace demonstration on Roan and Mountcastle.

We will have a peace vigil at First Pres. Monday night. Join us or attend one of the others in the area. ConcernedTNCitizens and DemocracyNowtricities has information about other peace vigils.

This is part of the sermon I preached this morning:

"What profit is there for the person who gains the world but gives up her soul?" --Jesus

In response to grief of the terrorist attack in September 2001 and in response to fear, the United States attacked a sovereign nation before it attacked us. All the reasons given for the invasion--weapons of mass destruction, the evil of Saddam Hussein, and the terrorist attacks of September 11th--were all rationales, and feeble ones at that. Simply put, the United States acted as an aggressor. We started a war when there were other options.

We have been in it now longer than the United States was in World War II and nearly as long as the War Between the States. We need to change course, not because popular opinion is changing, not because of deaths to our soldiers and the Iraqi people, not because we are bogged down in a situation we cannot win, not because we spend over two hundred million dollars a day to fund it, not for any of those reasons alone or even collectively. We need to change course because the path we have taken is immoral and once we justify immorality, we lose our conscience and our soul. No amount of strategy can change that.

Whatever answer there is to ending this war will not be based primarily on strategy. Strategy follows principle. It is principle to which we as Americans need to remember and to remind ourselves and our leaders.

It is principle for which we need to stand and for which we need to speak and act. It is the principle of which Jesus and Paul both spoke. Do not resist evil with evil. Do not become what you hate. I am a believer that it is never too late for repentance. Repentance is recognizing wrong and changing direction. When we embrace our principles and speak for them. When we act from our center, then we can worry about strategy and politics and all the rest. 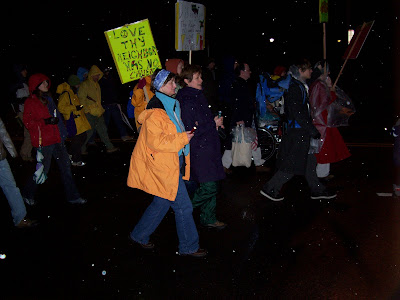 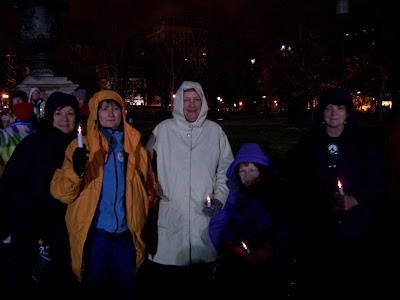