Renaissance or the Road to Hell?

At 11:35 a.m. Thursday, students across campus participated in a "walkout," leaving class early to attend a rally for renewable energy.

"As an institution of higher learning, we feel that we should be spearheading the sustainability movement," said Initiative for Clean Energy president Lance Lewis as students, faculty and staff were assembling in Borchuck Plaza for the rally. "We should be leading the way, but instead we're still burning coal and natural gas, polluting our air and wrecking our vital ecosystems in the Appalachian mountains, and that's got to end."

The students want university president Paul Stanton to sign on to the American College and University Presidents' Climate Commitment (ACUPCC). According to the website, signatories "are pledging to eliminate their campuses’ greenhouse gas emissions over time." This includes: 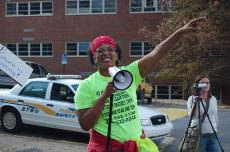 My friend, activist Ash-Lee Henderson (who hangs out with us Presbys on occasion) had this to say:


"This basically means that we would be consuming enough sustainable energy that it would balance the amount of pollution that we're putting out," said Ash-Lee Henderson. "The rally was inspiring and it moved people to get active in the movement to stop our direct purchasing of coal."

Good work Lance, Ash-Lee and the students of ETSU! If you would like to contact President Paul Stanton and encourage him to get green, here is his contact information:

Meanwhile, The Oil Drum reported that 2/3 of the geologists at the Petroleum Geologists Conference in London voted following a debate on peak oil, that, yes, peak oil is a concern.

Jeremy Leggett, geologist and author of Half Gone: Oil, Gas, Hot Air and the Global Energy Crisis, arguing that peak oil is a concern responded to this question regarding the debate:


Q: What do you think the result means?

The result seems to suggest that the rank-and-file practitioners hold a very different view of peak oil from the BP/Shell/Exxon etc. top tables.

Q: How do you think the peak oil drama is going to play out?

We will find out who is right about peak oil before the decade is out – earlier, rather than later. The discontinuities will be seismic. My preferred scenario is this one. Within just a couple of decades, the world will be floating on a sea of cleantech energy technologies, and enjoying a renaissance built around the many social value-adders inherent in those technologies. Oil shocks, oil wars, and all the other dismal paraphernalia of the hydrocarbon age will seem so very ….twentieth century. I elaborate in my books “Half Gone”, and “The Solar Century.” Of course, there are other scenarios.

Q: You're known as a climate-change campaigner as much as a peak-oil whistleblower. How do you think these two issues are related?

Peak panic will prompt a race to mobilise oil-replacement technologies. If cleantech wins out, we win, and renaissance beckons. If coal-to-liquids and tar sands win out, we lose, and we are on a road to hell. We start destroying wealth faster than we create it well before the mid point of the century. Again, I elaborate in my books, and keep the drama updated on my Triple Crunch Log website, www.jeremyleggett.net.

Here is a quick clip regarding "the solar century."

I finished a critically important book by Richard Heinberg, Blackout: Coal, Climate, and the Last Energy Crisis. This book provides an analysis of the available coal around the world (not nearly as much as we think). His final chapter provides scenarios of what we can do. In this final chapter he responds to why he subtitled his book, "last energy crisis."

If, as our scenario exercise suggests, there are really only two basic paths ahead--on one hand, the attempt to maintain maximum economic growth using fossil fuels of declining quality (with or without carbon capture or storage); or on the other, a scaling back of consumption, population, and economic growth so that all needs can be provided from renewable energy sources--then the end of coal means the last energy crisis in either a positive or negative sense. 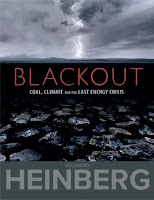 In the negative sense: Once world coal production peaks, unless nations are already well on the way toward a renewable energy economy, they won't have a high net energy source available to keep the lights on and fund a further transition that only begins at that time. The peak of world oil production in 2010 will impact the world economy profoundly. Without a coherent effort to proactively reduce energy consumption further while developing renewable sources, the decline of energy from coal toward the middle of the century will deliver a coup de grace to industrial civilization, making the maintenance of electrical grids problematic to impossible. We will then have come to the end of the road, having used nature's endowment of cheap, energy-dense fuels without having built a bridge to the future. What follows is the final Blackout.

If we do develop a renewable energy infrastructure and a steady-state economy based on a recognition of ecological limits, the period of coal's decline will constitute the last energy crisis in a positive sense: once we have adopted a no-growth economic paradigm and are relying on resources that are continually replenished, we may never again have to worry about energy supplies.

The choice before us could hardly be starker. Pp. 166-7

Here is an article that later became a chapter in his book, Coal in the United States.

The US currently produces over a billion tons of coal per year, with quantities increasing annually. This is well over double the amount produced in 1960. However, due to a decline in the average amount of energy contained in each ton of coal produced (i.e., declining resource quality), the total amount of energy flowing into the US economy from coal is now falling, having peaked in 1998. This decline in energy content per unit of weight (also known as "heating value") amounts to more than 30 percent since 1955. It can partly be explained by the depletion of anthracite reserves and the nation’s increasing reliance on sub-bituminous coal and even lignite, a trend that began in the 1970s. But resource quality is declining even within each coal class.

Finally, you need to watch Home. A few of us watched it at the church last night. A powerful, sobering film with astounding photography and accurate information about our global condition regarding energy, our demands upon it, and the human impact on the environment. It also includes a fantastic natural history of Earth.

You can watch it on your computer on Youtube.

According to the film, we have about ten years to radically change the way we live or we are in the words of Jeremy Leggett, "on a road to hell."