Woot! I Have Been Layed!

I have been waiting a long time. Previously, I have made it to the Letters to the Editor section. But today, thank you very much, Mr. LayMAN himself, Parker "Burn the Heretics!" Williamson featured me in one of his rants.

Awesome. Check it. Here is the part about me!

Not only does the PCUSA turn a deaf ear to whispers of heresy, it harbors clergy who loudly applaud it. The Rev. John Shuck, pastor of First Presbyterian Church in Elizabethton, Tenn., an advisor to the Presbyterian campus ministry program at East Tennessee State University, and a member of Holston Presbytery’s governing council came quickly to the five ministers’ defense on his March 23 blog.

Shuck warned conservative church people might attack non-believing clergy by focusing on their integrity. Such attacks turn reality on its head, says Shuck, because faithless ministers are not the problem. The real problem is “the traditional church’s worn out faith” that these ministers no longer believe. Shuck believes these ministers are announcing “the demise of supernaturalism and the creeds that continue to uphold it,” and that their non-belief should be applauded rather than punished.

“We were not placed in any garden by any divine being,” Shuck tells his Internet audience. “No god/man came to Earth, walked on water, rose from the dead and sits on a heavenly throne. That is religious fiction. It is metaphor, story, myth, human invention. It is how our ancestors tried to find meaning. Bless their hearts.”

Shuck continues, “My advice for clergy and for laypeople who are growing out of a childish supernaturalistic past is to stand your ground. Don’t let them set the terms or the rules. Don’t resign. Be bold. Tell the truth. Don’t call it a loss of faith. It is a growth in understanding. It is waking up from sleep. It is gaining sight from blindness. It is resurrection from death to life. Happy Easter.”

One wonders how the churches of Holston Presbytery have agreed to tolerate this in-your-face apostasy, much less commend college students to his counsel and honor him with a position of presbytery governance.

Happy Easter, indeed! Shuck has sucked the life out of Easter. Scripture speaks clearly to those who so cavalierly discard the Gospel:

“If Christ has not been raised, your faith is futile, and you are still in your sins.”

Here is the blog entry he was talking about, A Church Without God.

I am glad Mr. Williamson mentioned the Presbyterian Campus Ministry. 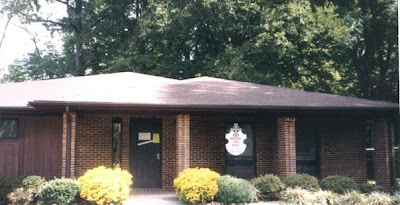 Join us Tuesday nights at 7 and for the program at 8. All ETSU students are welcome!!

The students and I work together to create some great programs.

Last night we had an authentic Passover Seder presented by rabbinical student, Barbara Turner, and her students at Hillel (the Jewish campus ministry at ETSU).

Thanks for the shout, Parker!