I want to clarify a statement I made in my last post. I wrote

Amendments regarding marriage are on many state ballots as well (including Tennessee and Virginia). I wrote previously regarding my opinion as well as a post why I think this issue is far less important than those that are truly facing us.

I intended to point out that the religious and political right are using this issue to divert us from larger issues that face us, namely, energy, ecology, and economy. However, the marriage amendments on the ballot are important for voters. These amendments deny basic rights, liberties, and protections for individuals and families. These amendments need to be exposed for their injustice and defeated. Rick Ufford-Chase, former moderator of the PCUSA wrote an article in the Arizona Daily Star regarding the amendment in Arizona. He published a reflection upon it on his blog. I am grateful to him for his public advocacy on behalf of gay, lesbian, bisexual, and transgender persons. 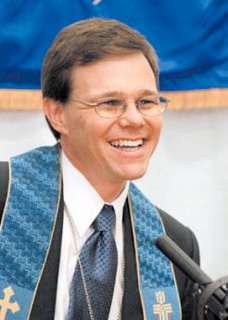 Arizona, like many states, is increasingly turning to ballot propositions in our governance - something I have grave concerns about because it tends to reduce complex and nuanced public policy issues to twenty second soundbites on t.v. or yard signs that do nothing to create an informed electorate. This round, we've got 19 of these initiatives. I spent over an hour and a half reading the various proposals and their critiques and justifications, and still found it difficult to sort through them when I went to cast an early ballot last week. One of the most pernicious is Proposition 107, which would change our constitution to make same-sex marriage illegal in our state (it already is), and to deny any marriage-like benefits to all persons who are not married.

I felt strongly enough about this one to write an opinion piece for our local paper, the AZ Daily Star, which ran it in it's electronic version of the paper about a week ago. As it's circulation has widened, I've been asked by several people to share it more broadly through my blog.

So for those of you who are interested, here's my own take on this one - limited to the 500 words allowed by the newspaper. . .

Proposition 107 would explicitly deny any “marriage-like” benefits to persons who are not married, and would constitutionally define marriage as only being available to persons of opposite gender. Like the broader society, the faith community is deeply divided on this issue.

My experience as the highest elected official of the Presbyterian Church (USA) from June of 2004 to June of 2006 gave me a glimpse into the passion and divisiveness of this debate. Though it is clear that there is currently no consensus in our churches to broaden the definition of marriage, our denomination has been clear that we will not become unwitting participants in any movement to isolate gay and lesbian persons as a group, nor will we condone discriminatory practices against the lesbian, gay, bisexual or transgender community from our legislative, executive or judicial branches of government. This is entirely consistent with our denomination’s historic advocacy for women, persons of color, undocumented persons, and those who live with mental or physical disabilities, all of whom also face the possibility of discrimination because of who they are.

I long for the day when all who desire to make a lifelong commitment to one another are able, as I am, to do so within the bonds of the covenant of marriage. Someday, it could happen. After all, the biblical story is full of examples of God’s people being surprised by what God had in mind for them. We Presbyterians believe that God is constantly being revealed to us in ways that challenge, trouble, and occasionally delight us. For that reason, I will continue to be in dialogue with my sisters and brothers with whom I disagree about this matter. As people of faith, all of whom are struggling to be faithful to their understanding of God, we must find respectful ways to wrestle with this and many other issues that divide us.

However, what we must not tolerate are laws motivated by hate or discrimination, or that single out an entire class of people to be treated differently than the rest of us. Prop. 107 would take away domestic partner benefits such as health insurance from public employees. It would remove domestic violence protections from unmarried persons. It makes simple things like the right to visit a loved one in the hospital impossible.

Questions of how marriage is defined will continue to be debated within our faith communities and across our society. In the meantime, let’s assure that our laws embody the best of what our country has always been – a safe haven for those who might be targeted elsewhere because of who they are or what they believe. Let’s honor our country’s history as a place of tolerance, mutual forbearance, care and concern for all members of our communities. Those are values that all of us, both in and out of the church, ought to be able to affirm.

Blessings on each of you as you also go to the polls in the next few days. 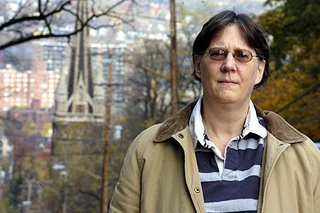 A friend of mine, Janet Edwards, a minister in Pittsburgh, Pennsylvania, has been an advocate for glbt rights in the church for a long time. She is on trial for conducting a marriage for a lesbian couple. Here is the article:

Most people send formal invitations for weddings, but the Rev. Janet Edwards has gone a step further with invitations to her church trial for conducting the wedding of two lesbians.

"I feel such delight in having an opportunity to engage in the absolutely essential discussion that has to go on in the Presbyterian Church over the place of gay, lesbian, bisexual and transgender people among us that I really do want the church to come and join in it and witness it. I can't quash that delight," said the Rev. Edwards, a minister of the Presbyterian Church (USA) and a pastoral associate at the Community of Reconciliation in Oakland.

Recipients are invited to the Nov. 15 trial at 9 a.m. in The Priory, a small hotel on the North Side. Out-of-town guests are advised of a block of hotel rooms with a shuttle to the trial, and that complimentary travel can be arranged. It further invites them to a "worship celebration and lunch" at the Pittsburgh Golf Club in Schenley Park. It concludes:

"Janet wants the world to come. Feel free to invite anyone."

"Wow," said Jerry Van Marter, news director for the Presbyterian Church (USA), who has covered many church trials and never seen anything the like.

But he was not surprised by the location. Trials must be held on neutral territory.

"The last trial I attended was in a hotel ballroom near the San Francisco airport," he said.

Both the Rev. Jim Mead, pastor to Pittsburgh Presbytery, and Jay Lewis, stated clerk to the presbytery, declined comment.

Trials are normally open to the public. They resemble civil trials with testimony and cross-examination. But there are multiple judges, typically seven or nine clergy and elders, Mr. Van Marter said.

Once testimony ends, the proceedings are closed as the judges deliberate.

Rulings are typically issued within days. Either side can appeal to the regional and then the national level.

The Rev. Edwards, 56, faces charges for a marriage ceremony she celebrated in June 2005. The denomination's high court has said that clergy in the Presbyterian Church (USA) may bless same-sex couples as long as the ceremony does not resemble a marriage liturgy.

But the Rev. Edwards has been clear that she celebrated a marriage. She argues that there is no ban on same-sex marriage ceremonies because the ruling said clergy "should not" conduct them -- language she believes falls short of a prohibition.

The Rev. Edwards, a former moderator of Pittsburgh Presbytery, has been an activist for gay people in the church since her ordination in 1977. She said she was inspired by the long, devoted relationship between a beloved uncle and his partner.

She will plead "not guilty." If she is convicted, penalties could range from a reprimand to removal from ministry.

While the Rev. Edwards said she would be crushed to lose her Presbyterian clergy credentials, she admits she has a freedom that many clergy lack.

An heiress married to a physician, she is a descendant of the founder of what is now National City bank, and of a silent partner in the founding of Standard Oil. In addition, the congregation she serves is supportive of her efforts and is affiliated with five denominations, one of which officially affirms same-sex marriage.

"I know that my situation is not the same as my colleagues," she said, noting that she doesn't have to worry about poverty. She said she is reminded of Mordecai's words to the biblical heroine Esther, who was chosen to be a queen of Persia at a time when Jews faced genocide.

"He said that perhaps it was for this very moment that you were brought to the position you are in. I very much feel that the circumstances of my life -- both my economic circumstances and the fact that my children are now grown -- have all configured to have me step forward at this moment," she said.

There are several advocacy groups within the PCUSA working for equality in church and society. They include More Light Presbyterians, That All May Freely Serve, The Shower of Stoles Project, The Witherspoon Society, and Covenant Network of Presbyterians.

Here are a few articles regarding my advocacy for sexual and gender minorities in church and society.

Church Politics:
Amendment A will Keep All God's Creatures in the Ark (Alas, it was defeated).
Not Justice, Not Progress: Just the Same Second-Class Status (I wrote against this amendment because I felt it did not go far enough in removing the discriminatory policies of our church. It did pass, however, and makes a small step toward equality).

Holy Unions:
Faith and Values: Recognize the Sacredness of Life, Love (This article appeared the same day we held a holy union service in my previous congregation).
Today is a Great Day! (The sermon I preached at that service).
Same Sex Marriage Raises Emotional Response (Debate in our community about the marriage amendment in Montana in 2004. Alas the amendment passed).

Education and Support:
A study group for gay, lesbian, bisexual, and transgender folks and supporters at my previous congregation.

Hate Crimes:
Support Legislation Against Hate Crimes (A letter to the editor in favor of including sexual orientation to the Montana hate crimes list. Alas, it failed).

Marriage Equality:
A letter to the editor in the Johnson City Press regarding the marriage amendment.

The following states have marriage amendments on their ballot this year. They include Arizona, Colorado, Idaho, South Carolina, South Dakota, Tennessee, Virginia, and Wisconsin. To find out more about the amendment in your state, go to the Human Rights Campaign.

In Tennessee, the Tennessee Equality Project has information.

I am hoping for a miracle that this amendment will be defeated in every state. That miracle will happen if those who care enough for justice go to the polls on Tuesday and vote.