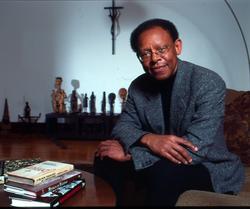 "As long as religion scholars do not engage racism in their intellectual work, we can be sure that they are as racist as their grandparents, whether they know it or not." Risks of Faith: The Emergence of a Black Theology of Liberation, 1968-1998.

At Princeton Theological Seminary I took a course entitled: "The Theology and Ethics of James Cone." It was one of those courses that continues to haunt ("challenge" is too small of a word) me as a white Christian. Cone was the first to create a systematic Black Theology. He has written a number of books. I have read most of them, except for his latest Risks of Faith: The Emergence of a Black Theology of Liberation, 1968-1998, which I plan to buy.

He is an incredibly eloquent and incisive theologian. PBS featured him in its This Far By Faith series. And here is a clip in which he speaks about the Black Church as a resistance movement. You can read a critique of his theology here.

During the class we watched "Eyes on the Prize" which documents the Civil Rights struggle in America. I would recommend it for study with a congregation.

The following is an excerpt from his book Risks of Faith. Read it then look at some images of Jesus and take a quiz.

The Religious Cancer of Racism
By James H. Cone

People often ask me whether I am still angry as when I wrote Black Theology and Black Power. When I hear that question I smile to contain my rage: I remain just as angry because America, when viewed from the perspective of the black poor, is no closer to Martin Luther King, Jr.'s dream of a just society than when he was killed. While the black middle class has made considerable economic progress, the underclass, despite America's robust economy, is worse off in 1998 than in 1968. The statistics are well known, yet they still fail to shock or outrage most Americans.

America is still two societies: one rich and middle-class and the other poor and working-class. William J. Wilson called the underclass "the truly disadvantaged," people with few skills to enable them to compete in this technological, informational age. To recognize the plight of the poor does not require academic dissection. It requires only a drive into the central cities of the nation to see people living in places not fit for human habitation.

What deepens my anger today is the appalling silence of white theologians on racism in the United States and the modern world. Whereas this silence has been partly broken in several secular disciplines, theology remains virtually mute. From Jonathan Edwards to Walter Rauschenbusch and Reinhold Niebuhr to the present, progressive white theologians, with few exceptions, write and teach as if they do not need to address the radical contradiction that racism creates for Christian theology. They do not write about slavery, colonialism, segregation, and the profound cultural link these horrible crimes created between white supremacy and Christianity. The cultural bond between European values and Christian beliefs is so deeply woven into the American psyche and thought process that their identification is assumed. White images and ideas dominate the religious life of Christians and the intellectual life of theologians, reinforcing the "moral" right of white people to dominate people of color economically and politically. White supremacy is so widespread that it becomes a "natural" way of viewing the world. We must ask therefore: Is racism so deeply embedded in Euro-American history and culture that it is impossible to do theology without being antiblack?

There is historical precedent for such ideological questioning. After the Jewish Holocaust, Christian theologians were forced to ask whether anti-Judaism was so deeply woven into the core of the gospel and Western history that theology was no longer possible without being anti-Semitic? Recently feminists asked an equally radical question, whether patriarchy was so deeply rooted in biblical faith and its male theological tradition that one could not do Christian theology without justifying the oppression of women. Gay and lesbian theologians are following the feminist lead and are asking whether homophobia is an inherent part of biblical faith. And finally, Third World theologians, particularly in Latin America, forced many progressive First World theologians to revisit Marx's class critique of religion or run the risk of making Christianity a tool for exploiting the poor.

Race criticism is just as crucial for the integrity of Christian theology as any critique in the modern world. Christianity was blatantly used to justify slavery, colonialism, and segregation for nearly five hundred years. Yet this great contradiction is consistently neglected by the same white male theologians who would never ignore the problem that critical reason poses for faith in a secular world. They still do theology as if white supremacy created no serious problem for Christian belief. Their silence on race is so conspicuous that I sometimes wonder why they are not greatly embarrassed by it.

How do we account for such a long history of white theological blindness to racism and its brutal impact on the lives of African people? Is it because white theologians do not know about the tortured history of the Atlantic slave trade, which, according to British historian Basil Davidson, "cost Africa at least fifty million souls?" Have they forgotten about the unspeakable crimes of colonialism? Author Eduardo Galeano claims that 150 years of Spanish and Portuguese colonization in Central and South America reduced the indigenous population from 90 million to 3.3 million. During the twenty-three-year reign of terror of King Leopold II of Belgium in the Congo (1885-1908), scholarly estimates suggest that approximately 10 million Congolese met unnatural deaths -- "fully half of the territory's population." The tentacles of white supremacy have stretched around the globe. No people of color have been able to escape its cultural, political, and economic domination.

Two hundred forty-four years of slavery and one hundred years of legal segregation, augmented by a reign of white terror that lynched more than five thousand blacks, defined the meaning of America as "white over black." White supremacy shaped the social, political, economic, cultural, and religious ethos in the churches, the academy, and the broader society. Seminary and divinity school professors contributed to America's white nationalist perspective by openly advocating the superiority of the white race over all others. The highly regarded church historian Philip Schaff of Union Seminary in New York (1870-1893) spoke for most white theologians in the nineteenth century when he said: "The Anglo-Saxon and Anglo-American, of all modern races, possess the strongest national character and the one best fitted for universal dominion."

Present-day white theologians do not express their racist views as blatantly as Philip Schaff. They do not even speak of the "Negro's cultural backwardness," as America's best known social ethicist, Reinhold Niebuhr, often did and as late as 1965. To speak as Schaff and Niebuhr spoke would be politically incorrect in this era of multiculturalism and color blindness. But that does not mean that today's white theologians are less racist. It only means that their racism is concealed or unconscious. As long as religion scholars do not engage racism in their intellectual work, we can be sure that they are as racist as their grandparents, whether they know it or not. By not engaging America's unspeakable crimes against black people, white theologians are treating the nation's violent racist past as if it were dead. But, as William Faulkner said, "the past is never dead; it is not even past." Racism is so deeply embedded in American history and culture that we cannot get rid of this cancer simply by ignoring it.

There can be no justice without memory -- without remembering the horrible crimes committed against humanity and the great human struggles for justice. But oppressors always try to erase the history of their crimes and often portray themselves as the innocent ones. Through their control of the media and religious, political, and academic discourse, "they're able," as Malcolm put it, "to make the victim look like the criminal and the criminal to look like the victim."

Even when white theologians reflect on God and suffering, the problem of theodicy, they almost never make racism a central issue in their analysis of the challenge that evil poses for the Christian faith. If they should happen to mention racism, it is usually just a footnote or only a marginal comment. They almost never make racism the subject of a sustained analysis. It is amazing that racism could be so prevalent and violent in American life and yet so absent in white theological discourse.

President Clinton's call for a national dialogue on race has created a context for public debate in the churches, the academy, and the broader society. Where are the white theologians? What guidance are they providing for this debate? Are they creating a theological understanding of racism that enables whites to have a meaningful conversation with blacks and other people of color? Unfortunately, instead of searching for an understanding of the great racial divide, white religion scholars are doing their searching in the form of a third quest for the historical Jesus. I am not opposed to this academic quest. But if we could get a significant number of white theologians to study racism as seriously as they investigate the historical Jesus and other academic topics, they might discovered how deep the cancer of racism is embedded not only in the society but also in the narrow way in which the discipline of theology is understood.

From Risks of Faith: The Emergence of a Black Theology of Liberation, 1968-1998 by James Cone. 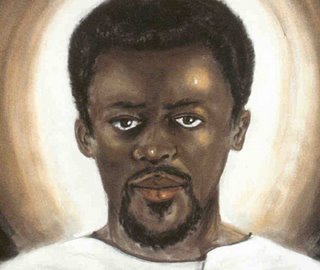 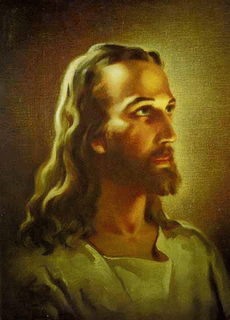 Here is an interesting test to raise your level of consciousness regarding racism.
Check it out!