The Infancy Gospel of Thomas

The new book by Marcus Borg and John Dominic Crossan, The First Christmas, is a helpful one for understanding the infancy stories in Matthew and Luke.


Borg and Crossan refer to them as parables about Jesus. Jesus told parables. We know that when we read or hear the parable of the Good Samaritan, for instance, that the point is not whether or not there was a Samaritan who actually helped some guy in a ditch.

We know it is a story and to debate its historicity would miss the point. Instead we focus on what the story means. Borg and Crossan suggest that the infancy narratives ought to be treated in the same way. They are parables about Jesus, not accounts of his actual birth. We miss the point by debating their historicity. The important question is "What do these parables of his birth mean?" "What do they say about Jesus and the world in which he participated?"

Fundamentalists get hung up that somehow the gospels would not be credible if these stories were not true historically. I have heard again and again even preachers say: "If Jesus wasn't born of a Virgin, then why be a Christian?" Often this odd way of thinking is put more forcefully:

"Unless you believe in the Virgin Birth, you are not a Christian!"

Frankly, I really don't care what people think. If it is important to you to think that nary a sperm fertilized Mary's egg, then go ahead. I cannot insist that the infancy narratives are legends beyond all possible doubt. Of course, they could be true.

I often find my ministry to those people who have been brought up thinking that you have to believe that legends are history in order to be Christian. They think that way because they have been told that ad nauseum by fundamentalist preachers. They are so relieved to know that there is another way.

But then they have to deal with their literalist friends and family members. Here is an argument put forth by those who think we should credulously assent to every legend in the Gospels:

Couldn't God do it if God wanted to do so? Could not God make Mary pregnant? Could not God cause a star to hover over a house? Who are you Mr. Smarty Pants Child of the Enlightenment to doubt the wonder-working power of God?

What do you say to that? I just nod and smile.

I have been tempted to suggest that there are more stories that we need to believe, such as the Infancy Gospel of Thomas. These are stories regarding the childhood of Jesus. Jesus was handy to have around:

(1) Since his father was a carpenter, he was making plows and yokes in that season.

(2) An order for a bed was given to him from a rich man, but one of the boards, the one called the crossbeam, was shorter than the other. And since Joseph had no idea what to do, the child Jesus said to his father Joseph, "Put the two pieces of wood down and line up the ends." 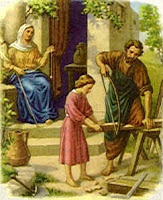 (3) And Joseph did just as the child told him. Then, Jesus stood at the other end and grasped the shorter piece of wood and stretching it, he made it equal with the other.

(4) And his father Joseph saw and was amazed and, taking the child, he kissed him, saying, "I am blessed because God gave me this child."

Is that a legend or is it historically accurate? One could say: If Jesus didn't stretch this board then why be a Christian!?

Or one could say: Jesus could have done that, right? He was the Son of God. He turned water into wine. He could make a board longer. Who are you to doubt the wonder-working power of our child lord?

It is the same argument that kids who are struggling with Santa offer to their deconstructionist friends.

Nasty Deconstructionist: How can you believe that Santa goes to every house in one night and eats all of those cookies? There are six billion people in the world. There isn't enough time in one night!

Sweet Confused Child: Santa is magic. He can do it if he wants.

This growing up means that the story comes alive within us. We no longer need to believe it externally, but we need to incorporate it into our lives.