An No One Will Even Object...


I found this article to be particularly disturbing.

Feds Under Pressure to Open U.S. Skies to Drones 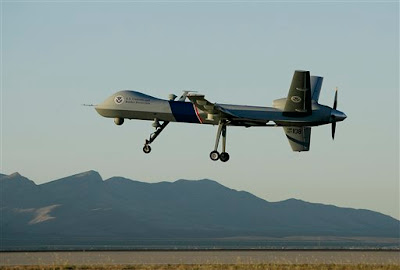 WASHINGTON (AP) — Unmanned aircraft have proved their usefulness and reliability in the war zones of Afghanistan and Iraq. Now the pressure's on to allow them in the skies over the United States.

The Federal Aviation Administration has been asked to issue flying rights for a range of pilotless planes to carry out civilian and law-enforcement functions but has been hesitant to act.

How did they prove their usefulness in Afghanistan? They are useful for killing people. When the economy completely melts down within the next few years, governments will want the desirables to have access to the remaining resources and the undesirables to be shot down with drones.

Don't assume that you will be one of the desirables.

Remember last fall at the G-20 summit, when for the first time law enforcement used the sonic cannon on American citizens? The media called them "anarchists." So I guess it's all good.