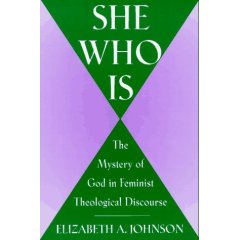 My post on Sophia raised interest. Here are some resources for those interested in exploring this further. Elizabeth Johnson, a systematic theologian at Fordham, wrote She Who Is: The Mystery of God in Feminist Theological Discourse 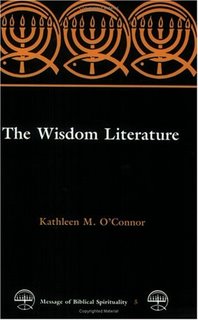 Kathleen O'Connor, is a Professor of Old Testament at Columbia Theological Seminary. She wrote The Wisdom Literature which I quoted earlier. 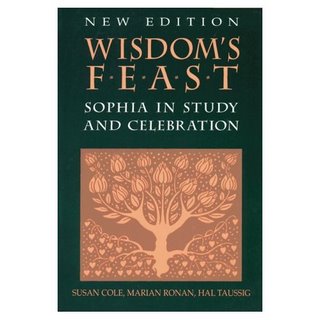 
(who is coming to Elizabethton, November 3-4), wrote with Susan Cole, and Marian Ronan Wisdom's Feast: Sophia in Study and Celebration. 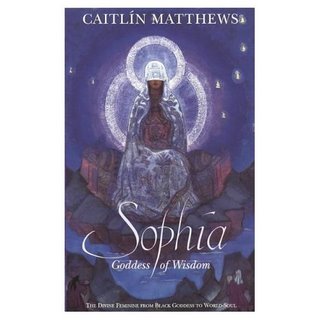 Today, I want to summarize the creation mythologies in the Hebrew Scriptures. I use the word mythology intentionally. Mythology, to use a Jungian phrase, is our collective unconscious projected onto story--onto a movie screen. Mythology is a literary way of giving our inner anxieties and hope meaning. Through mythology we write about ourselves and our place in the cosmos.

Are these mythologies "real?" Yes and no.

They are not real if we think of real as being scientific or historical.
Adam and Eve never existed.
Elohim did not create the universe in six days.

They also may be real in another sense. They may represent a reality beyond that which we see with our senses. When we enact rituals toward Yahweh, Jesus, or Sophia, we may be praying to a spiritual reality that does exist even though we (humankind) have created the symbols for this reality.

Point 1: This needs to be said because of the literalism that has dominated Christianity (ie. creationism). The creation myths of the Bible are neither scientific nor historical. They tell us nothing about how Earth and the Universe has come to be nor how homo sapiens have evolved. The sooner Chrisitianity understands its story as mythological, the sooner we will be able to move toward a more authentic faith for our time.

Point 2: These mythologies were created in a time when Earth was seen as the center of the cosmos. See Setting the Stage: How the Ancients Viewed the Cosmos. We need a modern mythology reflecting what science has shown us regarding Earth and the Universe.

Point 3: The biblical myths of creation have precursors in Summerian and Babylonian mythology. They also have echoes with mythologies from cultures outside the Ancient Near East. They utilize common symbols. They adapted these symbols and characters to create their myths. See Enuma Elish.

Point 4: The Bible is literature. It was created over centuries with many voices contributing to its narrative. See Father Guido Sarducci and Julius Wellhausen.

Point 5: When we see the biblical myths in their context as a human response to their anxieties we can appreciate them and draw from them for our context.

How can we make use of the biblical creation myths?
Before we ask that question, we need to ask: what anxieties do these myths address?

Here is a summary of the four principle creation mythologies in the Bible:

1: Yahweh conquers and subdues chaos. See Rahab, Leviathan and Behemoth: The Chaotic Trinity. Life is chaotic. Destructive forces are all around us. Floods, wars, sickness, death. Is someone in control? Will we be overtaken by these forces of destruction? Will our enemies destroy us? Who or what is our enemy? The myth of Yahweh subduing Leviathan puts these fears into a larger picture of the power of creation over chaos.

2: Yahweh creates the first humans. See Adam, Eve, and the Serpent. What is the difference between humans and animals? What does it mean to be conscious? Why are we ashamed of our nakedness? What is knowledge and why is it desirable and what are its negative consequences? Why do brothers kill each other? Why do we die? Will Elohim care for us?

3: Elohim creates Earth and Sky in six days and rests on the seventh. See Setting the Stage and Enuma Elish. Life is not good. Nature is a threat. Humankind works endlessly to survive. We have little value. We are slaves. In response, Genesis 1 tells us that Elohim has ordered the cosmos. Humankind is created in the divine image. Sabbath is a gift to us.

4. Sophia (Wisdom) creates and is the foundation for the cosmos. See Getting Wise with the Wisdom Woman: Sophia and Creation. Human beings are stupid. There is no wisdom in this world. Earth is a tragedy, a mean joke, and the most ignorant are in control. Sophia responds that wisdom is really the foundation of Creation. Do not despair, trust in wisdom.


Certainly there is much more to say about these mythologies. The beauty of mythology is that there are many interpretations. Many of the anxieties we face have been faced by our ancestors.

What might we take from these mythologies of creation as we create our own myths and our own rituals?

Again, I think we begin by naming our anxieties. Here are some of my personal anxieties. Perhaps you have many of the same ones:


And I have other anxieties.